For all books else appear so mean, so poor

It is often assumed that the United Nations body termed the IPCC represents an “International Panel on Climate Change”. Instead, in actuality the “I” stands for “Intergovernmental”. This apparently small detail is of supreme significance, because it signals that the recommendations made by the IPCC are those of a political, and not a scientific, organization.

True to that form, the IPCC’s reports provide the basic framework upon which governments, both state and federal, construct their policies to combat global warming. For instance, the Queensland Minister for Climate Change tells concerned citizens who write to him about the matter that:

“The Queensland Government, along with the Australian Government and governments around the world, supports the findings of the Intergovernmental Panel on Climate Change, which is the world’s leading authority on climate change. The IPCC advises governments and others interested in climate change with an objective source of information about climate change, based on peer reviewed scientific literature”.

Though it is true that the IPCC’s reports contain much useful scientific information, it is also the case that they are based upon biased editorial and peer review procedures and have been subjected to extended and severe criticism by independent scientists. As summarized by Idso and Singer on the first page of their new book:

“While AR4 [4th Assessment Report, Intergovernmental Panel on Climate Change] is an impressive document, it is far from being a reliable reference work on some of the most important aspects of climate change science and policy. It is marred by errors and misstatements, ignores scientific data that were available but were inconsistent with the authors’ preconceived conclusions, and has already been contradicted in part by research published since May 2006, the IPCC’s cut-off date”.

The launching of the compendious Climate Change Reconsidered – a new summary of climate change science similar in scope to the IPCC’s 4th Assessment Report, but written by scientists who are independent of political or other allegiances – was perhaps the single most important event that happened at the Heartland-3 climate conference. 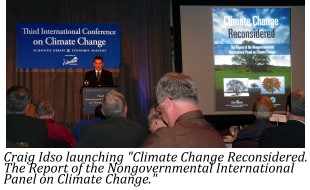 Climate Change Reconsidered, the 2009 report of the Nongovernmental International Panel on Climate Change (NIPCC), is a comprehensive 880-page tome that rigorously analyses the IPCC’s claim that dangerous global warming has “very likely” been caused by human greenhouse emissions. Co-authored by Drs. Craig Idso and Fred Singer, with editing assistance from another 30 expert scientists from 16 countries, Climate Change Reconsidered provides a comprehensive refutation of IPCC global warming alarmism, based on summary discussion of relevant and recent scientific publications.

Climate Change Reconsidered represents the report that the IPCC should have written but didn’t. Instead of accepting the faulty null hypothesis that observed environmental changes are due to human influence, and citing circumstantial evidence in favour of it, the NIPCC report provides tests for the parsimonious null hypothesis that observed climate changes are natural unless and until evidence to the contrary emerges.

Twenty years have elapsed since the formation of the IPCC, yet, despite the expenditure of many tens of billions of dollars and the efforts of hundreds of committed scientists since then, the research summarized in the 4AR IPCC and NIPCC reports provides no evidence that falsifies the null hypothesis of natural climate change.

In his comments at the NIPCC book launch, Fred Singer (University of Virginia) commented succinctly about global warming that “there is no scientific consensus: the science is not settled”.

Furthermore, Singer said, the IPCC has failed to provide any evidence that suggests the occurrence of dangerous human-caused global warming. In particular:

No evidence exists that any rise in global temperature over the last 50 years is a result of human influence;

Current rates of ice/glacier melt are not unusual;

Current weather (including tropical storms, droughts and floods) is not unusual;

No correlation exists between increasing atmospheric carbon dioxide and temperature; and

Efforts to mitigate human carbon dioxide emissions are ineffectual and unlikely to have any impact on future concentrations.

Climate Change Reconsidered is essential reading for all professional persons who are involved with climate change research or policy formulation. It comprises a one-stop-shop where readers can find accurate information about climate change and well-balanced critical appraisal of the global warming hype in which the world is presently drowning.

Have you ordered your copies yet, Bob Brown and Christine Milne?