Joanne Nova’s lively The Skeptics Handbook has been published in the US with an astonishing 150,000 copies print run which will be distributed to thousands of politicians, scientists, journalists and teachers. A further  10,000 copies are being published for Australia and New Zealand.

The problem for climate realists is that there is just too much to pick from. The Skeptics Handbook makes things simple. For those who are looking for a way through the quicksand of the Climate Change debate, it’s surgical strike. Only a few points are make-or-break points, and most of the others will drop you in an endless circuit of scientific tit for tat.

Carbon’s role is not obvious in the ice cores. It’s possible that once the warming begins, the oceans release carbon, and then that carbon adds a bit to the warming, but that small amplification could be inconsequential. Remember, we’re considering changing the source of energy that human civilization is built on. Extra carbon warms the planet—sure, but is that warming significant? The difference between ‘minor warming’ and ‘unmeasurable warming’ is the difference between a 3 degree rise or a half degree rise. 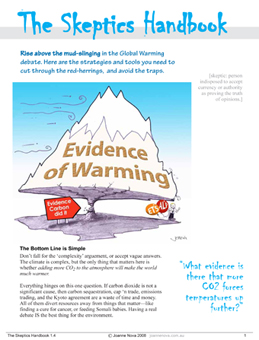 It’s not ok to change the source of 80% of the energy that feeds us, moves us, and warms us, without some scientific backing. We’re not asking for 100% proof, just reasonable evidence, and no one seems to be able to find any.

It was finding out about the lag in the ice cores that shocked me. Until then, I believed carbon dioxide was important, but I also believed the media was giving me the full story (more fool me). When I discovered in 2007 that researchers had known about the lag for four years and that it was almost never mentioned in popular scientific publications, which I read regularly, suddenly it was clear that basic information about global warming was being censored.

When I searched I discovered the astonishing truth—that despite all the assertions of the overwhelming evidence—no one can name a single paper with empirical evidence that shows that extra carbon has a measurable effect on the climate. That’s what inspired me to put together The Skeptics Handbook.

The Tip of a JCU’s Junk Science Iceberg