What the polls aren’t telling you about Mme $5 Billion

When a Labor Prime Minister was dismissed 35 years ago, the ALP exploded in outrage. Although he lost the following election in a landslide, Gough Whitlam will forever be a Labor martyr.

Kevin Rudd was not dismissed by a reluctant viceroy doing his constitutional duty. Nor was he “gillardined” for allowing Labor’s two party preferred vote to linger around 50 per cent.

He was sent packing for the simple reason that polling indicated he had lost sufficient seats in the so called mining states to ensure Labor’s defeat. And that has not changed.

Rudd was done in by what Labor friendly Fairfax commentator Peter Hartcher described as a “handful of powerbrokers almost completely unknown to the Australian people.”

He was certainly not removed for egregious profligacy or administrative incompetence; those charges equally implicate Julia Gillard, Wayne Swan and Lindsay Tanner. 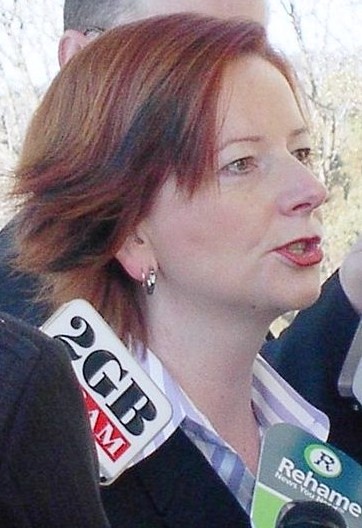 Ms. Gillard’s accession attracted the predictable national opinion poll bounce, massaged  by a gallery obsessed with the idea of a woman being prime minister. Fortunately for Ms. Gillard, they did not have to choose – as their American colleagues had to – between colour and sex. The US example suggests that for progressive journalists, race outranks gender.

Those over awed by the poll bounce should recall Cheryl Kernot’s move to Labor, and the rejoicing which dominated such progressive  redoubts as the letters page of the Sydney Morning Herald. She was widely predicted to become the first woman prime minister.

The Gillard bounce is sure to recede, hence the incentive to go to an early election. However the powerbrokers know not to be too impressed by these early rushed nationwide polls.

They know that country and outer suburban Australia tend to be more sceptical, some would say smarter, than the inner city elites. After all how many breaks did they give the NSW Labor government?

Add to that the three “mining” states are seething about the super profits tax. (The other states are of course also directly and indirectly dependent on mining.) This does not show up in a national poll, which means that led by the elites the cities are overreacting about Julia Gillard. I would imagine she is getting star billing in Wentworth.

The elites are living examples of the adage attributed to Chesterton that when man stops believing in God, it is not that he believes in nothing.  He (or she) will believe in anything.

From republicanism through the ETS down to the super profit tax, the electorates away from the inner cities have been overwhelmingly sceptical, indeed hostile. And without criticising her, it is unlikely that a woman of Ms. Gillard’s ambitions and style would appeal outside of say, cosmopolitan Wentworth. A man like the Leader of the Opposition clearly does.

The decline of Kevin Rudd in the polls comes from the accession of Tony Abbott, a result thought laughable by the gallery at the time. Abbott went straight on the attack when most of the gallery remained on their summer holidays. He destroyed the chances of Rudd taking a concluded ETS to Copenhagen. (And if anyone seriously thought the Chinese, Indians and Americans were going to be impressed by an Australian ETS, they should give up politics and media commentary.)

In addition Rudd (and Ms. Gillard) presided over two significant changes in thinking in rank and file Australia. First, there has been the complete collapse of trust in the mainstream media.  The electorate has not forgotten that the mainstream media campaigned for Rudd and then protected him for at least the first two years.

It is not surprising then that, according to Essential Media’s recent survey, the media is trusted even less than the banks. This has led to increased attention to the alternative media, the internet and radio talkback. There the role of 2GB has been crucial, first Alan Jones on the ETS and Ray Hadley on the BER. (The national newspaper is seen by the rank and file as closer to the alternative media than the mainstream. This is because it is more often relied on there.)

The second significant change in rank and file thinking brought on by Rudd was the result of his grab for 30% of the GST and then the super profits tax.

He has succeeded in reviving federalism, especially in the States further from Canberra. This revival is beyond the wildest dreams of the Samuel Griffith Society.

Few West Australians  or Queenslanders – and I suspect few South Australians- now think their minerals belong to the “people of Australia”.

First when they hear federal politicians claiming to be trustees for the people of Australia, they hear this as code for nothing more than political greed and waste. The rank and file in these states believe – and constitutionally they are on sound ground – that the minerals are the States’.

So while there may well be a temporary bounce in the national polls, weighed down as they are by inner city respondents, in the crucial marginal electorates especially in the mining states people are still suspicious.

And stand by for the Nationals and the Liberals naming Ms. Gillard as “Ms. Five billion.” The facts are simple and on this the gallery has a duty to call her to account.

She was handed a massive $16.2 billion for the BER stimulus.  She failed in her duty to put in place the most elementary safeguards to see the taxpayers got value for money. As the scandals grew she was in denial, until too late. Now that the horse has bolted, she has appointed Brad Orgill to undertake a Clayton’s review.

Orgill has been compromised by evidence before the NSW parliamentary Inquiry where he followed too closely  the Gillard line. And that has been heard across  the marginals, thanks to the ever diligent Mr. Hadley.  Orgill now concedes  he cannot protect witnesses.

Of course what should now be in place is a public AWB style judicial inquiry, a Royal Commission,  where documents can be subpoenaed, sworn evidence taken on oath and subject to rigorous cross examination, and witnesses protected.

Many in the media whinged about the AWB terms of reference,   although the Howard government said these would be changed if the judge asked.

Where is the outcry now over the clear and compelling need for a proper inquiry about a scandal potentially involving many billions and not millions? This is the biggest financial scandal in the history of Australia. Julia Gillard presided over this.

Where did the billions go? Did some of it come back to the Labor Party?

Who is the gallery protecting?

Until the Prime Minister appoints such a judicial inquiry she is lacking in credibility.

Nor will she have any if she does not resolve the super profits fiasco. This involves not some compromise deal but admitting that this has nothing whatsoever to do with the federal government and everything to do with the state governments.

The solution for Labor may not indeed lie with Ms. Gillard.

In the wake of the political assassination it became clear that one minister at least was not involved and somewhat taken aback. This is a minister who has been extremely capable, who is always courteous and who is a credit to Australia. This is the Western Australian Minister for Foreign Affairs, Stephen Smith, who looks and behaves like the nation’s chief diplomat.

And unlike Mme $5 Billion he is completely untainted by the silliness, profligacy, incompetence and the financial scandal presided over by that four person politburo.