The Emperor has no clothes

“The Emperor has no clothes,” the Prime Minister apparently declares about free market capitalism. This is in an essay in a coming issue of a Melbourne review. The essay is being heavily promoted by the government’s spin doctors who flooded the media with their line on it in time for the weekend broadsheets. 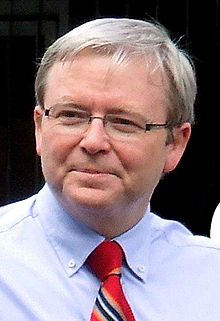 No doubt to the Prime Minister’s dismay, a leading Labor power broker recently implied the very same thing about him. From this, we can assume that the penny is finally beginning to drop.

The truth is that neither Kevin Rudd nor anyone in his government seems to have any idea about what to do in the current crisis. It will take some time before all this filters down through the clouds of spin which like incense surround the prime ministerial throne, and then past his adoring acolytes in the media.  When this truth finally dawns, as it must, those ludicrous prime ministerial satisfaction levels in the polls will fall.

There is a realisation of this in the government where the option of an early election is said to be under consideration. There are two problems with that. Too early and the Governor-General will not be happy and even if Her Excellency allows it, the people are sure to be annoyed.

In the meantime the government, which once charged John Howard with the offence of spending like a drunken sailor, seems now intent on spending every cent of the aggregated surplus which Peter Costello hoarded. As John Stone has rightly observed, how very foolish that was of Mr. Costello.   If anything can be called a wasted opportunity that was.

Did the Liberals think they would be in power forever? Or did they think that with Latham gone, the opposition was ready for government?   A quick check shows no one of the financial understanding  of Hawke minister, Peter Walsh or former NSW Treasurer, Michael Costa.

A drover’s dog could have told Peter Costello that the best place to put the surplus was with the unfortunate people from whom the money was taken. They would at least be less inclined to waste their own money. And if they did, it was theirs anyway.

The tip of the iceberg of the media’s gradual agonising reappraisal of the Rudd government is the interest shown in Rudd’s overseas travel from the gossip columnist end of the political commentary market.  Crikey is one example.   Flying to 32 international destinations since November 2007, Mr. Rudd’s travel bill just for the period January to June 2008 was $600,000.

Now everyone knows – or ought to know – that the decisions taken at almost any international gathering of any importance are settled in advance by laborious exchanges mainly between public servants. The leaders usually just turn up at the end for the photo opportunities which are designed by taxpayer funded spin doctors to keep the polls up so that re-election is ensured.

The travel bill is high and will not go down well in the electorate. But what is much more worrying is the quality of the decisions taken in relation to the economy.  One of the most recent, the $ 4 billion Australian Business Investment Partnership, has attracted scathing criticism from the former New South Wales Labor Treasurer Michael Costa. He says this has confirmed Kevin Rudd’s inability to provide reasoned and financially responsible responses to our economic problems.

Rudd says his reason for exposing the taxpayer to financial risk in the commercial property sector is to save jobs. Costa points out this argument is not only weak, it lacks credibility.  Why single out for special protection only those jobs  in the highly unionised sectors represented by ALP-affiliated unions?

Rudd says the other justification for this is that half of the $285 billion in syndicated loans to Australian businesses was made by foreign banks and that $75 billion of these loans are to fall due over the next two years.  But Treasurer Wayne Swan told 2GB’s Alan Jones on 19 January: "No, the banks are not, at this stage, having problems accessing what’s called term finance, internationally. Many of the banks, just prior to Christmas, were very successful in their fundraising activities overseas."

Costa asks whether something dramatic happened between January 19 and 24, when the partnership announcement was made.

The government claims investment in the commercial property sector is profitable and the greater part of lending there is domestic. Why then can’t they borrow in the domestic capital market?

If these companies had falsely inflated their values, Costa correctly says the projects will be taken over by other players. The project will have to meet the cost of the capital plus an appropriate return to their shareholders or investors.  Rudd says that if banks “do not allow clients to refinance as they would in normal conditions then companies can be forced to sell assets, often at low value".

But as Costa says, “Rudd doesn’t understand that there was nothing normal about the lending practices during the property boom and so-called low value might be the right market value.”

The Prime Minister has built up in little over a year a very poor record in financial management. The bank guarantee was rushed when there was no urgency apart from making the Sunday 6:00 pm news and the need to provide something to support the vacuous standing claim that the Rudd government is “ahead of the curve.”

For the very first time in our history, a government had actually caused a run on sound deposit funds actually created by an Australian government. Hundreds thousands of Australians, including many whose superannuation funds are in danger of breaching the law, are still being denied full access their funds. The Treasurer’s answer was to tell them to go to Centrelink.

Then there was the spectacle of the government’s foolish fiscal stimulus, when all welfare recipients received substantial lump sums in time for Christmas at the cost of $10 billion. Many of the recipients had no proven record of handling such lump sums.

The latest matter for concern  is the prediction of the National Australia Bank the federal budget deficit next year will be an astounding $40 billion dollars.

If that is so, the imagined inflation genie which so mesmerised Kevin Rudd Wayne Swan and the Reserve Bank in late 2007 and much of 2008 will return with hyperinflationary vengeance.

In comparison, the Whitlam government will then seem to has been a time of financial rectitude.