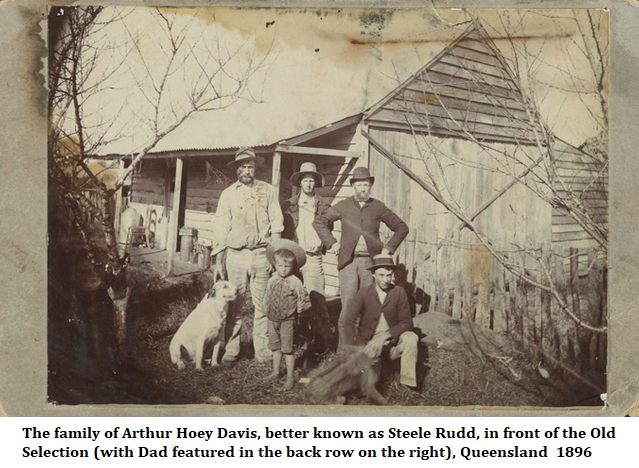 Three days to Christmas; and how pleased we were! For months we had looked forward to it. Kate and Sandy, whom we had only seen once since they went on their selection, were to be home. Dave, who was away shearing for the first time, was coming home too. Norah, who had been away for a year teaching school, was home already. Mother said she looked quite the lady, and Sal envied the fashionable cut of her dresses.

Things were in a fair way at Shingle Hut; rain had fallen and everything looked its best. The grass along the headlands was almost as tall as the corn; the Bathurst-burr, the Scotch-thistles, and the “stinking Roger” were taller. Grow! Dad never saw the like. Why, the cultivation wasn’t large enough to hold the melon and pumpkin vines—they travelled into the horse-paddock and climbed up trees and over logs and stumps, and they would have fastened on the horses only the horses were fat and fresh and often galloped about. And the stock! Blest if the old cows didn’t carry udders like camp-ovens, and had so much milk that one could track them everywhere they went—they leaked so. The old plough-horses, too—only a few months before dug out of the dam with a spade, and slung up between heaven and earth for a week, and fed and prayed for regularly by Dad—actually bolted one day with the dray because Joe rattled a dish of corn behind them. Even the pet kangaroo was nearly jumping out of its skin; and it took the big black goanna that used to come after eggs all its time to beat Dad from the barn to the nearest tree, so fat was it. And such a season for butterflies and grasshoppers, and grubs and snakes, and native bears! Given an ass, an elephant, and an empty wine-bottle or two, and one might have thought Noah’s ark had been emptied at our selection.

Two days to Christmas. The sun getting low. An old cow and a heifer in the stock-yard. Dad in, admiring them; Mother and Sal squinting through the rails; little Bill perched on one of the round posts, nursing the steel and a long knife; Joe running hard from the barn with a plough-rein.

Dad was wondering which beast to kill, and expressed a preference for the heifer. Mother said, “No, kill the cow.” Dad inspected the cow again, and shook his head.

“Well, if you don’t she’ll only die, if the winter’s a hard one; then you’ll have neither.” That settled it. Dad took the rope from Joe, who arrived aglow with heat and excitement, and fixed a running noose on one end of it. Then—

Joe threw his hat at them, and chased them round and round the yard. Dad turned slowly in the centre, like a ring-master, his eye on the cow; a coil of rope was in this left hand, and with the right he measuredly swung the loop over and over his head for some time. At last the cow gave him a chance at her horns, and he let fly. The rope whizzed across the yard, caught little Bill round the neck, and brought him down off the post. Dad could hardly believe it. He first stared at Bill as he rolled in the yard, then at the cow. Mother wished to know if he wanted to kill the boy, and Joe giggled and, with a deal of courage, assured Dad it was “a fine shot.” The cow and the heifer ran into a corner, and switched their tails, and raked skin and hair off each other with their horns.

“What do you want to be always stuck in the road for?” Dad growled, taking the rope off little Bill’s neck. “Go away from here altogether!” Little Bill went away; so did Mother and Sal—until Dad had roped the cow, which was n’t before he twice lassoed the heifer—once by the fore-leg and once round the flanks. The cow thereupon carried a panel of the yard away, and got out and careered down the lane, bucking and bellowing till all the cattle of the country gathered about her.

Dad’s blood was up. He was hanging on to the rope, his heels ploughing the dust, and the cow pulling him about as she liked. The sun was setting; a beautiful sunset, too, and Mother and Sal were admiring it.

“Did y’ never see th’ blasted sun go—go down be——” Dad didn’t finish. He feet slid under a rail, causing him to relax his grip of the rope and sprawl in the dust. But when he rose!

“Are y’ going t’ stand staring there all night?” They were beside the rails in an instant, took the end of the rope which he passed to them, put it once round the gallows-post, and pulled-pulled like sailors. Dad hung on close to the cow’s head, while Joe kicked her with his bare foot and screwed her tail.

“Steady!” said Dad, “that’ll about do.” Then, turning to the women as he mounted a rail and held the axe above the cow’s head: “Hang on there now!” They closed their eyes and sat back. The cow was very patient. Dad extended himself for a great effort, but hesitated. Joe called out: “L-l-ook out th’ axe dud-dud-don’t fly and gug-gug-get me, Dad!” Dad glanced quickly at it, and took aim again. Down it came, whish! But the cow moved, and he only grazed her cheek. She bellowed and pulled back, and Mother and Sal groaned and let the rope go. The cow swung round and charged Joe, who was standing with his mouth open. But only a charge of shot could catch Joe; he mounted the rails like a cat and shook his hat at the beast below. 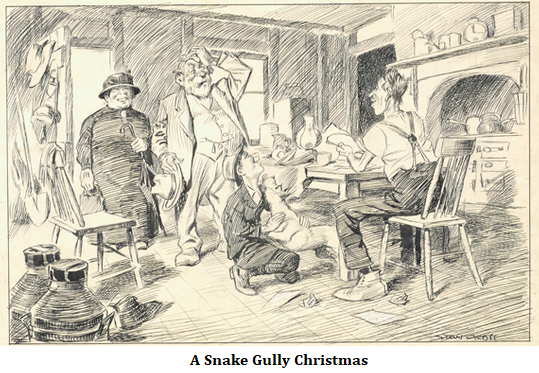 After Dad had nearly brained her with a rail the cow was dragged to the post again; and this time Dad made no mistake. Down she dropped, and, before she could give her last kick, all of us entered the yard and approached her boldly. Dad danced about excitedly, asking for the long knife. Nobody knew where it was. “Damn it, where is it?” he cried, impatiently. Everyone flew round in search of it but Joe. He was curious to know if the cow was in milk. Dad noticed him; sprang upon him; seized him by the shirt collar and swung him round and trailed him through the yard, saying: “Find me th’ knife; d’ y’ hear?” It seemed to sharpen Joe’s memory, for he suddenly remembered having stuck it in one of the rails.

Dad bled the beast, but it was late before he had it skinned and dressed. When the carcase was hoisted to the gallows—and it seemed gruesome enough as it hung there in the pallid light of the moon, with the night birds dismally wailing like mourners from the lonely trees—we went home and had supper.

Christmas Eve. Mother and Sal had just finished papering the walls, and we were busy decorating the place with green boughs, when Sandy and Kate, in their best clothes—Kate seated behind a well-filled pillow-slip strapped on the front of her saddle; Sandy with the baby in front of him—came jogging along the lane. There was commotion! Everything was thrown aside to receive them. They were surrounded at the slip-rails, and when they got down—talk about kissing! Dad was the only one who escaped. When the hugging commenced he poked his head under the flap of Kate’s saddle and commenced unbuckling the girth. Dad had been at such receptions before. But Sandy took it all meekly. And the baby! (the dear little thing) they scrimmaged about it, and mugged it, and fought for possession of it until Sandy became alarmed and asked them to “Mind!”

Inside they sat and drank tea and talked about things that had happened and things that hadn’t happened. Then they got back to the baby and disagreed on the question of family likeness. Kate thought the youngster was the dead image of Sandy about the mouth and eyes. Sal said it had Dad’s nose; while Mother was reminded of her dear old grandmother every time the infant smiled. Joe ventured to think it resembled Paddy Maloney far more than it did Sandy, and was told to run away and put the calves in. The child wasn’t yet christened, and the rest of the evening was spent selecting a name for it. Almost every appellation under the sun was suggested and promptly rejected. They couldn’t hit on a suitable one, and Kate wouldn’t have anything that wasn’t nice, till at last Dad thought of one that pleased everybody—“Jim!”

After supper, Kate started playing the concertina, and the Andersons and Maloneys and several others dropped in. Dad was pleased to see them; he wished them all a merry Christmas, and they wished him the same and many of them. Then the table was put outside, and the room cleared for a dance. The young people took the floor and waltzed, I dare say, for miles—their heads as they whirled around tossing the green bushes that dangled from the rafters; while the old people, with beaming faces, sat admiring them, and swaying their heads about and beating time to the music by patting the floor with their feet. Someone called out “Faster!” Kate gave it faster. Then to see them and to hear the rattle of the boots upon the floor! You’d think they were being carried away in a whirlwind. All but Sal and Paddy Maloney gave up and leant against the wall, and puffed and mopped their faces and their necks with their pocket-handkerchiefs.

Faster still went the music; faster whirled Sal and Paddy Maloney. And Paddy was on his mettle. He was lifting Sal off her feet. But Kate was showing signs of distress. She leaned forward, jerked her head about, and tugged desperately at the concertina till both handles left it. That ended the tussle; and Paddy spread himself on the floor, his back to the wall, his legs extending to the centre of the room, his chin on his chest, and rested.

Then enjoyment at high tide; another dance proposed; Sal trying hard to persuade Dad to take Mother or Mrs. Maloney up; Dad saying “Tut, tut, tut!”—when in popped Dave, and stood near the door. He had n’t changed his clothes, and was grease from top to toe. A saddle-strap was in one hand, his Sunday clothes, tied up in a handkerchief, in the other, and his presence made the room smell just like a woolshed.

“Hello, Dave!” shouted everyone. He said “Well!” and dropped his hat in a corner. No fuss, no kissing, no nothing about Dave. Mother asked if he did n’t see Kate and Sandy (both were smiling across the room at him), and he said “Yairs”; then went out to have a wash.

All night they danced—until the cocks crew—until the darkness gave way to the dawn—until the fowls left the roost and came round the door—until it was Christmas Day!