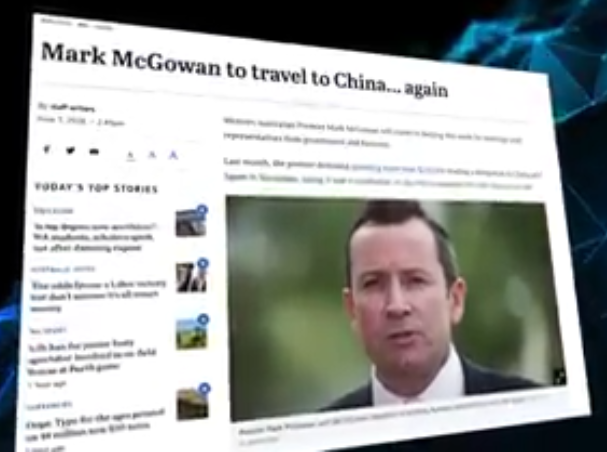 After a third case of community transmitted coronavirus was reported, the West Australian government imposed draconian new measures which command its citizens to stay at home . Premier Mark McGowan has decreed that this new lockdown “will be in place for four days at a minimum”.[1] As a consequence, people living in Perth and the Peel region are now forced to stay at home unless they require to shop for essentials, attend medical appointments, or to get vaccinated. They cannot even go to work unless the state authorities regard them as providing “essential” service.[2]

This is happening amidst growing evidence that lockdowns do not necessarily reduce the mortality. To the contrary, in a recent working paper published by the US National Bureau of Economic Research, four renowned economists and scientists from the University of Southern California and the Rand Corporation concluded there is absolutely no relationship between lockdowns and COVID-19 cases and deaths.[3] “The evidence supporting [lockdowns] is shockingly weak, resting on little more than anecdote, faith and tendentious modelling”, co-author Neeraj Sood told The Australian.[4]

For the WA Labor government, of course, it does not really matter if, like communism, lockdowns may seem reasonable in theory but don’t work in practice. Curiously, a video has emerged from a meeting held in February 2020 by West Australian Premier McGowan and Chinese Communist Party officials attached to its consulate in Perth.  Also present are Tourism Minister Paul Papalia and Labor backbencher Pierre Yang MLC. In this video Premier McGowan and all present, in Chinese, exhort: “Go Wuhan! Go China! China First!” [5] Find that hard to believe? Just watch the video below.

The clip was shot not long after after a virus that appears to have been leaked from a lab in the Chinese city of Wuhan began wreaking havoc around the world, Australia included.

In a June 7 article in The Australian, Dr Steven Quay MD, who holds both a masters and a doctorate degree from the University of Michigan, and Richard Muller, an emeritus professor of physics at the University of California-Berkeley, informed that COVID-19 is a million-to-one proposition to have arisen naturally. Instead, they think it extremely likely the novel coronavirus was created in the CCP lab at the Wuhan Institute of Virology.[6]

Beijing should come clean about the origins of COVID-19. Instead, the Chinese government has recently hit Australia with a series of tariffs on goods ranging from crayfish to wine. “China is using economic coercion to bully and intimidate Australia”, argues French President Emmanuel Macron, who has described such tactics as a “blatant breach of international law and declared France stood with Australia”.[7]

The Australian Prime Minister has the moral duty to protect our sovereignty and future, and to ensure we don’t become a vassal state of that communist regime. But who would have thought the WA Premier would stand proudly with the Chinese regime? Instead of standing beside the federal government, McGowan has accused Scott Morrison of increasing trade tensions with China by refusing to bow to their pressure and intimidation.[8] In fact, the Premier has repeatedly stated that Australia needs to “work constructively” with Beijing. “We can have … a great friendship and trading relationship with China,” he told reporters.[9] “I know in some quarters it might be popular … to attack China because they do have a different system of government, a different way of doing things to us, but you’ve always got to think what the consequence might be,” McGowan said.[10]

Speaking at the Australian Petroleum Production and Exploration Association conference in June, Premier McGowan told the 1700 delegates: “The federal talk of conflict, trade retaliation can and must stop.”[11] Premier McGowan also said comments in recent months from senior politicians and officials about a potential conflict with China were “off the planet”. He claims that Australia could still keep its values without coming to blows with China. “All this language I see coming out of the Commonwealth government about us going to war with China, I have never heard something so insane in my life,” he said.[12]

I don’t recall anyone in the Australian government talking directly about going to war with China.  Can the WA Premier direct me to when the Prime Minister has ever said or implied that we are going to war with China? In fact, Scott Morrison has insisted Australia has no desire for war with the Middle Kingdom. At the recent G-7 meeting of world leaders in London he insisted: “That is not an outcome that we would wish for in any circumstance”.[13]

The WA Premier has been tireless in warning the Australia government about “provoking” Beijing, and he has been doing it since May last year, even offering to help rebuild the relationship last December. Why, what’s his motivation? Maybe McGowan has some real sympathy for that communist regime, as is the case with his Victorian counterpart, Daniel Andrews, frequent visitor to Beijing and Belt & Road advocate.  I haven’t heard anything from McGowan about him denouncing the CCP’s atrocious handling of the coronavirus pandemic or the suppression of its own citizens’ right to free speech and other fundamental rights of the individual.  Above all, the Premier should stick to state issues and leave federal politics to those in charge. As noted by Greg Sheridan in The Australian:

West Australian Premier Mark McGowan’s criticism of Morrison’s language on China is characteristically foolish and provincial.  McGowan serves Beijing’s interests by reinforcing the idea Beijing has the right to censor Australian speech. There was nothing in Morrison’s words which Beijing could reasonably find offensive, there was plenty it could unreasonably overreact to, which McGowan’s dopey reaction encourages.[14]

But who would have thought that an Australian Premier would be China’s poster boy, such a proud achievement for McGowan? Responding to a question by the CCP-controlled Beijing Daily, China’s foreign ministry spokesman Zhao Lijian has praised McGowan’s support for Chinese interests in the country. “The Australian government should heed these constructive opinions,” said Mr Zhao at a regular press conference in Beijing.[15]

As can be seen, Beijing thinks Australia should listen to McGowan and follow his lead.[16] It is certainly no compliment to be praised by a regime with blood on its hands and for which fundamental human rights are there to be violated. McGowan should know that any criticism he makes of the Australian government will now generate support from China. Communists describe people like him as “useful idiots”, as Lenin reputedly called them. The phrase is used to designate a person who can be manipulated to advance a foreign interest or political agenda.

It goes without saying that the WA Labor government has recently appointed two pro-Beijing community leaders to a paid advisory council before McGowan escalated his criticism of Australia’s handling of the China relationship.[17] Journalists Marta Pascual Juanola, Eryk Bagshaw and Hamish Hastie did our society an enormous favour by revealing these incestuous relations between the WA Labor Government and the Chinese Communist Party:

In February, his government has appointed Dr Edward Zhang and Dr Ting Chen, as the only two Chinese community representatives, to his 15-member… policy advisory board where members can earn up to $385 per day.

Zhang … has condemned the [Australian] government’s position on the disputed South China Sea. ‘We overseas Chinese are the first line of defence for our motherland”, he said in 2016.

Zhang is a founding member and honorary chairman of the WA branch of the Australian Council for the Promotion of the Peaceful Reunification of China, a group tied to United Front. The United Front operates networks that mobilise support for the Chinese Communist Party.[18]

Another article from December 2019 reveals that shortly after taking office the WA Premier announced the state was giving around $200 million of WA taxpayers’ money to Huawei for a contract to build and maintain a mobile data network for Perth’s metropolitan railway system. Those in eastern states might not be aware of the much-vaunted Metronet, which is billed as a huge boon to the people of Perth but, after four years, has yet to see a single metre of laid track.[19]

Quite a few other examples could be given but all of this poses the question: Whose interests is the West Australian Premier putting first?

Australia introduced the Foreign Influence Transparency Scheme (FITS) in 2018, which aimed at providing the public with “visibility of the nature, level and extent of foreign influence on Australia’s government and politics”. This federal law was especially enacted to deter undue influences from China but without naming the country.

Has McGowan ever considered registering? Perhaps he should.

How Xi Jinping Is Reshaping the World