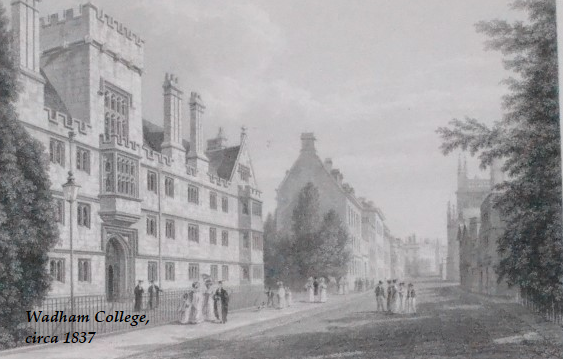 Like many young West Australians in the 1960s, Quadrant contributor Nick Hasluck set sail for London  — in his case for a post-graduate law degree at Oxford, but looking also for new horizons and a parallel career as author. Today he is esteemed as novelist (a dozen to date, many of the ‘moral/thriller’ genre), poet, playwright and historian. Incidentally, he was a judge of the WA Supreme Court from 2000-10. Here’s an extract from his newly published memoir Beyond the Equator. — Tony Thomas

The Warden of Wadham College

I LEFT the station and set off for the city of dreaming spires in a cheerful mood. My immediate task was to locate Wadham College. I was aware that the University of Oxford has no palpable identity and consists essentially of various colleges linked by rules emanating from a central administration. I knew also that it was situated in the centre of a market town. I was about to discover that Oxford is a labyrinth, literally and metaphorically, and getting to grips with the place isn’t easy. Ancient streets lead to a view of Woolworths or the Town Hall. College entrances are to be found only a few paces away from a coffee shop or a newsagency. A pharmacy is overshadowed by a monument. I began to feel like Stanley looking for the elusive Dr Livingstone in the depths of some strange architectural jungle.

I worked my way through narrow side streets bordered by large forbidding walls. I forced a passage past bookshops, laundrettes, bike shops, men’s outfitters, restaurants and churches. I entered what appeared to be a main thoroughfare bustling with cars, cyclists and pedestrians. Here, the street face consisted of supermarkets, old hotels and the offices of solicitors, agents and accountants. Buses hooted at me as they edged into the crowded kerb, scooping up queues of housewives with bulging shopping bags.

I struggled onwards, encumbered by my bag and a recently-acquired umbrella, becoming conscious as I did so that the shop fronts were thinning out, the cyclists were roaming in twos and threes rather than in packs, the queues were diminishing and the laneways getting smaller. I caught a glimpse of botanical gardens and park benches. I came to a river crossed by an old stone bridge. On its banks, like a monastery, stood a massive bell-tower enclosed by high, impenetrable walls.

The road on the far side of the bridge led to terraced houses and neat front gardens. It became clear to me that I had walked right through the town and was close to being out the other side. Enquiries made of passers-by produced only vague gestures towards the ancient piles behind me, together with suggestions that I ‘ask at the gate’. Much later, I managed to find my way to Wadham College. It was an imposing structure flanked by the King’s Arms Tavern, on the corner of Holywell Lane and Broad Street.

The College was founded by Nicholas and Dorothy Wadham in the seventeenth century. The first Warden was impeached and sent to the Tower of London. Alumni of the College include various notables mentioned in Pepys’ diary such as Wilkins, Sedley, Seth Ward and Sir Christopher Wren. Many of the Restoration wits went through the College including, the scatological poet and notorious rake, Lord Rochester.

The list of notorious alumni includes the famous lawyer, F.E. Smith (left), who later became Lord Birkenhead. He prosecuted the Irish dissident Roger Casement in the course of the Great War and was renowned for his crisp exchanges with the bench. When a choleric judge insisted that he be given credit for knowing some law, and

went on to enquire sarcastically ‘How do you think I became a judge?’, F.E. Smith (as he then was) retorted: ‘It is not for me to fathom the inscrutable workings of providence.’

This reply was in much the same vein as various caustic remarks attributed to F.E.Smith’s political contemporary, Winston Churchill. Both men would probably subscribe to the aphorism for which F.E.Smith, by then Lord Birkenhead, is best known: ‘The world will continue to offer its glittering prizes to those who seek them with a stout heart and a sharp sword.’

I knew from my preparatory reading that the current Warden of the College, Sir Maurice Bowra, was another man well-known for his caustic wit. He was a legendary figure in Oxford circles by the time I met him, although it would be hard to think of anyone who looked less like a distinguished academic and the author of a fascinating miscellany of works on subjects ranging from Greek antiquities to Romantic poetry. Bowra was short and rotund, with a florid face, a double chin or two, and given to wearing waistcoats which made him look like the Mayor of Birmingham.

I understood from my reading that he had a hearing impediment, and it may have been this which accounted for the fact that he didn’t seem to pay much attention to what I said in answer to his occasional questions. He didn’t seem to be particularly interested in the law but otherwise there seemed to be no subject or book unworthy of a quick opinion or at the very least a comment in passing. He had known Ottoline Morrell and Evelyn Waugh. His friends and contemporaries included Isaiah Berlin, A.L Rowse and the historians A.J Taylor and Hugh Trevor-Roper.  Had I read them? I should. One left his residence in a corner of the main quad with a sense of being overwhelmed. 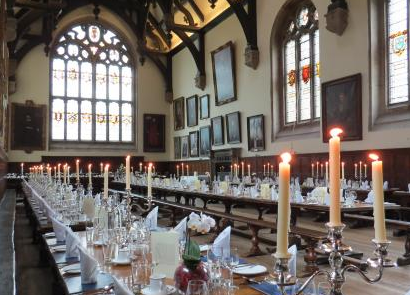 It wasn’t long before I settled in to Wadham College. Life ran on, underpinned by a constant round of essays and tutorials. Meals in the majestic College Hall (right) were spent mostly with post-graduates from the United States or the Commonwealth countries. I spent many hours also in the comparatively new Bodleian Law Library. This was situated some distance away from the town centre and to reach it I passed the walled gardens of Magdalen College within which deer roamed. It was restful to stand and watch these graceful creatures for a while before moving on.

From time to time Sir Maurice Bowra, in order to foster the art of conversation perhaps, hosted dinner parties for students at the Warden’s rooms in his corner of the main quadrangle at Wadham College. I received an invitation in due course and was thrilled to accept.

Since his appointment as Warden towards the end of the 1930s Bowra had become the most notorious Oxford don of his generation, well-known to the governors for the shots he was inclined to fire at the supposedly wishy-washy dons who opposed him. From where he sat, within the walls of his College, he characterised his bolts from the blue as simply a cleansing anti-aircraft barrage against insidious attacks of sentiment and blatant waffle.

The cadence of Bowra’s voice, its sonorous tone imparting a sense of insight and caustic wit to nearly everything he said, was impressive. He addressed those at the table, no matter how junior, as fellow members of a club whose common interest was a devotion to books and current affairs. When he spoke of the novelist Rosamond Lehmann as ‘a meringue-outang with a heart spun out of sugar-ice and marzipan’, he assumed his guests were conversant with the flavour of her works, because they had read them and knew her. He seemed to assume that if someone admitted he wasn’t familiar with the book or issue under notice this must be due to a lack of time, not any want of inclination.

While the port was being passed around, Bowra told the story of a feckless history student who had squandered his time on beer and skittles. Close to examination time, he had boned up furiously on the French Revolution in the desperate hope that the questions would be weighted in that direction. Alas, the questions were all on Bismarck. The ill-prepared student was seen to be writing boldly on his answer paper before striding out of the examination room. It turned out that his paper bore this single, defiant sentence: ‘In Tudor times Queen Elizabeth’s Ministers wanted her to impose tonnage and poundage, but that splendid woman would not yield!’

Bowra told this apocryphal story in his usual swooping and booming tone. The tale came from what seemed to be an inexhaustible hoard. Along the way, he was quick to inform me, as the only Australian at the table, that early in his career at Oxford he was close to the Australian-born Professor of Greek, Gilbert Murray, whose translations of Athenian dramas had inspired a younger generation of scholars, including Bowra himself. Gilbert Murray was said to be the basis for a character in George Bernard Shaw’s play Major Barbara and had once been commissioned by the poet W.B Yeats to provide a translation of Oedipus Rex at a time when the play was banned in Britain. 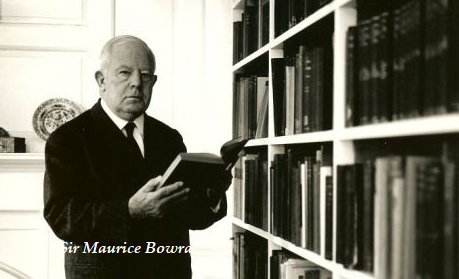 The dinner party and the smorgasbord of stories sustaining Bowra’s world was brought to an end promptly at 10.30pm in accordance with the usual custom. The assumption was that the Warden had an extremely busy day ahead of him, and that his student guests were in the same position. They had books and journals awaiting them, fresh routes and horizons to explore.

Routes to explore? Bowra’s premises were reputed to be one of the routes in and out of the college for those who sought to bypass closure of the front gate at midnight. I knew from gossip in the dining hall that one after hours route inwards to the Wadham precinct was through the grounds of Rhodes House to a high wall at the back of the College. Easier said than done on a dark night. On the one occasion I had to use this route I got to the wall eventually, clambered up, and leapt down, twisting an ankle upon landing. But I was pleased to have found a way in without greater mishap.

According to the same gossip in the dining hall, another route lay through the Warden’s premises. But this was risky too. One night, aghast to find Sir Maurice Bowra was still at his desk in a corner of the sitting room, a student escapee dived behind the nearest sofa. He stayed hidden for over two hours, breathing as quietly as possible. Until Bowra, upon rising from his desk, turned towards the sofa and is reputed to have said: ‘Turn the light out when you go to bed.’ And closed the door behind him.

The Warden of Wadham College is an excerpt from Beyond the Equator: An Australian Memoir by Nicholas Hasluck (Australian Scholarly Publishing/Arcadia, 2019. $34.95.) www.scholarly.info Email: enquiry@scholarly.info

The Moscow Circus Comes to Town!