Revelations of a Hamas insider

Are you looking for a riveting action thriller? A powerful autobiography? An insider’ account of the Middle East conflict? An insight into militant Islam and terrorism? A close-up look at geo-political realities in Israel? A moving testimony of religious conversion?

All this and more is found in the explosive new book, Son of Hamas by Mosab Hassan Yousef (SaltRiver, 2010). 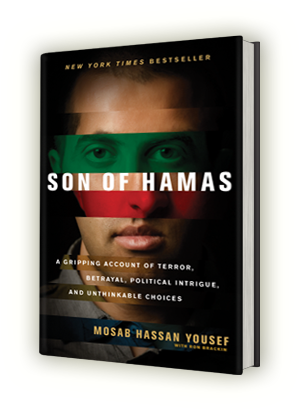 It tells the story of a Hamas insider who was a key player in Palestinian radicalism and Islamic jihad. It also tells the story of how this Muslim ended up working for the Israeli secret service. And it tells how in a land of bloodshed, revenge and hatred, one man found that Christianity is the true answer to such problems.

Mosab Hassan Yousef was the son of Sheikh Hassan Yousef, one of the seven founding fathers of the international terrorist organisation, Hamas. Although his father was a moderate who personally did not use violence, he came to see killing, bloodshed and suicide bombings as a way to free the Palestinians and get back at the hated Israelis.

His son followed in his father’s footsteps, and he found himself, while still a teenager, purchasing weapons so that he could kill Israelis as he worked on behalf of fellow Palestinians. He was caught by the Israelis and imprisoned, enduring horrible conditions.

But through a series of remarkable events, he found himself working for Shin Bet, the intelligence service in Israel. He at first agreed, thinking he would become a double agent, and turn on the despised Jews. But after getting to know his Israeli captors better, and after experiencing just as bad abuse, torture and hatred from fellow Palestinians, he ended up a committed collaborator with Israel.

As a result he helped to save the lives of hundreds of innocent people who would otherwise have been the victims of Hamas and other terror groups in Palestine. He also helped to see the capture or killing of numerous militants and terrorists.

But the further he became involved in all the political intrigue, bloodletting and the never-ending cycle of violence, the more he came to see that real peace in the Middle East would not come from any of the sides or factions involved.

He began to attend Christian Bible studies, and was given a New Testament for the first time. Over a lengthy process of some six years, he came to realise that Islam was not the answer, and that the only true source of hope and peace was the life and teachings of Jesus. He came to see that the man who said, ‘love your enemies and pray for your persecutors’ was the one with the only real key to defusing the Middle East powder keg.

Son of Hamas works on a number of levels. It is of course the amazing story of one very courageous young man who now resides in the US for his own safety. It is also an insider’s account of the workings and machinations of not only Hamas, but all the other key militant players in the Middle East conflict, including people like Saddam and Arafat.

It reveals all sorts of facts and truths that so often have been ignored or distorted by the mainstream media. It tells us what the real story is all about in this greatly troubled land, and how so many activists claiming to have the well-being of the Palestinians in mind had nothing of the sort.

For example, many of the militants thrived on bloodshed and victimisation. They were quite happy to see innocent women and children killed, simply so they could consolidate their own power, their own wealth, and their own glory.

If people had doubts about Arafat before reading this account, for example, there should be no doubts afterwards. He really did not care at all about the plight of the poor and marginalised Palestinians. He was simply concerned with amassing his own personal fortune, and getting attention and fame from the world’s press.

For example, during the July 2000 Camp David Summit Arafat was offered tremendous concessions from the Israelis. Yet he rejected all of it. Says Yousef, “For Arafat, there always seemed to be more to gain if Palestinians were bleeding. Another intifada would surely get the blood flowing and the Western news cameras rolling once again.”

But more remarkable than this first-hand account of the real motives and dealings of the militant groups is the story of his own conversion. From an angry young man who was the heir-apparent to the crucial work of his father, to his efforts to save innocent lives of Israelis and others, to his own encounter with the true man of peace, Jesus Christ – his was an incredible journey.

Yousef informs us that true peace in the world can never be achieved until we first experience true peace in our own hearts. And only a personal encounter with the risen Christ can achieve such an outcome. This story provides a sterling example of this, and it offers us all genuine hope in the most hopeless of times.

PETA and Further Scenes from the Passing Madness