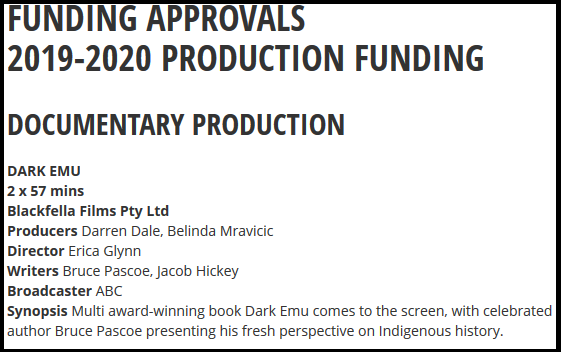 It seems the issue of Bruce Pascoe’s aboriginality is not quite so settled as we might have thought a week or so ago.  It is unclear if he is the target of a recent call by activists Stephen Hagan and Ann Weldon for more stringent scrutiny of claims of aboriginality, but given the level of support he has among influential figures of the Left, both Aboriginal and non-Aboriginal, I think he is unlikely to be held to account. There is little chance, in other words, of the ABC/Screen Australia’s  two-hour twin-episode adaption of Dark Emu being dropped.

That Pascoe continues to benefit from his notional Aboriginal heritage  owes much to Indigenous activist Professor Marcia Langton, who is heavily invested in Dark Emu, having declared it “the most important book in Australia which should be read by everyone”.  She has also stated that Pascoe’s “sources are correct”.  In a recent article in Quadrant Online, I provided two examples were this claim is quite clearly false.  I also provided another example of what Russell Marks has described as Pascoe’s  ‘embellishment and exaggeration’.  I reproduce that example here.

Page 98 of Dark Emu describes an encounter by Charles Sturt with a large number of natives who showed him some hospitality.  The section of interest is a footnote to the description of that incident:

The analytical skills of his recruits must be quite exceptional for them to be able to pinpoint Sturt’s location to within a minute of latitude and longitude. Unfortunately, their confidence regarding the location of this incident is quite misplaced, since a latitude of 127 degrees south would put Sturt considerably south of the South Pole, if that were possible.  Obviously a typo – and we can excuse that – but not, I think, the deliberate deception that Pascoe is perpetrating here, since, on 2nd November, Sturt, himself, notes ‘Our latitude here, by an altitude of Jupiter, was 27 degrees 47 minutes S.; our longitude by account 141 degrees 51 minutes E’.  His journal also records that the incident took place on the 3-4 November, as anyone who had actually read the journals would know. These details can be verified on pages 70 and 71 of Sturt’s Narrative of an Expedition into Central Australia.  Put another way, there is no way that Pascoe’s researchers could not have stumbled upon the fact that Sturt had done their work for them.

Why Pascoe would include this deception eludes me since it adds nothing to his essential premise. The significance of this example, and the reason I included it here, is that it shows that Pascoe will lie even when he doesn’t have to, just for the hell of it.  And advocates like Marcia Langton swallow it hook line and sinker.  Or do they?

Judging by her recent form, Langton, for one, is quite as deft as Pascoe at dissembling, albeit somewhat more subtly. Below, from a recent edition of The Australian, Langton holds forth on the topic of the High Court’s recent decision bestowing a special status on ‘indigenous’ people:

Moreover, the great fear of many Aboriginal people who directly bear the burden of our terrible history is the recent proposal to Home affairs Minister Peter Dutton for a registry.  This would be the worst instance of racial profiling and establish the bounds for a race-based purge of Aboriginal people.

Now pay attention to her choice of words. Langton makes a point to note the proposal was made to Peter Dutton – convenient bete noire of the Left – but neglects to say by whom the proposal was made – surely a pertinent detail. Anyone not been following the Pascoe saga would not know that the proposal was made by Aboriginal activist Josephine Cashman, which puts a rather different complexion on the matter.  As far as I am aware, Dutton has made no comment whatsoever on this proposal but Langton’s clear intention is imply that he is in collusion with ‘racist’ elements within the body politic.

And, by the way, it is hard to imagine how any form of Aboriginal sovereignty or a ‘Voice to Parliament’, both of which which Langton supports, could be sustained without some form of register to establish just who amongst modern Australians qualifies as indigenous and is thus allowed to vote. Is one great-grandparent enough? Does a big, bushy elder-style beard, a la Pascoe, get you over the racial line?

Then there is Langton’s vague — no, let us not mince words — her inane suggestion that such a register could be used to ‘purge’ Aboriginal people. Whatever does that mean?  From what does she imagine they will be purged and by whom?

I suspect Langton is well aware that Dark Emu is a farrago of lies, half-truths and misrepresentations but it suits her political purposes to have a text in our schools that exults Aboriginal achievement beyond reality but, more importantly, fosters a sense of guilt among susceptible white readers and an enhanced sense of grievance among suggestible Aboriginals. Dark Emu does all of that on the trot.

Dark Emu is propaganda.  It is not history and should not be allowed anywhere near our schools in that or any other guise.

A Statement from the Heart of Passivity