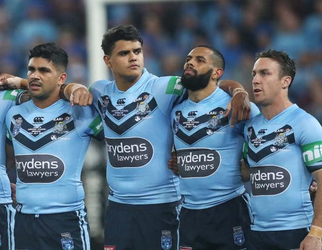 In 2008, Prime Minister Kevin Rudd issued a “national apology” for the mistreatment of Australia’s indigenous people. Since then, evidence abounds that race relations, far from improving, have grown worse, with one infamous incident seeing an Aboriginal activist cheered when expressing her wish that “Australia be burned to the ground”. The latest despicable display of racial bitterness was NRL star Cody Walker’s unoriginal refusal to sing the national anthem before last night’s State of Origin opener. You would never have guessed that he announced his intention not to sing in the middle of National Reconciliation Week. Perhaps they should re-name it ‘racist virtue-signalling week’.

What the people complaining loudest about ‘white racism’ are actually demanding is obeisance. This week will potentially only serve to deepen resentment and widen divisions between Aussies who really don’t see any differences between us and those with varying fractions of indigenous blood who may or may not hold everyone else guilty for historical wrongs. Fortunately, most non-Aboriginal Australians are sensible enough to overlook these childish fits of racist petulance.

Merriam-Webster defines reconciliation as ‘restoring friendship or harmony’. Reconciliation has never been further from the national grasp than it is now, but there are profound changes that must happen and obstacles which must be removed before it ever can happen.

I can’t tell whether it’s the majority or minority of Australians with indigenous heritage, but I do know far too many are clinging to victimhood in a way that makes reconciliation a buzz word, not an achievable goal. Just this morning, on one of the breakfast news shows, an Aboriginal elder nonchalantly mentioned there can “never be forgiveness”. Try reconciling with that attitude.

Nelson Mandela said a refusal to forgive “is like drinking poison and waiting for the other person to die.” There can be no moving forward while so many are hopelessly mired in the past. There can be no honest friendship with those who insist on reminding you of what people you don’t know did to other people you never met and holding you responsible for it.

No substitute for personal responsibility

The standard rejection of this sage wisdom by bitter blacktivists cites ongoing “injustices” as justification for constantly picking scabs. But that’s the problem: there will always be immature jerks of deficient character to legitimise the grievance industry. At some stage you’re going to have to put down the poison and stop waiting for the other person to die.

The only person you can control is you. The only attitude you can adjust is yours. Placing all your hopes for reconciliation in behaviours desired of other people is to abdicate your own responsibility and transfer all your power to those people.

There’s no such thing as ‘your truth’

One thing many are calling for in this year’s virtue signalling week is a foundation of truth. The obese elephant in the room though is the omnipresent imposition of a single perspective being offered as objective truth. The implication is that if you dissent from the status quo, you are the problem, and you must be re-educated to understand concepts such as ‘white guilt’, ‘white privilege’, and that all purpose cliche ‘pervasive, systemic racism’. Consequently, the logic goes, you must agree to whatever reparations, no matter how unreasonable, are demanded by the grievance industry. Never mind that frequent inter-tribe invasions, massacres and violence against women were at least as common in pre-white Australia as in the rest of world history. When whites do it, however, it’s unforgivable.

Any race-based solution is racism with lipstick

An objective truth undergirding Western common law is Imago Dei, a Latin phrase meaning every human being is made in the image of God and, as such, is of equal value before Him and before the law. That’s why slavery is wrong, the Holocaust was wrong, segregation and abortion are wrong – all devalue entire classes of humans. That’s why suffrage is right, as are equal-pay laws. There is no natural difference between any two persons’ inherent value, regardless of age, gender, religion or race.

To suggest then that our Constitution should honour one specific ethnic group and no other is to divide Australians by race, something we’ve rightly striven over time to erase. To suggest there should be extra recognition in our parliaments for certain voices, solely because of their race and to the permanent exclusion of all others, is to violate the sacred democratic value of one man/one vote.

There are some people who simply want no part of this nation; they have no affection for Australia in their hearts. They loudly decry the evils of the continent’s settlement by ignorantly branding it an invasion. Some athletes, revelling in the platforms and privileges which go with the elite levels they’ve achieved, even refuse to sing the National Anthem, bitterly claiming it doesn’t represent their “family”.

How are we meant to be reconciled to people who take great pride in utterly rejecting having anything to do with the rest of us? We have a flag that represents an invitation to everyone who wants to be included and which excludes no one. We have an Anthem that rejoices in equal opportunity for all. We have a government that grants every adult equal voice regardless of their identity.

There can never be reconciliation until the voices of mature Australians drown out those who prefer to exploit and prolong division. Maturity requires forgiveness instead of resentment, moving forward without demanding certain conditions from others, accepting that we’re going to have divergent opinions about who done what when, relinquishing a subjective notion of reparative ‘justice’, and happily choosing to be one of us: a functional Australian without a racially-weighted chip on the shoulder.

Whatever its stated intentions, National Reconciliation Week has evoled to target only one side of the racial divide. It makes demands only of white people, and it holds white people exclusively responsible for the rapprochement such an arrangement makes impossible by definition. As such, it dis-empowers black people, locks them in a prison of paternalism, and tells them they are entirely helpless victims dependent on the good will and character of others.

It’s another example of how the ‘progressive’ road is paved with good intentions yet leads nowhere but to traps and pitfalls.

The Imminent Theft of Ayers Rock

A Playground for Lawyers and Activist Judges