The current Board of the Uluru-Kata Tjuta National Park claim the Ayers Rock climb is “sacred” and should not be accessed by visitors, but in February, 1975, a traditional Anangu elder and senior law man, Toby Naninga, provided a different view in an interview with ABC’s current affairs show This Day Tonight. It seems that, aside from the Men’s Initiation cave, Warayuki, and the Ngaltawata pole, traditional owners at the time had no objection to tourists visiting any other area of ritual significance at Uluru. This includes the climb!

The ABC have not permitted me to show the full video because “the traditional custodians of Uluru have advised that this footage is not suitable for posting on social media”. When asked why, the ABC replied: “There are several reasons for this recommendation – such as aerial views of Uluru and the specific sites included in the footage.”

However, as this footage is highly newsworthy, providing an important insight into Anangu attitudes to tourist access around Uluru and contradicting, in words straight from the mouth of a respected Anangu elder, the position of the current Park Board it is a matter of considerable news value and public interest, I have provided a copy of the relevant part of the TDT segment under the “fair dealing” provisions of the Copyright Act.

The edited segment does not include any views of Warayuki, and the Ngaltawata pole, nor are there aerial shots that feature early in the segment and show the northern face of Uluru. This is visible to tourists and locals and appears extensively in publicly available material, both online and in books. The video includes brief views of the entrance to Mutitjulu Gorge. These views are also available to the public via stories sanctioned by Parks Australia. How the footage came to light is explained below.

Let me begin in 1975 — February 13, to be precise — when ABC’s TDT broadcast a report by Grahame Wilson about the (minor) environmental impact of tourists at Ayers Rock and changes being proposed for accommodation by the Northern Territory Reserves Board. The daggy hotels and unsightly camp grounds would be moved outside the park to a new resort complex to be constructed 10 miles away (now Yulara). The report also covered the construction of a new fence to guide tourists out of the men’s initiation cave, Warayuki, and away from the adjacent Ngaltawata area (commonly referred to at the time as the Kangaroo Tail). 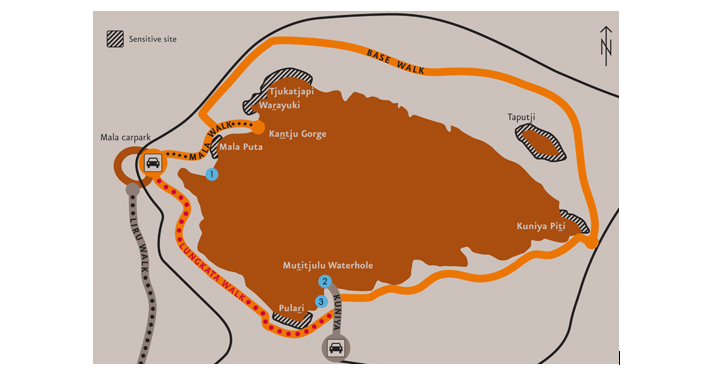 Wilson interviewed Yankunytjatjara elder and brother of Paddy Uluru, Toby Naninga (below right). The transcript of that explosive 1 minute 48 second section appears below and totally busts the myths promulgated by Parks Australia and the current UKNP Board that traditional owners have issues with tourists visiting areas of ritual significance. While Toby was happy to see the end of tourists wandering through Warayuki, he had no objections to them visiting other areas of ritual significance.

As it was important that Toby be able to speak for himself, I have included the video clip so viewers can make up their own minds about who is telling the truth, Toby or the present day’s board. The text below is a transcript of the clip’s relevant section. 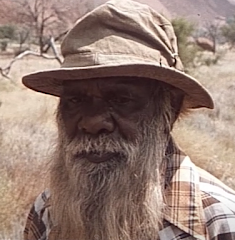 Lead-in footage of men for fence posts (pictured above).

Grahame Wilson (GW): Fences are not a usual feature of a wilderness area of a National Park, but this fence is one sign of the new attitude to the real priorities around the landmark. The Yankunytjatjara people were remarkably tolerant of tourist intrusion into traditional areas. But they made one definite statement: No tourists at Warayuki the initiation cave or the sacred site Ngaltawata nearly.

Cut to Grahame and Toby Naninga standing on road next to fence, Ayers Rock in background.

GW: …tell me what is this place here?

GW: You don’t want tourists to go in there?

Cut back to Grahame and Toby looking at the Rock

GW: Toby Naninga is the brother of the traditional keeper of the Rock (Paddy Uluru). This week he and two other members of the family will join the staff of the Northern Territory Reserves Board as park rangers watching over their people’s territory. Tourists will no longer visit the initiation cave, still of great importance to the living Yankunytjatjara culture. But there’s no objection to tourists visiting other areas of ritual significance. Perhaps because vandalism has never been a serious problem here.

GW: This is a very important place to you?

GW: Do you mind tourists going anywhere else?

GW: Anywhere else is alright?

GW: But not here?

The myth that the climb is especially sacred and, therfore, must be forbidden to tourists is completely busted! Once again, attitudes of past elders are in stark contrast with that of the current board. Past traditional owners had no objections to tourists climbing the Rock and visiting and viewing areas 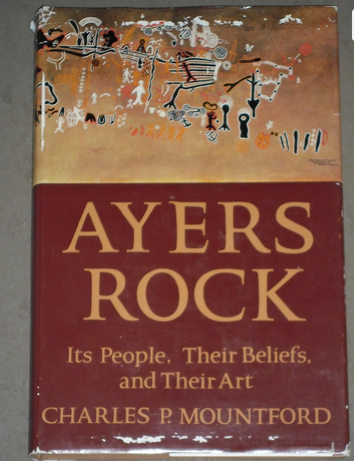 of ritual significance outside of Warayuki and Ngaltawata. We are are assured that Tjukurpa, the local Aboriginal religion, is timeless and unchanging. If so, the current board is effectively disrespecting the views of past elders, including Toby, Paddy Uluru and Tiger Tjalkalyirri, who appear to have been more in touch with the land and the “law” than the current board. The current board has argued that Anangu have been misrepresented in the past about the climb. This is another slight on past elders, for Paddy Uluru, Toby Naninga and Tiger Tjalkalyirri do not seem men who could be intimidated on matters of importance.

In regard to access to sacred sites around the park. There is no reason public access to Warayuki, Ngaltawata and a host of other sites, roped off to exclude actual entry, should not be possible when they are not in use for ceremonial purposes. Other religions are more than happy to permit public access to view and photograph especially sacred parts of their places of worship, closing them off when they are in ceremonial use. Many Quadrant Online readers, for example, will have climbed the dome of St Peter’s in Rome.

The Anangu Religion and its sacred stories and sites are part of humanity’s collective cultural history and it is selfish to keep them from others, especially when interpretations and images are easily available through public libraries and the internet. See, for example, Charles Mountford‘s 1965 book Ayers Rock: Its people, their beliefs, and their art.

Notes on obtaining the footage

On finding mention in the National Archives of the This Day Tonight item  (item 13238462) I was interested to see what it contained. I paid the ABC Library $88 for a private copy of the segment (inc GST), negotiated down from the usual price of $165.00. After identifying the newsworthiness of the footage and its importance to the debate about the proposed ban on the climb and  general access to and around the Rock, I requested a copy to place on social media as a news item. The ABC initially quoted me $500 for a one-year licence:

Hello Mark
If you wish to post this online to a public website or social media site we would have to check if we have world rights to this footage. Considering the subject I would think this would be unlikely. There is also a licence fee if you wish to upload it – which would be a minimum Of $500 for 1 year. I will wait to hear from you.

This later figure of $500 soon changed to $800.00 for a 12-month license. That sudden and dramatic change in price not explained:

The baseline fee for uploading segments to public website/social media for one year is AU$800. We are a self-funded part of the ABC and This covers our internal costs of producing the segment and rights fees in distributing this online. As you are uploading to a website you are re-publishing this globally. We would Also need to seek permission from the Uluru park authority to check if the segment is appropriate for world distribution – there may well be Aspects that are culturally sensitive and may not be suitable for public viewing. The fee you have paid covers a non-theatric copy for private viewing only.

The ABC had already provided a copy for private viewing for $88 (inc GST). How did the same copy suddenly cost $800 when all that “hard keyboard work” of retrieving a digital file had already been done? The cost to retrieve an item already available digitally in ABC’s library appears somewhat excessive to say the least.

As indicated above, the ABC would not provide permission to use the whole piece, but under fair dealing provisions of the Copyright Act that provide for use of material without permission to report news, and the fact that the footage does not show special sites local owners were concerned about, we have made the relevant part of the segment available for its newsworthiness. There are images of the entrance to Mutitjulu Gorge, but these also feature in material made public by Parks Australia and the board.

In regard to use of material in this way the Australian Copyright Council advise:

Copyright material may be used in reporting news in a newspaper, magazine (similar periodical), in a film, or by means of a broadcast, provided the use is “fair”. The author and title of the work must be acknowledged. However, music in news reports is not covered by this provision, unless the playing of the music is part of the news being reported. The use of music and sound recordings in this context is usually covered by broadcasters’ licences from the Australasian Performing Right Association and the Phonographic Performance Company of Australia. For further information on these licences, see our information sheet Copyright Collecting Societies.

The Federal Court has held that for the purpose of “news”, old material or footage may be relevant to current news events and falls under the fair dealing provision. Alternatively, under this same provision, journalists may use copyright material they have discovered relating to past events.

It is important also to note that taxpayers have already paid for this footage and that it has already been broadcast. The public should not have to pay for it again. The ABC’s extensive news archive should be made available free of charge to the general public, perhaps by transferring ownership to the National Library.

As to the supposed “special significance” of the footage, what Australians were able to view in the 1970s they also should be free to view today. This move to erase an inconvenient past must cease if we are to take our right to freedom of information and expression seriously.

Marc Hendrickx has a blog, The Right to Climb Ayers Rock.  His book A Guide to Climbing Ayers Rock can be pre-ordered from Connor Court via this link

Is Australia Really a Racist Country?