There are common threads running through all fundamentalist movements, as Karen Armstrong explains in her 2001 book Islam. While her comparison refers largely to religious faiths rather than ethnic ‘tribes’, there are lessons for traditional Aboriginal culturists.

Fundamentalists display a serious antagonism toward modernity, with which they’re disappointed. This is based on modernity’s failure to produce what it promised; therefore, because modernity is failing, traditionalism should be preferred. Fundamentalists also display fear of being extinguished as upholders of cultural tradition and faith. This has particularly been the case when aggressive Christianity has subdued Islam, but has also been the fate of many traditional societies, often Indigenous tribal cultures invaded by moderns.

Almost invariably, where modernity, often as secular democracy, has been established, there has been what Armstrong terms a parallel “conscious reaction”. Aboriginal culturists have reacted, as have many dominated minorities, by “overstressing those elements of their tradition” that are in conflict with modernity. In this way the perceived shortcomings of both democracy and secularism are devalued by fundamentalists stressing the wisdom of elders and the essential role of spiritualism in their identity politics. By highlighting the darker side of modernity, the strengths of fundamentalism are offered as the forward path.

The liberal thinking of the moderns often has been interpreted as an assault on faith, culture and identity. As a result, a fundamentalist’s reaction often has been extreme, as happened after the well-known Scopes court case in Tennessee in 1925, when Christian fundamentalists attempted to stop evolution being taught in schools. In that case the modern press so humiliated the fundamentalists that they became even more extreme in their literal reading of the Bible. 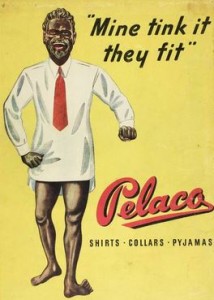 In the Australian context, it is worth analysing the extent to which earlier denigration of Aboriginal culture — observe the Pelaco advertisement from another time — tradition and behavior led in time to an increasingly defensive over-emphasis of the values pertaining to their ancient culture. In the process, the virtues of Indigenous mothering, family cohesion, sustainable land use, respect for nature, true environmentalism, caring and sharing were repeatedly offered as solutions to modern dysfunction, corruption, mental illness and materialism in today’s consumer society.

It is unusual for fundamentalism to be viewed in anything but a religious light; however, Armstrong’s rather basic analysis suggests that the Aboriginal modern/traditional debate has much in common with the age-old Arab/Jew/Christian fractures in the Middle East:

Fundamentalism therefore reveals a fissure in society, which is polarised between those who enjoy secular (modern) culture and those who regard it with dread. As time passes, the two camps become increasingly unable to understand one another. Fundamentalism thus begins as an internal dispute with liberalisers or secularists within one’s own culture or nation.

This seems to be precisely what is happening within the Aboriginal First Peoples. In this context the internal schisms become more bitter than those with the previous external enemy. ‘Ultra Orthodox’ is a label usually reserved for Jews, but there is an increasingly loud call that demands respect for an Aboriginal equivalent. The replacement of Moses, Abraham and Jesus by Dreamtime spirits and totems is easily accomplished through the invocation of songlines, which are considerably more ancient than the Exodus to the Holy Land of Canaan and, apparently, equally believed by adherents.

In an era when secular modernity has pushed faith to the sidelines of society, fundamentalists have managed to bring faith back to centre stage. Just as Islam has been able to re-establish its place in United Nations deliberations, so Australia’s First People have created a place for themselves in the UN Human Rights Commission’s debate on cultural recognition. Just as fundamentalism has always used religion to further its political ends, the Dreamtime story  of creation, with all its powerful human/animal/land inter-relations and obligations, has been developed into a strong, albeit belated, demand for recognition and respect. This spiritual fight for survival includes unstated fear which transforms toleration and empathy into an exclusive aggression hat sees moderates lose their nuanced stance at the interface of cultures.

The parallels between Aboriginality and Islam are fascinating, complex and not amenable to rational logic. Bearing in mind that Islam was developed several centuries after Christianity and includes many Old Testament beliefs, the Arabic language and identity reflected in the Koran, rather than theologicy, offered persuasive drivers for the creation of the then-new religion.

In a similar vein, the political emergence of Australia’s First People, while appreciating modern education and health care, understandably feel a need for “our own” cultural, political structures and procedures. Fundamentalist Muslims and Aborigines may both value modernity’s physical well-being, but each regards Western society as having ‘No light, no heart and no spirituality’. They thus feel strongly about the need for a resurgence of their own values – those values which give a sense of belonging which the West seems unable to provide.

The internal divisions among Islamic Sunnis and Shias are purely political, rooted in the ancient belief in direct heredity from Mohammed. The divisions within Aboriginal modernists and traditionalists are also political rather than philosophical, but are more personality-defined than credo-based. The belief that humans need spirituality is fundamental to the present Aboriginal divisiveness, as is the assumption that integration with the mainstream obliterates cultural identity. Aboriginal traditionalists are not alone in their conviction that man cannot live by bread alone.

In modern Australia, it is probably the feeling of discrimination, injustice and second-class citizenship which drives the Aboriginal separatists, rather than a genuine spiritual need to return to ancestral country and beliefs. At a personal level, each individual responds according to his or her self-confidence and feeling of competitiveness. As a result, willingness to join the mainstream may be seen as the avoidance of civil responsibilities, rather than the honouring of ancestral obligations.

Much of the Land Rights and Native Title struggle has centered on a concept foreign to modern capitalism, i.e. obligation to country. This ancient commitment to ‘holy land’ mirrors Israel’s uncompromising commitment to all that tribal homeland stands for. Whether such land was Terra Nullius when Moses, Abraham and David claimed it remains central to the centuries-old claims. While there are similarities with the Jews’ land claims, the Aboriginal land claims are both more ancient and more rooted in the man/land co-genesis. While the Creator as God or Rainbow Serpent is a human construction, the traditional respect for land as an integral part of the Aboriginal psyche, sets them apart. Not that the idea of ‘nurturing terrains’ is foreign to modern societies – witness the growth of the conservation lobby in the West.

The crucial discussion for future Aboriginal societies is whether there is any viable alternative to a productive work ethic as a survival mechanism. Equity, justice and freedom remain central to future societies, but without a responsible and productive foundation these eternal virtues must remain elusive.

A Playground for Lawyers and Activist Judges