Preface to the 2012 edition by Gary Johns

Geoffrey Partington’s monograph Hasluck versus Coombs was first published in 1996 and is now out of print. The Bennelong Society and Quadrant Online are delighted to make it available in an electronic edition.

Geoffrey Partington’s study of the two dominant themes in Aboriginal policy—assimilation and separation—and their best known advocates—Paul Hasluck and ‘Nugget’ Coombs—is, therefore, vital reading for those with an interest in Aboriginal people and policy. 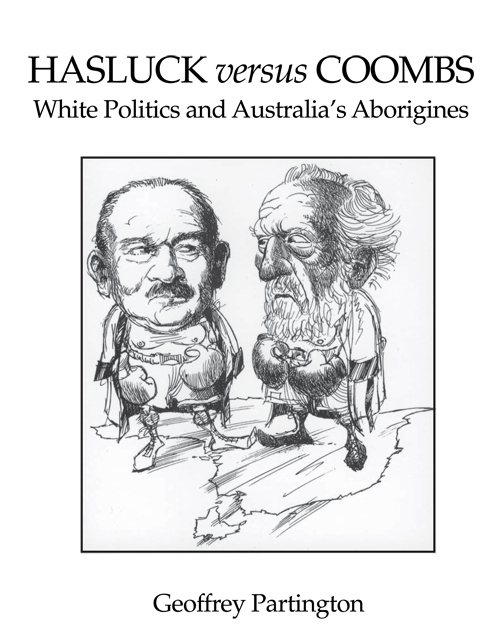 Hasluck’s approach meant that,for the future there must be opportunity and encouragement for the coming generations of aboriginal people to become like all other Australians.

By contrast, Coombs’ approach reflected the new post-sixties radicalism [which] found unexpected virtues in traditional Aboriginal cultures and sought their preservation rather than their transcendence.

A great deal has happened in the decade since the book was published. Many academic careers have been built on championing the cause of separation. Many Aboriginal leaders have grown powerful and wealthy because of their ‘assimilated’ education and their involvement in a ‘separate’ politics. Fortunately, there are limits to the extent to which others involved in Aboriginal policy can suspend reality.

Once more, Aboriginal policy has started to lean toward the assimilationist path. The path is not, however, like that which characterised earlier phases. Australia is more diverse, so that there is no single identity with which to assimilate. Aborigines have achieved equal legal rights, secured the protection of anti-discrimination legislation and benefited from a myriad of programmes to make good their legal equality. Following 30 years of the struggle for land rights, many also possess land. Aborigines have new powers and possessions.

The path toward assimilation, or more accurately, integration, is unmistakable. It is driven by two factors—intermarriage, and the triumph of economics over politics. First, nearly 70 per cent of Aborigines marry into the dominant society. Aborigines are choosing to integrate. Second, no amount of political organisation for the defence of culture and rights can overcome a deficit of the skills required to generate wealth.

Too much of Aboriginal policy has been dominated by politics and power, the pinnacle of which was the establishment of ATSIC. Its demise—superficially because of the appalling behaviour of some of the Commissioners, but fundamentally because its purpose was to disburse public funds as political favours—has left the door ajar for the demobilisation of Aboriginal political associations across the board. Land councils and service associations, which serve the same purpose as ATSIC, have proved the downfall of ‘organised’ Aboriginal society. There is an alternative Aboriginal society. It consists of autonomous individuals, their families and any of their associations and networks, operating, not as a siphon for public funds or as a compulsory forum for communal decision-making, but as an expression of unencumbered individual and collective action.

Where Aborigines have been ‘ghettoised’—whether in Redfern NSW, Aurukun Queensland, or Punmu Western Australia—the result has been the same: appalling physical and moral degradation, and entrapment in a culture of despair. The path out of the ghetto lies in changing the behaviour of individuals, not the dominant society.

The question for policy-makers is where and how to assist the process of escape, and, of course, this will take a great deal of assistance from the dominant society. In some cases, the ‘escape’ may be in situ. People may find a life that is satisfactory where they live. Others, especially those in remote locations where the prospects for employment in the real economy are poor, will have to leave, or remain poor. The difficulty in such a strategy is the enormous strength in the attachment of individuals to the clan. As one tries to move on to make a better life, others pull the individual back, demanding an excessive share of the spoils. Overcoming the culture of clan and family obligation is an intimate part of integration. Lauding interpersonal obligation as somehow culturally sacred is no different to lauding the culture of poverty which, in the 1960s, the Left denounced, but decades later conceded is a principal cause of intergenerational poverty. Welfare payments have intensified the insularity of Aborigines.

Moving to taxpayer ‘mutual obligations’ as a tool to provide an incentive to change behaviour is a worthy beginning. The challenge is to reintegrate or integrate Aborigines into the economy through real jobs. Those who perform intellectual gymnastics by arguing that there is an ‘indigenous economy’, consisting of a mixture of welfare support, mining royalties, community volunteer work and the occasional entry into the labour market, are the enemy of Aboriginal progress. There is no moral basis upon which one group of people should have a different contract with the taxpayer. The receipt of taxpayer funds comes with an obligation to try. Moreover, while taxpayers’ funds can be used for a time to keep a group in a separate existence, the laws of economics cannot be suspended indefinitely, or at least not without damaging those caught in the hiatus.

More difficult is to take a strategic view of the future of Aboriginal policy. Where is the next dollar to be invested? Too often, all problems are given equal weight—health, housing, law and order, schooling—as if each is an effective tool for change. For example, the Australian Medical Association regularly demands further health funding so that further interventions may be made into the lives of Aborigines whose behaviour destroys their own health. Housing associations and advocates demand more funds for houses, especially in remote locations, because previous houses have been destroyed. And educators demand more schools in remote locations, when such schools are poorly attended. These and many more demands are made without properly considering whether they will overcome the underlying problems in the communities in question.

Although governments will spend no less on Aborigines, they must think seriously about how best to spend what they have. A recurring amount to each programme is a waste, and ‘evening up’ provisions and infrastructure to communities of equal population is wasteful and misguided. If the aim of policy is to give Aborigines the means to integrate into the dominant society, it will take positive (funding) and negative (de-funding) incentives to achieve it. Barriers to change—cultural insularity—will have to be dismantled, and gates of opportunity—training and education—will have to be opened. The one has to re-inforce the other. Schooling in a remote location, where the local culture is strong and negative will have little positive impact on the lives of the children. Each small remote Aboriginal settlement cannot be serviced indefinitely if it is the cause of the next generation of despair. To do so is a weak response to need. It is a typically programmatic response of governments to throw in resources across the board in order to avoid real decisions.

Those Aborigines who have been integrated are healthier and wealthier than those left behind by the experiment in separatism. Permanent taxpayer funded ‘choice’ is a ruse. Short-term, taxpayer-funded choice as a means to change, on the other hand, is an acceptable investment.

Geoffrey Partington’s study has done a great service to the debate on Aboriginal policy. I trust that others will now join in that debate.

Hasluck versus Coombs by Geoffrey Partington is available  here…

A blacked-out past — Part III

The power of victimhood