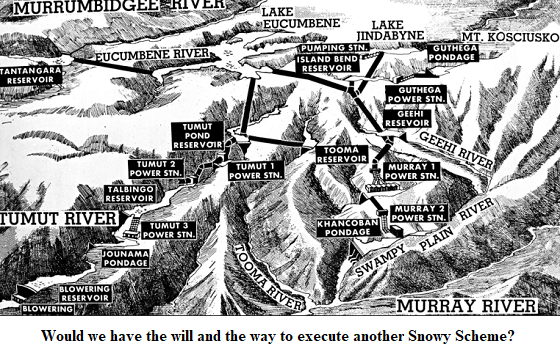 As I watch my Australia transition from a Liberal government which only managed around 36 per cent of the primary vote to a Labor government that received even fewer primary votes, I ponder if Australia has the unity of purpose to have and nurture the vision of a better future. Nearly 70 per cent of voters did not want an Albanese government; indeed, nearly 32 per cent did not want Labor or Liberal. In light of these huge divisions, I question if there is a chance we could regain the egalitarian unity of purpose so evident with our first settlers and after World War Two as we transformed an agrarian British outpost into a multi-ethnic industrial society?

What is the chance of present leaders recognizing that productivity is never an accident? Who grasps that it comes from a commitment to excellence, built on the rock of intelligent and focussed planning? Led by true patriots, a visionary government would take the Australian people on a wonderful journey to a more productive and harmonious future, a future where our children will have  rewarding jobs and appreciate the self-esteem that flows from independent achievement. Present divisions would be overcome by unity of purpose, but this old Bushy is not confident of that outcome.

To achieve unity of purpose we must recognise that the food we eat, the water we drink and the power we use are only there because previous generations invested their belief, money and know-how in the future. Unless this generation quickly does the same, our standard of living will fall.

Our sustenance, our wealth and our future all reside in the land beneath our feet. This wealth belongs to the Australian people and should always be developed and used in the best interests of the Australian people. We need to stop the lazy practice of shipping raw materials overseas, only to buy back much more expensive finished goods. With visionary planning we could produce many of these goods here and ourselves become an exporter of quality finished products.

If we are to do so we must immediately curtail our borrowing binge, as debt can never be the way to genuine prosperity. Present borrowing and the resulting growing debt are a burden on our people and their children that will destroy our standard of living if not reduced. To make matters worse we are spending this borrowed money on lifestyle and circuses and not on the infrastructure needed to provide our future needs of power, water, gas and fuel.

The golden rule to a better future and a country that works for everyone, is that everyone in the country must have work and do so under the same laws. This will never be possible while we are foolishly chasing climate change abatement and enduring impractical regulations and energy policies that are denying access to the tools, and the cheap power, to be competitively productive.

We must stop promoting division and laud our egalitarian culture, beginning with accepting that regardless of ethnic or racial origin or how long our ancestors have lived in this country, every person born in Australia is an equal indigenous citizen of this country with equal rights to share in the opportunities, resources and responsibilities of our land.

Four decades of failure to invest in the infrastructure needed to supply our growing population with basic services like water, power, gas and fuel while unwisely investing our limited capital in the black hole of so-called renewable energy and climate change abatement has left our economy incapable of competing with the rest of the world.

As a steppingstone to a more flexible and entrepreneurial economy we must run a budget in surplus by generating more taxpayers, not by taxing present taxpayers more. To do this every person and every entity must pay some tax, because all entities rely on Government services. Every person and every entity should meet their obligations to our nation by paying tax (no exceptions like charities set up to avoid tax) We must generate more taxpaying jobs and cut back on taxpayer funded jobs. To do this we must truncate the size of Government, reject socialism, totalitarianism and globalisation which are the enemies of the people and their freedom.

Adoption of a visionary plan for future prosperity could make Australia productive, prosperous and proudly independent. I call this a cry for action by “Dinkum Aussies’ to re-establish Australia as a can-do nation; making us a leader in engineering, construction, technology development, manufacturing industry and agriculture.

It is a blunt call to both state and federal governments to stop hindering our productive enterprise and provide the sparks to fire up our potential. Our nation today is a shadow of the can-do egalitarian enthusiasm that started with our settlers and was boldly echoed by visionaries like Ben Chifley and his Minister for Public Works Nelson Lemon when they announced the commencement of the Snowy Scheme. Chifley said on that day: “This is a plan for the Nation and it needs the whole nation to back it”

Where are our present-day visionary patriots like Chifley, Lemon, Bradfield, Playford and many others? We need men and women of vision and political will if we are to be our best.

22 thoughts on “Broad Thoughts on a Better Australia”