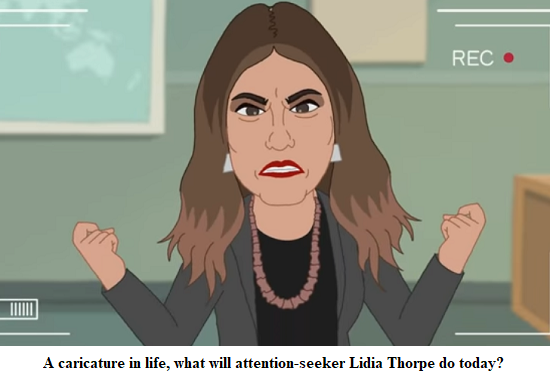 Australia Day is here, so I’m absolutely confident of a few things about to occur: some throat-clearing about changing the date, a good deal of blather about ongoing colonial resistance, and Senator Lidia Thorpe’s utterance of something stupid and contemptible.

To round out this dispiriting list, I’d add the Institute of Public Affairs and their annual survey data on attitudes to January 26 and national pride. Although its spokespersons try to put a cheery spin on things, the trend seems pretty clear: support for Australia Day is diminishing, and this is unlikely to be reversed, given that antipathy to the date and the country itself is much greater among younger cohorts.

There is something else I’ve noticed of late, and it is much harder to measure in data, but certainly easier to feel: there is a new and more intense revulsion towards Australia and its history and it seems to be almost obligatory in certain media and academic circles. This kind of self-hatred is creative, too, and I’m often surprised by the new ways in which people denigrate themselves and their home.

Junkee, a lamentably popular news site for youth, is even embarrassed to call Australia by its name. In an editorial urging its readership to participate in Invasion Day rallies, you can learn that:

The anniversary of January 26 signals the beginning of the invasion, colonisation, slavery, and genocide of so-called Australia.

I hear so-called the most often nowadays, but otherwise named and stolen seem to be the fellow favourites, especially among university professors. Among virtue-signalling woke whites, there is also a new fondness for tagging their locations in their Instagram posts as Naarm or Gadigal, striking a powerful blow, apparently, against the colonies of Melbourne and Sydney.

I rather like the custom of the Acknowledgement of Country, but I certainly don’t like its most recent tweaks and extensions. It is no longer a one-off at the beginning of an event or panel discussion, but a secular and self-flagellating prayer that each panellist is expected to offer up. This is usually done in a creepily competitive spirit, and it usually goes something like this.

The first speaker would like to extend his respect to Aboriginal Elders, past and present and emerging. The second does this, too, but he also wants everyone to know that he knows this land has never been ceded. The third speaker mentions the Elders and the stolen land as well, but she would also like to make it clear that she, as a white settler, participates in a system of racist oppression, but is committed to being a better ally. The second speaker then wishes he had used that line. And so on and on and on.

You may think of all this as harmless stupidity, which is fair enough, at least at first glance. I wonder, though, if this well-meaning but unthinking lot is doing the bidding of those without the soundest of motives. I’ve also noticed that another element of the new revulsion is a more spirited style of activism, led by a few noisy enthusiasts for arson.

I would argue that that the defining Invasion Day moment occurred in 2018, when Tarneen Onus-Williams of the delightfully named Warriors of the Aboriginal Resistance (WAR) took to the stage at a rally outside the Victorian Parliament. There were a fair few expletives flung around, but the memorable moment was when she spluttered: “F**k Australia, hope it burns to the ground.”

When asked to explain my absence from these January 26 get-togethers, I like to cite this incident. WAR — and I wonder how many of the rally attendees know this — is the organising body behind the Invasion Day frivolities, and one can be fairly certain that changing the date isn’t on its list of priorities. After Ms. Williams’ tantrum, WAR took to Facebook to defend her and add a few clarifying remarks, which included the exhortation to “Abolish Australia, not just Australia Day.”

Tarneen Onus-Williams, however, seems rather charming compared to Nayuka Gorrie, another activist and a contributor at SBS, where she wrote in 2019:

That article didn’t get much attention, but her appearance in the same year on ABC’s Q&A certainly did. It was in that episode, as readers will recall, that Ms. Gorrie rejected the methods of persuasion and democratic debate as the means of effecting social change. She fantasised about a much more incendiary approach:

I wonder what our kind of tipping point in Australia’s history is going to be when people will start burning stuff. I look forward to it.

And in case viewers still didn’t get the message, she then added:

That brings me back to Senator Thorpe and her impressive talent for bluster (in her Canberra workplace she faces tough competition.) In late December, when a merry band of Aboriginal agitators were next to Old Parliament House when it was set alight, Senator Thorpe took to Twitter to fan the flames:

Seems like the colonial system is burning down. Happy New Year everyone.

I can confidently say that I will never be adequately annoyed by all these people. Every day that Lidia Thorpe spends in the Senate is an embarrassment to our democracy, given that she is a cheerleader for the destruction of that democracy. Every time our national broadcaster showcases fanatics like Nayuka Gorrie I’m reminded that they also carefully ignore the thoughtful and honest insights of intellectuals and leaders like Quadrant contributor Anthony Dillon and Jacinta Price. And every Australia Day thousands of naive young marchers aid the cause of militant activists who hate them and hate the country we all share. Perhaps pointing all this out can dissuade a few from turning up to today’s rallies, but I don’t have quite as much confidence in that.

editor’s note: The Lidia Thorpe caricature atop this post is lifted from Pauline Hanson’s series of YouTube satires, some of which are very amusing

52 thoughts on “Invasion Day and its Ardent Firebugs”