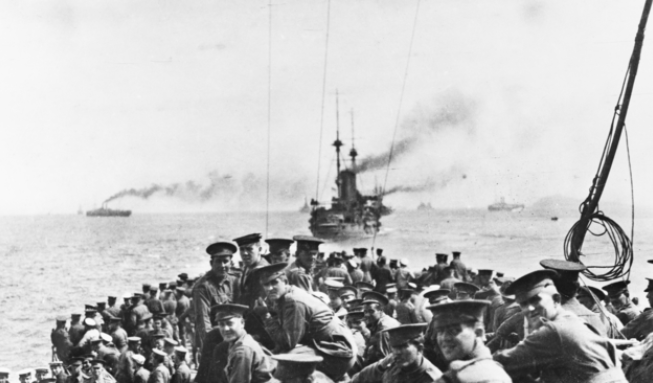 My grandfather, James Robertson, turned 21 on April 25, 1915. That was the day he landed at Anzac, Gallipoli, as member of 8th Battalion, ‘A’ Company. Robertson, a Ballarat boy, survived the entirety of the First World War before returning to Australia in November 1918. He passed away in 1955, before I was born, and so there was no opportunity to speak with him about his Anzac Day experience (or of the time he subsequently spent on the Western Front). Even if I had interviewed him or come across a detailed written description of the Landing from his perspective, the overall story of the day – of his day, let alone everyone else’s, Turk and Allied soldier alike – would have remained something of mystery. That’s the trouble with eyewitness testimonies, and a particularly thorny problem in the case of the Battle of the Landing. James Hurst’s The Landing in the Dawn: Dissecting a Legend – the Landing at Anzac, Gallipoli, 25 April 1915 (2018) goes a long way to explaining why. One of the great virtues of Hurst’s book is that, by critically reviewing a thousand eyewitness accounts and piecing them together like a giant jig-saw puzzle, the author ends up challenging some of the assumptions of traditional narratives. The Landing in the Dawn, then, is the best kind of bottom-up history. 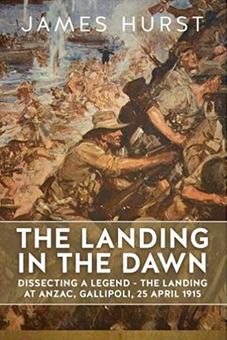 Hurst’s micro-history follows the 11th Western Australian Battalion all the way to Baby 700 and Battleship Hill. The fortunes of the 11th Battalion are a key aspect of Anzac Day because its ultimate task was to occupy the Third Ridge. To have expelled the Ottomans (referred to as the Turks by the Australians) from the heights would have been a military triumph. The Gallipoli Campaign was ours to win from that point. Captain Eric William Tulloch, who was born in Ballarat, like James Robertson, but moved to Perth at an early age, famously advanced to Battleship Hill and, in a sense, opened the door for the Anazacs to wage the Battle of the Third Ridge. But there was, alas, no Battle of the Third Ridge. Instead of risking all to achieve ultimate advantage over the Turks, the Allies consolidated their forces behind the Second Ridge and, as a consequence, relinquished any chance of winning the Gallipoli Campaign. Hurst approvingly quotes from Gavin Souter’s Lion and the Kangaroo (1978): “The day was one of desperate but uncoordinated effort, temporary achievement but ultimate failure.”

The value of Hurst’s methodology is that he uses his vast array of eyewitness accounts to corroborate and/or challenge aspects of the customary narrative, including C.E.W. Bean’s monumental Official History of Australians in the War: The Story of ANZAC (1939), while at the same time deferring to the claims of Bean et al when a soldier’s report was jumbled, unclear and “not necessarily in chronological order”. The classic example of this is Walter William Goodlet’s 19-page record, written on the eve of Anzac Day 1935, of his nightmarish experience on Battleship Hill. Private Goodlet, with his “fingers…burnt and bleeding from rapid and desperate loading and the woodwork of his rifle smoking”, saw off a Turkish attack which, in Goodlet’s words, arrived “like a flood”. And then, in the late afternoon, another Turkish onslaught, according to Goodlet, was thwarted by the shells from the Royal Navy’s Triumph and Queen Elizabeth. Finally, at around 5p.m., Goodlet and the other assorted ANZACs, who were still holding the line, received instructions to withdraw to the Second Ridge. 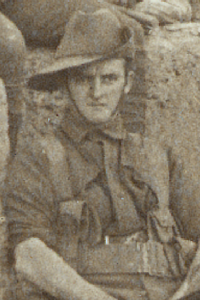 One of the great ironies of all this is that Goodlet (at left), who does not feature in Official History, never knew he had made a gallant stand on a place called Battleship Hill. As Hurst reflects: “As features were not yet named, men did not know where they were. In other words, we generally do not know where men fought, with whom nor when the events they described happened.” To incorporate Goodlet’s 19-page chronicle (and all the other Digger letters, notes, diary entries and so on) into a larger and historically reliable narrative, Hurst had “to begin from scratch” and critically engage with customary assumptions about the original Anzac Day. On some level, at least, The Landing in Dawn exists to make sense of eyewitness accounts such as Goodlet’s. Without Hurst’s ten years of research, and repeatedly retracing the footsteps of Anazacs and Turks, we would not know the story of “Robbo” (Goodlet’s best mate, killed before disembarking) or “Peachy”/P.G. Green (who fought shoulder-to-shoulder with Goodlet). Hurst’s research brings new complexity and new characters into our understanding of the Battle of the Landing, no small feat after a hundred years and a thousand books on the subject. Just as crucially, however, The Landing in the Dawn ends up probing and questioning some of our conventional thinking about Anzac Day. 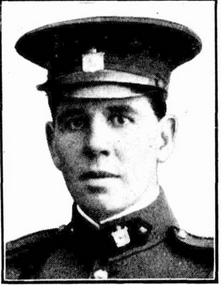 Hurst boldly enters into the debate about the reasons for the “ultimate failure” of the Gallipoli Campaign. But he has earned the right to do so. He traversed every rise and ridge, gorge and gully in the Battle of the Landing, and spent a decade investigating a mountain of secondary and primary sources. His key conclusion is that, in the final analysis, the first speedy counterattack by Lieutenant-Colonel Mehmet Sefik’s 27th Regiment tipped the scales in favour of the Turks, while the arrival on the scene of Lieutenant-Colonel Mustafa Kemal’s 57th Regiment sealed the fate of the Anzacs. Hurst puts special emphasis on the critical role of the 27th Regiment without wanting to diminish the achievement of Mustafa Kemal (later known as the legendary Atatürk) on the day. Nevertheless, The Landing in the Dawn advances the theory that the fabled encounter between Tulloch (at right) and Kemal did not occur. It was the 27th Regiment, rather than the 57th Regiment, that Tulloch and his men confronted on the high ground of Gallipoli.

How much did responsibility for the “ultimate failure” of the Battle of the Landing rest with those in command? In the first instance, members of 11th Battalion found themselves disembarking at the foot of cliffs and under fire from three Turkish platoons, and yet fearlessly scrambled up sharp inclines, sometimes on hands and knees, to clear the beach and head inland. One of Hurst’s key points concerns the fragmentation of the 11th Battalion, in some cases even before a platoon, spread over two separate boats, made it ashore. The darkness, the hostile gunfire, the unfamiliar surroundings, the absence of communication systems, the mystery of their objective, the lack of applicable training, their relative youth (though, Hurst assures us, they weren’t teenagers in the main) and their want of combat experience all coalesced to create a nightmarish scenario. The fragmentation, additionally, meant that the men were often fighting alongside soldiers from a completely different section of the army, had no idea of their actual whereabouts (like Goodlet) and were not under officer supervision. That said, the ANZACs proved themselves lethal warriors, especially in hand-to-hand combat and close-encounter fighting of every kind. They were not lacking battle spirit as they charged ahead in an “uncoordinated effort” to achieve objectives that were not only unknowable, from their point of view, but eventually changed by their superiors. 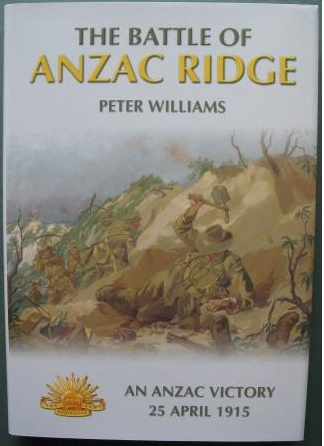 Hurst makes the case, as does Peter Williams in The Battle of Anzac Ridge, 25 April 1915 (2007), that the Ottomans used artillery to great effect in their counter-attack against the ANZACs. Combine this with the fact the Anzacs were without their own land-based artillery and that Sefik and Kemal not only were on home turf but began with the advantage of elevation, and it is possible to believe we never had a chance of taking the Third Ridge (as originally planned) and winning the day. There is the associated view that the consolidation of the Second Ridge, which was achieved at no small cost, was a victory of sorts, securing as it did a foothold on Gallipoli that endured for the remainder of the year, withstanding constant Turkish shelling and, of course, the ferocious May 19 assault that involved some 42,000 Ottoman soldiers, 3,000 of whom were killed and 10,000 wounded. Technically speaking, the Turks never did drive us into the sea, and yet the Anzacs were gone by Christmas that year.

The Landing of the Dawn, to my surprise, leaves open the possibility that genuine victory – that is, capturing the paramount heights – was notionally possible, notwithstanding all the factors mentioned above mitigating against it. For instance, new plans to consolidate behind the Second Ridge were, based on Hurst’s meticulous research and insight, issued before Kemal’s 57th Regiment had entered into the battle. Hurst, who is always fair and generous of spirit, provides good reasons for Brigadier Sinclair-Maclagan taking a cautious position, and yet – as the author implies – if John Monash circa 1917 and 1918 was in command, Gallipoli might have been a very different story. Then again, Gallipoli was a steep learning curve for officers like Monash.

In Hurst’s wonderfully evocative account of the first Anzac Day, the heroic fighting spirit of our grandfathers and great-grandfathers is on full display. The sheer out-of-this-world gutsiness of Goodlet and Green now has a place in our understanding of the day:

I thought that I was firing fast, but Peachy was like a wizard … he shot two bearded giants about paces in front of us and on my side of the bush … coming at us with their bayonets in spite of all I could do.

And their heroism was not in vain, even if reinforcements “like a flood” never arrived to give the Anzacs an authentic historical victory over the Kaiserreich’s partner.  Their pluck bought time for those below them to secure the defences of the Second Ridge. Here is the genesis of the Anzac spirit; Anzac strategic and tactical genius, à la integrated warfare, was still a way off on that first Anzac Day.

The Cry of Crows at Dawn