The Cry of Crows at Dawn

There are those in Altona who will tell you crows are a bloody nuisance. Noisy and smart, they pillage the waste bins in the lane behind the Pier Street eateries that have sprouted in step with the gentrification of what was long a working-class dormitory by the water. The local magpies despise them and the contempt is mutual, each side blitzing the other when opportunity and numbers confer a momentary advantage. This morning, while the maggies remained politely abed, crows of differing species were garrulous with grievance.

It was the crowd without a doubt that set off the avian protest, the throng that assembled and grew through the hour before dawn outside the RSL on Sargood Street, then ambled rather than marched to Civic Parade and the Hobson’s Bay town hall, where a perpetual flame dances in the garden and the wind. They were quiet, taciturn even, right down to small children who might normally be counted on to shriek and dash about and prompt thoughts of modern parenthood’s light touch of supervision. Such noise as there was in the pre-dawn dark amounted to the scuffing shuffle of soft-shod feet, but the crows noticed even that and made their objections known.

Outside the town hall they could observe from their communal roost behind the adjacent bowling club how the Dawn Service crowd was growing. A thousand people – at least that number and probably more – spilling into the carpark that is the crows’ home turf and closest hunting ground. It is where they daily unpack the municipal rubbish bins, litter the ground with drink cans and all the other lunchtime detritus excavated and discarded in the quest for scraps of pie and sandwich crusts. Did they object this morning to the presence of so many at such a strange, unlikely hour!

Crossword aficionados know that an assembly of crows is called a parliament, and it takes no great wit to grasp the metaphor. As the bugler played his tribute to the dead of many wars they caw’d and screamed to shame the most raucous Question Time, tried to drown his notes and almost did, at least a hundred dry-throated critics voicing the discordant racket of their disapproval.

When a groovy vicar intoned his Anzac Prayer their bedlam was near deafening, so much so that it was hard to catch the plea that a hipster Yahweh bless asylum seekers and Aborigines, and further, that He bestow His beneficence upon those who were imprisoned “for protesting war”.  The crowd, unlike the crows, maintained its silence as the po-mo pieties rattled on. If there was a prayer for khaki’d gays, and there may well have been, no human ear would have caught it above the feathered din.

And then the service was over, the Eternal Flame left once more alone to flare above the mound of wreaths left by all who cared to place them, from the local kindergarten’s moppets to the shopping centre traders and the boys from our suburb’s scout troop.

The crows departed too, now that dawn had come and set their day in motion. A black cloud of them rose in a huff, heckling as they departed those who had disturbed their sleep. They decamped first to the roof of the newly built block of “luxury living apartments” overlooking the railway station, from there departing in small squads and larger platoons to go about their daily business. You didn’t need to be a magpie to think ‘good riddance’.

The stroll back to where we began, to homes in most cases or the RSL’s breakfast buffet and neighbourhood coffee shops for others, shed the solemn, instinctive silence of an hour or so before. The ankle-biters gambolled amongst their elders’ legs. A young man paused briefly to de-mute the ring tone on his mobile phone. Two women in the forties giggled when one told the other how much she was looking forward to a feed of bacon and eggs.

At the newsagent’s the piles of newspapers were shrinking. It is nice to have something to read with coffee and toast, although not on this morning The Age, which served as a reminder that crows are far from the only critics of what drew so many at such an hour to gather beneath an umbrella of hush. There would be more naysayers on this day, as always. What look-at-me poseur can resist the opportunity to flash a contemptuous faux empathy, broadcast the signal that their awareness of war’s horrors is more acute, more knowing than that of the jingo’d sheep who rise before dawn to stand in grateful silence. They would infest Twitter, as always, and some perhaps would clip from The Age cartoonist Leunig’s latest bid to be noticed and acclaimed. Just the thing to grace the door of a Northcote refrigerator. Here it is, his annual paint-by-numbers exercise in the predictable — a cartoon approved, if you can believe it, by an individual whose office door bears the title “editor”. 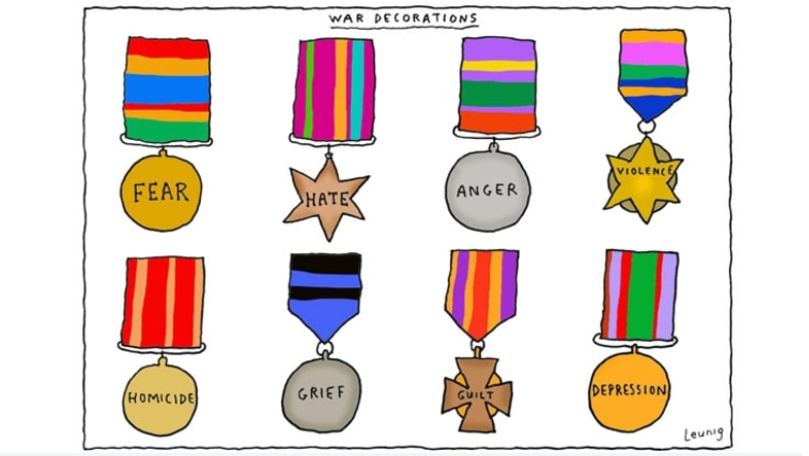 Crows, the feathered kind and otherwise, are with us always. One species’ cries can be endured, as those at the Dawn Service congregation managed to do. And the other? No matter how loudly the screams – and scream today they are and will –  they are best ignored, no matter how hard they posture and parade the hollowness of virtue and souls.