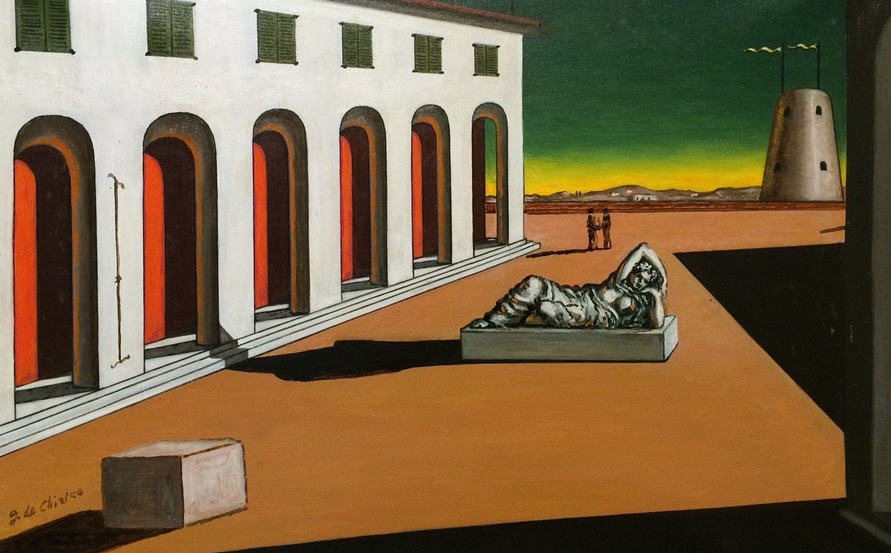 What bizarre days are upon us.  It’s easy in Australia to become fixated with the here and now: the weekly changes in quarantine laws, the daily tally of infected citizens, the obstacles imposed on shopping.  But overshadowing our petty grumbles are worsening events overseas, especially the horror visited upon Italy.

Eighteen months ago I was in Milan over the last weeks of a balmy summer, strolling the cobbled piazza before the squat duomo, animated then by scatters of townspeople, the sky so soaringly high and blue it seemed unnatural, meeting friends at the thronging Galleria Vittorio Emanuele, such hubbub.  That lazy day fixed itself in personal memory, polaroid-like without conscious effort.  Now, photographs in newspapers of those same streets in Italy’s financial capital, emptied of life, bring forth de Chirico’s nightmare cityscapes, and emphasise afresh why his pictures were unsettling when first exhibited.  They are disturbing all over again.

Giorgio de Chirico, a confident 22-year-old not long out of art school, was ill when inspiration alarmingly came upon him.  He was sitting outdoors in autumn 1910, recovering from a gastric bug going around and trying to warm himself in the pale morning sun, when overwhelmed by nausea.  Suddenly he had a frightening hallucination.  The streets as far as he could see and hear were devoid of bustle, of animation, of people, of joy.  Worse still, the city now had a sickly aspect.  This was in the busy centre of Florence, the piazza di Santa Croce, and he was slouched on a bench near the ostentatious 1870s statue of a poet crowned with laurels; but the artist’s mind distorted everything in sight.

“I was in a nearly morbid state of sensitivity,” he wrote later. “The entire world, down to the marble of the buildings and the fountain, appeared to me to be convalescing. In the middle of the piazza was a statue of Dante draped in a long cloak. The autumn sun, tepid and unloving, illuminated the sculpture and the church’s façade, and I had the uncanny sensation that I was seeing things for the first time.”

That momentary delirium was the trigger for an unsettling style of modern painting.  Going against abstract trends, de Chirico took to composing deserted streetscapes within shadowy contemporary cities under empty skies.  Nowadays his scenes look old fashioned, but at the time they were arrestingly up-to-date, featuring that architectural style used in recent decades to rebuild then ultra-modern Paris, Vienna and Turin.  This was heightened by the artist’s decision to synthesise views out of pictorial elements lifted from various Italian cities: a street-length arcade from central Milan, the clock at Florence’s railway station, that colossal tower on Strada Maggiore in Bologna. De Chirico represented all in a manner owing more to book illustration than to high art.  No effort was made to model objects; colour was applied as flat ‘fill’; buildings and objects had black outlines; perspectives were deliberately skewed.

Turin, which aspired to become an industrial centre, was a key source for imagery.  De Chirico had made a trip there in homage to Friedrich Nietzsche, sometime resident of that city.  The artist walked the same streets and avenues as his idol, but what gripped his attention was the spot where twenty years earlier the sickly philosopher had famously collapsed.  Outwardly this was due to seeing a delivery man whip a weary horse to death when it could not haul a heavy cart.  A distressed Nietzsche became manic, remonstrating with the carrier, then fainting away before onlookers.  We know now this was the opening episode in the philosopher’s fatal passage into insanity: syphilis was consuming his brain.

That arcaded Turin street, an empty horse float, a statue of a civic worthy nearby, the ornate spire of the Mole Antonella rising over the city—these motifs in de Chirico’s pictures pointed to a poisonous modern world where reason collapses into diseased madness.

Parisian artists and bohemians were enthusiastic when the brooding cityscapes were exhibited in the capital of progressive culture.  De Chirico’s cryptic works ran deep, making serious claims about contemporary life.  Besides, here was a challenge to the new fangled abstracts of Picasso and his cubist acolytes.

Giorgio de Chirico called his own style Pittura Metaphysica—a tricky term often clumsily translated and misunderstood.  ‘Philosophical compositions’ would be a better approximation because, like Plato’s allegory of the cave, their purpose is to explain reality.  Indeed, they pressed the young artist’s conviction that over-regulated modern society pulls us down.

Tellingly, de Chirico used the words ‘enigma’ and ‘mystery’ in many titles, emphasising how the picture is an allegory.  This intent is also behind recurring motifs.  No less than seven early pictures featured the same marble statue, a semi-nude reclining female figure upon a low plinth in a deserted piazza.  Those familiar with classical culture instantly recognised it as an esteemed and much copied sculpture of Ariadne, the princess of Greek myth held captive in a dark maze by the predatory Minotaur.  The supposedly enlightened contemporary world is deceptive, such pictures suggest, a treacherous labyrinth in which monstrous things lurk. 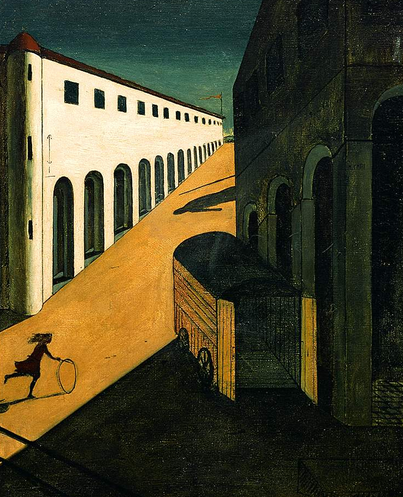 This was poignantly conveyed in a stirring picture (above) of 1914, Mystery and Melancholy of the Street, which shows a silhouetted girl with a toy hoop playing on a lonely long street filled with sinister shadows.  An instant modern icon, its unmistakable theme is innocence and danger in a world overflowing with unseen peril.

De Chirico’s allegorical paintings took on an anxious edge during the First World War.  Dressmakers’ dummies now appeared within them, often accompanied by chalkboards covered with impenetrable ciphers and diagrams.  The allusions to political figures and their risky plans was unmistakable. 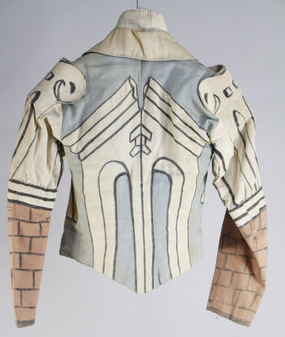 Those brooding pictures would cast a long shadow.  Illustrated art magazines circulated the imagery widely; the Ballet Russes took on tour a provocative ballet designed by de Chirico (left); while many forward-thinking Italians involved with the arts spread his unsettling message, even to far-off Melbourne, where an exile from Mussolini’s fascist regime settled in the 1930s—the bookseller Gino Nibbi.  A friend of de Chirico, he displayed original lithographs by the artist in his shop on Little Collins Street.  Nibbi would discuss these pictures with customers or inquisitive people who stepped inside just to look.  No wonder every progressive writer, artist, musician, actor and aspiring bohemian in that city was familiar with de Chirico’s images.  The bookseller even lined up an introduction for one young painter, Albert Tucker, to meet his idol when he travelled to Europe after the Second World War.

De Chirico’s aesthetic insistently influenced modern Australian painters of a certain generation.  We see this when Russell Drysdale hits his stride with his desolate rural paintings made around Hill End and Sofala, and when Charles Blackman composed his “Schoolgirl” pictures (below) featuring grim shady streets crammed with uniform terraced houses.  The stylistic debt of the two artists is unmistakable, in fact, as a witty salute Blackman substituted in some works a skipping girl borrowed from a well-known vinegar advertisement for the master’s iconic girl with hoop. 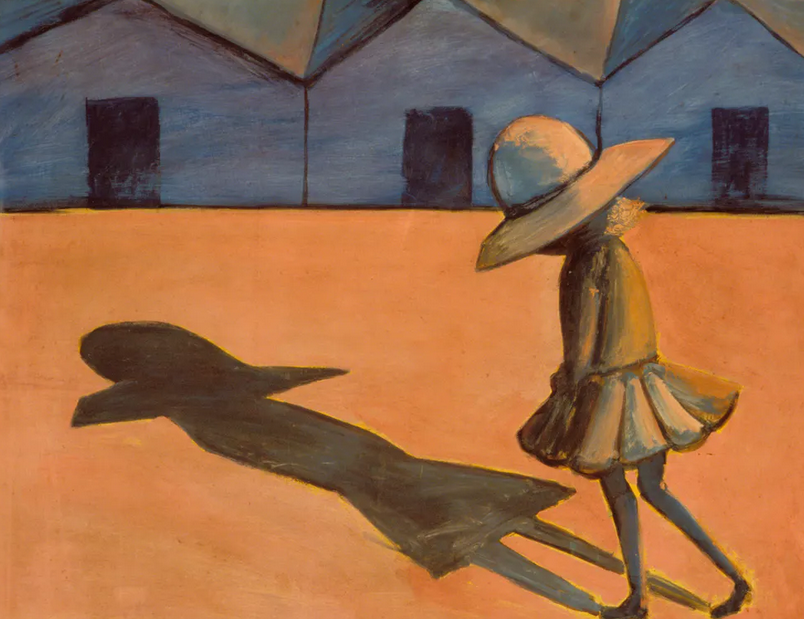 Books on Jeffrey Smart usually dwell on his interest in the Old Masters, but de Chirico and pittura metafisica were recurring topics when I chatted with him.  He possessed an encyclopaedic knowledge of the movement, which is mirrored in his own paintings.  Immersed in that industrialised Northern Italian region spanning Milan, Turin and Genoa, his boldly contemporary scenes have been assembled from a repertoire of bland apartment buildings, austere warehouses and traffic-less autostrada with a lonely figure or two wandering between ominous shadows.  And these consciously unsettling pictures update the same driving message of early pittura metafisica: ‘Man has made prisons for himself in every city,’ Jeffrey Smart once explained, ‘and for the ordinary person escape is impossible.’

This intrusive over-regulated modern Italy conceals a lurking menace that threatens us all.

Christopher Heathcote is a regular contributor