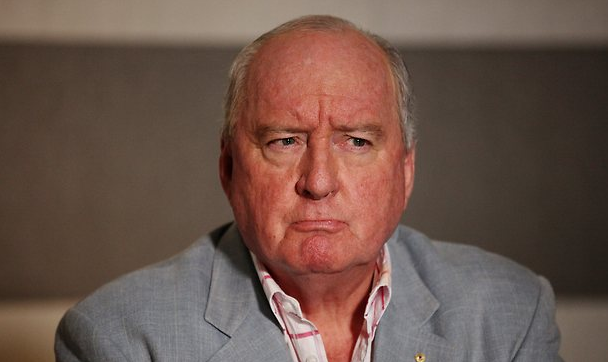 I had not been one of Alan Jones regular listeners until about three years ago, when what grabbed my curiosity was the sheer volume of hate and vitriol directed at him. Typical of the Left and its social media legions, the attacks were almost always personal, seldom about the content of what he had to say. “He must be doing something right,” I thought, taking the measure of his enemies. So I started listening.

This week, haters all over the country, even those in parts where his radio show isn’t heard, are rejoicing that Jones is switching off his microphone for good at the end of the month. So why all the hate? Jones expresses opinions on many topics, opinions with which many disagree. Heavens, I disagree with him at times, but I don’t hate him. So why does he animate his critics to fits of frothing and fury? Why have they campaigned for advertiser boycotts, signed petitions demanding he be taken off the air, blitzed regulators with complaints and called on his employer to zip his lip? Why do they go into outrage mode so quickly when he makes a genuine slip and then exaggerate the size of the gaffe with the bare-faced aplomb of a sporting fisherman describing his hooked tiddler as a giant marlin? Why do they  portray him as racist, misogynist etc etc whenever he articulates an uncomfortable truth or opinion?

The simple answer is that they cannot and will not tolerate having their precious views and ideologies challenged. Oh, they can dish it out alright — the abuse and vilification, the concerted attempts at character assassination, the threats against sponsors threatened with guilt by association. Do what Jones does, pick apart their causes and arguments, and the cry-bullies of the Left switch from rabid attacks to feigning the delicacy of soap bubbles. ‘Oh, we’re so offended, boo hoo’ and ‘What he said is so inappropriate’ — you know, that sort of thing. 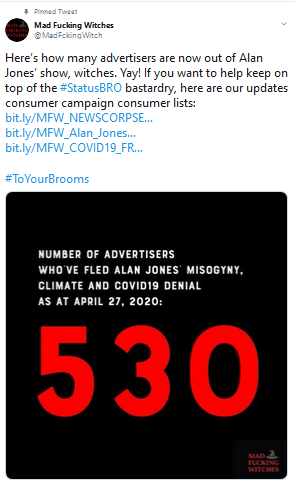 They are lightning fast to take offence because in today’s woke world being offended has the power to silence others. Most of us have been on the receiving end of an ‘I’m offended!’ and know the pressure of expectation that we must change our thoughts, words and beliefs. And if we can’t reform ourselves as ordered the demand is a simple and salty ‘Just shut the **** up.” Notice the hypocrisy? In their pleas to be insulated from ‘offence’, the Left spares not a thought for those genuinely offended by obscene language. The fact that one of the chief social media entities calling for Jones’ sacking goes by the name of ‘Mad F***ing Witches’ — one of their tweets is at left — says it all.

Jones, along with Andrew Bolt, is enemy #1 for the snowflakes, the woke and whinger ninjas of the ‘caring’ Left for all the messages he delivers that they don’t want to hear and believe others should never hear. Over the years, by assembling facts and coherent arguments, Jones has clobbered them, not least by defying their campaigns and continuing to broadcast.

Now I am not saying that Jones is always right. Many Quadrant Online readers, I imagine, look askance at his vocal opposition to fracking. Nor am I suggesting that his choice of words is always the best. Consider, as one example, the calls to haul Jones off the air for suggesting that Prime Minister Morrison deal with Saint Jacinda of Aotearoa by shoving “a sock down her throat”. Didn’t the mob go to town on that one! ‘He’s encouraging violence against women’, the bleating Left cried in orchestrated unison. That particular episode of outrage was confected, as usual, and baseless too. Had Jones used that venerable expression “stick a sock in it”, would his critics have found grounds for complaint?  Probably, but it would have required an even greater effort to do so with a straight face.

As well as providing insightful commentary on a variety of important topics, Jones’s ability to send his detractors into immediate meltdown has been a fantastic source of entertainment, there being few things quite so grotesquely amusing as an apoplectic leftoid mob feeding on its own outrage. In order to justify their attacks his critics trawl through the many years of his broadcasts to find the quotes that can be presented as proof of his inherent evil. Judging by radio ratings, the very many Australians who tune in must be evil too. But most of us are not public figures like Jones, so what does this mean for our right to dissent from leftist orthodoxy? If he and others like him can be silenced by people chanting ‘Offence! Offence! Offence!’ then any one of us can be silenced. Our right to express opinions, to disagree and demand the Left justify what pass for its arguments, is increasingly being stripped away. If Jones’ long career teaches us anything it is that we need to contest the Left at every turn. If we let their inclinations to control and censor go unchallenged, they hip-and-shoulder civil debate from democracy’s stage and force it further into the wings.

Many, like myself, when wanting to express a concern because we feel something isn’t quite right, sometimes decide it just isn’t worth the effort. All it takes is for your snowflake interlocutor to say “You offended me and hurt my feelings” and then, suddenly, you are accused of being a bully. As has happened so often to Jones, some sniveling  prig might even go running to your boss with the demand that you be fired forthwith. Actually, it wouldn’t be just one complainant, as the Left’s trolls and skirmishers always hunt in packs.

For those hell bent on silencing others with whom they disagree, keep in mind that clamping the lid on a boiling pot guarantees it will soon or later boil over. Healthy, open and civil debate stops the pressure building, forestalls the eruption of anger arising from enforced silence and frustration. Debate of the kind Alan Jones has promoted for decades should be lauded, never stifled or outlawed.

Mr Jones, thank you for firing up the furnaces of public debate — thank you even when I think you’ve got it wrong.