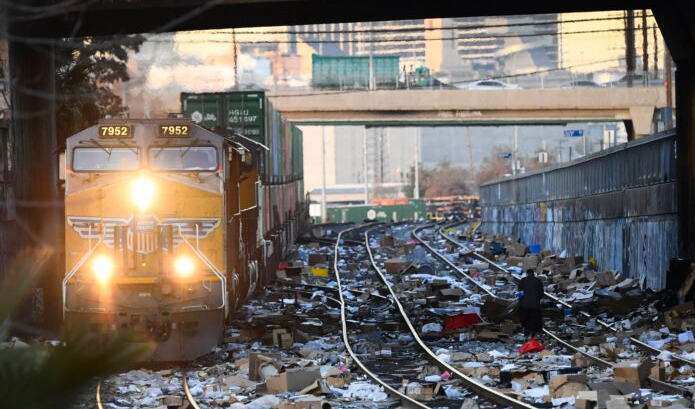 In a soundbite straight outta Compton, California governor Gavin Newsom blamed “organised groups of folks that move from site to site” for a spate of New West train robberies (above) in Los Angeles. His first instinct was to call them “gangs”, but he immediately apologised, publicly acknowledging his error. The word “gangs”, you see, is pejorative to … well, gangs.

Luckily for the gangs of L.A., Newsom and the Democratic Party have made the New West a safe space for criminals of all kinds. In Los Angeles, the newsmakers are the organised groups of folks who board trains leaving the west coast ports to ransack containers arriving from China (they’re probably racist Trump supporters), while in San Francisco it’s the folks who organise flash robberies of department stores and shopping malls.

At least 48 Los Angeles gangs are prominent enough to have their own Wikipedia pages. A personal favorite is the Culver City Boys, which sounds like a group of folks who do odd jobs on the MGM Studies lot, or perhaps for the west coast offices of National Public Radio. In 2018, the Boys won a $30 million settlement in a class action lawsuit over city-imposed curfews. Don’t be shocked: gangs hiring lawyers is an old tradition in America. That’s how you know they’re gangs, not just groups of folks.

The Culver City Boys are reputed to be composed mainly of Mexican-Americans. The Rollin 60’s Neighborhood Crips, one of California’s oldest gangs (as the name would suggest), is believed to be largely African-American. The shot back to national prominence in 2019 with the death of rapper and entrepreneur Nipsey Hu$$le, a member who was shot at least six times in front of his clothing store in a dispute of obscure origin. Police believe the shooting arose out of a “personal dispute”, but a case of shoplifting gone wrong cannot be ruled out.

California is, of course, enjoying a wave of (minor) wealth redistribution arising from Proposition 47, a ‘successful’ 2014 referendum that reclassified many erstwhile felonies (including all thefts to a value of less than $950) as misdemeanors. In the spirit of the times, state prosecutors no longer bring charges in these cases, since the maximum penalty is only six months in jail (rarely imposed) or a fine of up to $1000. In the likely worst case scenario (or best case, depending on your point of view), most thieves will thus only be required to return the stolen goods. Stealing is, essentially, legal.

So it is quite possible that the Hu$$ler only got plugged because he tried to stop a shoplifter from walking out with a $100 hoodie. After all, it’s not like he would have bothered to call the police. Maybe what California really needs is a Neighborhood Crips class action, taking the state to task for not providing security. The Culver City Boys got $30 million in community services; maybe the Rollin 60s can get $30 million in community policing. It’s worth a shot. A metaphorical shot, that is.

The Diamond and the Oval Office