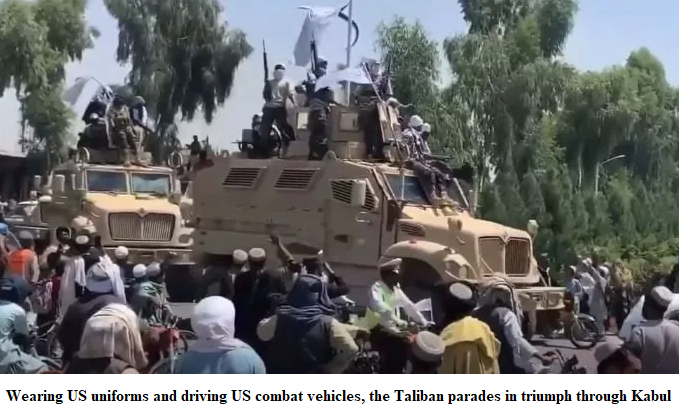 Maybe someone should hire Joe Biden to teach philosophy, or at least be in the classroom. You don’t have to be Ludwig Wittgenstein to appreciate the important philosophical lesson that our understanding can be bewitched by language. This can happen in a number of different ways, many of them illustrated daily by the President of the United States.  One lesson revolves around the unpalatable truth that saying something is so does not make it so. Joe Biden gave a sterling illustration of that lesson the other day at one his weirdest press conferences to date.  His withdrawal from Afghanistan, he barked madly at the cameras, was an “extraordinary success.”

Yes, he really said that.  It was a success more or less in the same sense that Napoleon’s withdrawal from Moscow in 1812 was a success, that is to say, it was so extraordinary a success that it was an abject failure.  It was not quite so bad as the withdrawal of Maj. Gen. William Elphinstone from Kabul in 1842, perhaps—the only European to make it out alive from that debâcle was a badly wounded army surgeon—but it was certainly nothing to brag about.

It will be many years before we get a full and accurate measure of the repercussions of this humiliating event. It has gravely damaged the already tottering administration of Joe Biden. It has disconcerted our friends. It has emboldened our enemies.  And it is marked another waypoint on the “melancholy, long, withdrawing roar” of American power.

The world has been especially stunned by two things the Biden administration left behind in Afghanistan.  The first was the huge armory of military hardware and supporting matériel. Estimates of the value of that gift to the Taliban have varied widely from many hundreds of millions to $80 billion. Whatever the figure, it was a lot.

According to one assessment, the US left scattered in seven Afghan army garrisons across the country, from Kabul and Kandahar to Herāt, Mazār-i-Sharīf, and Kunduz, 22,174 armored Humvees, 42 pickup trucks and SUVS, 64,363 machine guns, 162,043 radios, 16,035 night-vision goggles, 358,530 assault rifles (the real ones, not the “assault rifles” that Joe Biden warns about in the United States), 126,295 pistols, and 176 artillery pieces. There was also plenty of ammunition to go along with all of that loot.

And that’s just for starters. The United States also generously left behind more than 100 helicopters, including 33 Blackhawks, four C-130 transport planes, and about 60 other fixed-wing aircraft. It didn’t take the Taliban long to learn how to fly the Blackhawks, either.

A question that has yet to be answered is why we did this.  Why did the US military leave all that prime military equipment behind for an Islamic death-cult to use against its own population and, in due course, against the West? Why didn’t we destroy it? As far as I know, no one has answered those questions.

Of course, military hardware isn’t all that we left behind. The “extraordinarily successful” evacuation also left behind hundreds of Americans—how many hundreds we have yet to discover—as well as many, many Afghan interpreters and support staff that have been aiding the US effort in Afghanistan for, lo, these 20 years.  One family that was left behind includes an interpreter who saved Biden’s and John Kerry’s lives during a snowstorm behind enemy lines in 2008.

It gets worse. Did you know that the United States is soon to be home to tens of thousands of Afghan refugees, many—if not most of them—Islamic fundamentalists? Did you know that, in its partnership with the Taliban (sounds odd doesn’t it?), the Biden Administration actually gave the Taliban the names of Americans and our Afghan allies. Yes, you read that right. “In a move no one can grasp,” Politico reported, “US officials in Kabul gave the Taliban a list of names of American citizens, green card holders, and Afghan allies, believing the Taliban would allow them to enter the militant-controlled outer perimeter of the city’s airport. Lawmakers and military officials are outraged.”

Why would the United States do that? No, it’s not that the people we elected to govern us trust the Taliban. In one of his pressers, Joe Biden made that clear. He doesn’t think the Taliban are nice people. But he is appealing to their “self-interest,” you see. We partnered with them, we asked them to set up and man the checkpoints on the roads coming into the airport, and we felt confident in doing so because, after all, it is in their interest to play fair. They will do what they say they are going to do—and, more to the point, they won’t do what we fear they might do, things like attack Americans—and we will do what they want, i.e., leave Afghanistan.

Have you ever heard anything so preposterous? In Notes from Underground, Dostoyevsky treated this liberalizing naïveté to some portion of the contempt it deserves. “Oh, tell me,” Dostoevsky wrote,

. . .  who first declared, who first proclaimed that man only does nasty things because he does not know his own real interests; and that if he were enlightened, if his eyes were opened to his real normal interests, man would at once cease to do nasty things, would at once become good and noble because, being enlightened and understanding his real advantage, he would see his own advantage in the good and nothing else . . . Oh, the babe! Oh, the pure, innocent child!

Joe Biden apparently thinks, or says he thinks, the Taliban will make nice because it is in their interest to do so.

No wonder the Taliban are busy trolling the Biden Administration, posing with ice-cream cones, re-enacting the iconic flag-raising at Iwo Jima in American uniforms but with a Taliban flag, vowing to battle “climate change” and ensure women’s rights “under Islamic law.” Ha ha ha. That’s the playful side of an ideology whose dark purpose was summed up by an Islamic radical in the aftermath of 9/11. “We are not fighting so that you will offer us something,” he said. “We are fighting to eliminate you.”

Accordingly, the proper response to this ideology is not to offer it partnerships in the hope that you can make a mutually satisfying deal that caters to everyone’s “self-interest.” On the contrary, the proper response is to understand, as Benjamin Netanyahu put it, that we are dealing here with “a war to reverse the triumph of the West.”

Our leaders, from a mentally compromised president through the puffed-up woke triumvirate of Secretary of State Antony Blinken, Defense Secretary Lloyd “stand down” Austin and Chairman of the Joint Chiefs Mark “white-rage–I-read-Karl-Marx” Milley, are constitutionally incapable of taking that reality on board. They are figures fit to lead the Eloi, H.G. Wells’s effeminate utopian spawn, not patriotic Americans.

We have a secretary of defense that testified to Congress in May that the Afghan National Security Forces could withstand the Taliban advance. We have [members] of the Joint Chiefs . . . who’s supposed to advise on military policy. We have a Marine combatant commander. All of these people are supposed to advise. . . .  I’m not saying we’ve got to be in Afghanistan forever, but I am saying: Did any of you throw your rank on the table and say ‘Hey, it’s a bad idea to evacuate Bagram Airfield, a strategic airbase, before we evacuate everyone’? Did anyone do that? And when you didn’t think to do that, did anyone raise their hand and say ‘we completely messed this up?’

He went on to explain that “the reason people are so upset on social media right now is not because the Marine on the battlefield let someone down [but] . . . because their senior leaders let them down and none of them are raising their hands and accepting accountability.” Scheller was not surprised that he was relieved of his command for posting the video. The 17-year veteran knowingly put his career and his reputation in jeopardy to bring attention to the dereliction of duty by his senior officers. “My chain of command is doing exactly what I would do . . . if I were in their shoes,” he wrote. Scheller subsequently offered his resignation from the Corps.

In the aftermath of the terrorist slaughter at the Kabul  airport on August 25 that killed at least 170 people, including 14 US servicemen, the Biden Administration announced that it conducted a drone strike that may have killed two people who might have been ISIS-K “planners.” We don’t really know, however, because the Pentagon will not release the names of the targets.  In other words, as the commentator Raheem Kassam observed, “Joe Biden gave a list of Americans to the Taliban but won’t give the names of the terrorists he claims to have retaliated against to the American public.” I suppose the attack was in fulfillment of the little currant of tough talk someone inserted into Biden’s remarks: “We will not forgive, we will not forget, we will hunt you down and make you pay.”

Roger Kimball is editor and publisher of The New Criterion, New York