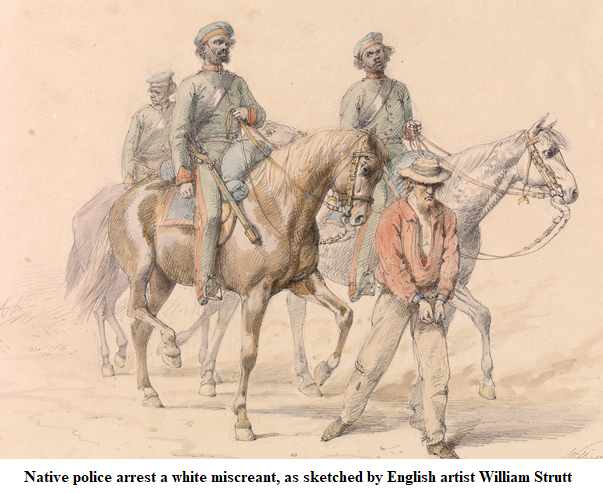 Activist historian Henry Reynolds had a recent article in the Canberra Times supporting the obscene proposal to incorporate in the Australian War Memorial presentations and depictions of atrocities committed against Aborigines. He writes:

A new generation of historical research has provided powerful confirmation of the extent and duration of the ‘killing times’, particularly during the conquest of north Australia in the second half of the nineteenth century.  The work of Lyndall Ryan and her team at the University of Newcastle has mapped massacre sites all over the continent.

Extensive new research, concerning the Native Mounted Police, has raised the possibility the Aboriginal death toll may have been well over 60,000.  This would push the casualties in the frontier wars to a figure rivalling the total loss of Australian lives in the First World War.

The most innovative development in the relevant scholarship is to focus on Aboriginal resistance in its many forms, not to concentrate only on their fate as victims.

The above passage employs a technique perfected by Uncle Professor Bruce Pascoe in his award-winning book Dark Emu – the air brushing of ‘inconvenient truths’. The clear implication is that the research conducted by Professor Ryan and her team supports Reynold’s contention that up to 60,000 Aborigines could have been killed.

It is true that the most authoritative database of incidents in which Aborigines were killed in clashes with whites is maintained under the direction of Professor Lyndall Ryan.  Scores of historians have, over a number of years, scoured the historical record to dredge up every last Aboriginal death they could find. They have documented 416 incidents which reportedly resulted in the death of some 11,000 Aborigines.

How is it possible, then, that this legion of researchers, anxious to plumb the very depths of this well, could have overlooked 50,000 deaths?

The research that Reynolds claims “raised the possibility” of 60,000 deaths did not come from the work of Ryan and her team, as he would clearly have you believe. So, what evidence does he provide to support his claim? Well not much. He goes on to say:

The most innovative development in the relevant scholarship is to focus on Aboriginal resistance in its many forms, not to concentrate only on their fate as victims.

In other words, he can’t back up his claim with a body count so he is relying on studying tactics that might or might not have been employed by Aborigines and which would suggest an organised  military ethos. He then goes on to give three examples of individual Aboriginal ‘resistance’, without providing any estimate of how many Aborigines were killed in any of these ‘operations’.  That would not have taken up too many words, I would have thought. Reynolds then says:

Above all we need to be able to explain how they were able to avoid endless attempts to bring on an open confrontation.

That sounds very much to me like an excuse for his failure to substantiate his death toll estimate.  If the Aborigines were so adept at avoiding open confrontation, how could they possibly have sustained casualties as high as 60,000? Further:

In his statement Brendan Nelson spoke of the violence committed against the Aboriginal people but it is most important that the memorial is now able to investigate the aboriginal resistance and see it as a military operation.

Reynolds is not concerned with deaths per se, but that they should be attributed to war or warlike military operations on a large scale. That is central to his thesis that Australia was not settled but invaded.

What happens next if these activists get their ‘Colonial Wars’ gallery at the AWM?  Will they want a tomb of the unknown Aboriginal warrior placed next to the existing tomb in the main Hall of Remembrance?  Don’t be ridiculous, I hear you say. They wouldn’t go that far.  Well, here’s what Reynolds said:

The Unknown Soldier did not fight for empire. He fought for Australia and/or Britain and its values, and he was killed in France. I was not aware that Villers-Bretonneux formed part of the British Empire.  And he is not there to represent just the just dead of World War I. He is there to represent the dead of all our wars. So, even if you accepted the premise of ‘colonial wars’, you are distinguishing between the combatants of each side, rather than honouring them collectively.  That sounds divisive to me. So what about a Japanese tomb as well?

If they get their special gallery, can the Tomb of the Unknown Warrior be far behind? Especially if the Voice’s third chamber of Parliament is established. This proposal is just one more step in the push for a separate Aboriginal sovereignty to divide this nation based on race.

And on that subject, there would appear to be somewhat of a logistical problem.  How do you get your hands on the cadaver of an unknown Aboriginal warrior?  You might choose one of a set of 37 Aboriginal remains returned to Australia in 2019.  But what are the chances it would have actually been one of those warriors?

I have a better idea.  We could wait until Uncle Bruce Pascoe shuffles off, as he is eventually destined to do, and inter him.  Certainly, he is known, not unknown, but he is certainly a warrior allegedly advancing the Aboriginal cause (and the cause of his bank account).  And the fact that he’s not really Aboriginal would mean that the Tomb would tick only one of three necessary boxes – that of being a warrior.  That would mean that the Tomb of the Unknown Warrior would be as fake as the ‘Colonial Wars’ it would purport to represent.  Or just leave it empty with the same effect.  Perfect.

Aboriginal Youth Suicide Goes from Very Bad to Much Worse

The Magic Pudding of ‘Reconciliation’