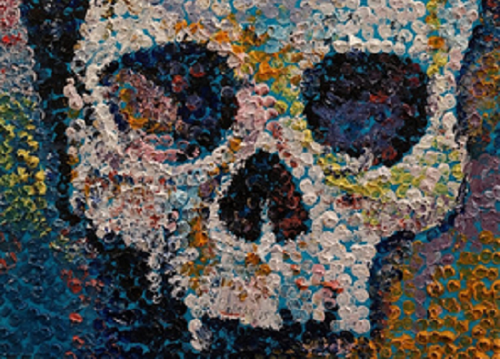 A common modern myth holds that primitive societies were more peaceful, although given the consistency of human nature throughout recorded history one must wonder how anyone could reach such a conclusion. Yet the myth has grown stronger in recent decades despite all the clear evidence to the contrary. Beyond the high rates of cranial trauma in female Aboriginal skeletal remains and the well-documented violence against women in their tribal societies, the power of the belief that these groups were less violent does not diminish. ‘Never let facts get in the way of a good story’ has always applied, never more than to Aboriginal issues and the gross misconception that a Utopian world of placid and pacific people existed before Europeans arrived. Such fables are the fertile soil from which those who seek to demonise others on the basis of race and inherited guilt draw their sustenance .

As Tony Thomas wrote in Quadrant‘s May, 2013, edition, paleopathologist Stephen Webb in 1995 published his analysis of 4500 individuals’ bones from mainland Australia dating back 50,000 years. (Priceless bone collections at the time were being officially handed over to Aboriginal communities for re-burial, which stopped follow-up studies). Webb found highly disproportionate rates of injuries to women’s skulls, suggesting deliberate attacks, often from behind.

In the tropics, for example, female head-injury frequency was between 20 and 33 per cent, versus 6.5-26 per cent for males. The most extreme results were on the south coast, from Swanport and Adelaide, where female cranial trauma rates ran as high as 40-44 per cent — two to four times the rate of male cranial trauma. In desert areas, 5-6 per cent of female skulls showed evidence of three separate head injuries inflicted over time, and 11-12 per cent had two injuries. Webb could not rule out women-on-women attacks but thought them less probable. The high rate of injuries to female heads was the reverse of results from studies of other peoples. His findings, according to anthropologist Peter Sutton, confirm that serious assaults were common in Australia over the thousands of years prior to the First Fleet.

The evidence from experts in relevant fields which challenges these myths has never been more important. Some of the books written in the past would not be published today due to their unpalatable truths — but they do exist and that is what matters as layers of fake history accrete into a monolith of misinformation.

Common sense would say the less secure an environment, the more violence will occur, particularly when people are fighting for life-or-death resources, as they were in primitive hunter-gatherer societies. Survival was the mindset and modus operandi of all primitive peoples and this would not, could not, change until they developed sufficiently to assure reliable food supplies. Necessity may well be the mother of invention, as we moderns say, but in primitive times necessity sired violent desperation. Most people today would consider infanticide, cannibalism and agonising, often deforming, initiation rituals common amongst Aboriginal peoples as shockingly violent, and they were. These practices were actively condemned and discouraged by the Europeans who colonised Australia. On this count alone, the arrival of the British introduced a less violent system to Aboriginal societies. And the provision of rations by the British reduced the uncertainty of life and the need for war.

We only have to look through well-documented British and European histories to see how violence diminished as societies became more secure and more enlightened. The lack of development in primitive cultures, such as those in pre-contact Australia, must as a matter of course mean violence was the norm. As psychologist Jordan Peterson puts it in a short few words: “Hunter-gatherers, too, are much more murderous than their urban, industrialized counterparts, despite their communal lives and localized cultures.” 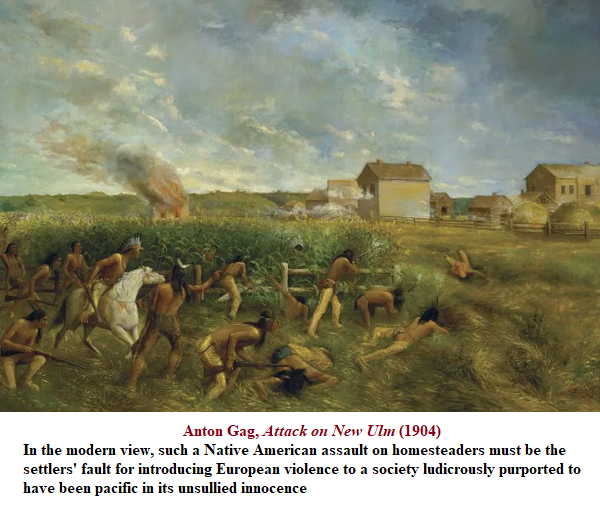 The figures bear out Peterson. The yearly homicide rate in today’s UK is about 1 per 100,000. It is four to five times higher in the US, and about ninety times — yes, ninety — higher still in Honduras, which has the highest recorded murder rate of any modern nation. The !Kung bushmen of Africa, romanticized in the 1930s by Elisabeth Marshall Thomas as “the harmless people”, had a yearly murder rate of 40 per 100,000, which declined by more than 30 per cent once they became subject to state authority. This is a very instructive example of complex social structures serving to reduce, not exacerbate, the violent tendencies of human beings. Yearly rates of 300 deaths per 100,000 have been reported for the Yanomami of Brazil, famed for their aggression, but the stats don’t max out in the Amazon. Closer to home, the people of Papua New Guinea kill each other at yearly rates variously ranging from 140 to 1000 per 100,000. However, the bloodiest record appears to be that of the Kato, an indigenous people of California, 1450 of whom per 100,000 met violent deaths in the 1840s, as Lawrence H. Keeley notes in War Before Civilization: The myth of the peaceful savage. As the publisher’s blurb puts it:

… To support this point, Keeley provides a wide-ranging look at warfare and brutality in the prehistoric world. He reveals, for instance, that prehistorical tactics favoring raids and ambushes, as opposed to formal battles, often yielded a high death-rate; that adult males falling into the hands of their enemies were almost universally killed; and that surprise raids seldom spared even women and children.

Keeley cites evidence of ancient massacres in many areas of the world, including the discovery in South Dakota of a prehistoric mass grave containing the remains of over 500 scalped and mutilated men, women, and children — a slaughter that took place a century and a half before the arrival of Columbus….

In defense of this thesis, Keeley devotes most of his well-written book to discussion and documentation of several aspects of pre-contact native warfare, some of which he judges as superior to modern battle, including weapons, tactics (more frequent encounters and raids rather than fewer but prolonged actions), forms of combat (small ambushes and larger raids on settlements preferred), and casualties (much deadlier than modern war in terms of deaths relative to total population). The author also considers the material gains and losses of native war, especially the high logistical vulnerability of small-scale societies to looting and destruction.

Keeley devotes several chapters to the causes and contexts of non-state warfare, ultimately concluding that conflict is less closely associated with population density than with any situation that requires or encourages exchange or mutual acquisition of desired resources between societies. He argues

the fact that exchange and war can have precisely the same results is often forgotten by archaeologists. When exotic goods are found at a site, they are almost invariably interpreted as being evidence of prehistoric exchange. That such items might be the spoils of war seldom occurs to prehistorians … Thus archaeologists doubly pacify the past by assuming that all exotic items are evidence of exchange and that exchange precludes war. The ethnographic evidence implies that both of these assumptions are invalid; war moves goods and people just as effectively … as exchange, and exchange can easily incite warfare. 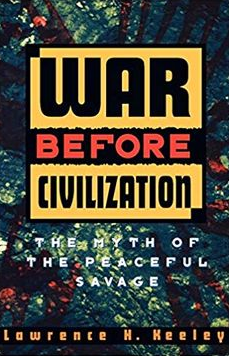 however, is not clearly defined: does it refer to border areas between societies, or does it include outside groups from the perspective of a given center?)

A particularly interesting chapter sees Keeley examine the reasons why the urge to “pacify the past” has seduced Western scholars, a mindset he identifies as arising from the aversion to war that developed following the bloody traumas of World Wars I and II and the apocalyptic fear of nuclear annihilation during the Cold War. In such a setting, the nastier aspects of observed native life came to be explained as the result of Western contact — and thus was native war recast as the epitome of the evils that “civilization” and “progress” inflict on tribal life. Presto! The past becomes more peaceful, virtuous and happy than modern life for no better reason than the wish for it to have been so. As American essayist Barbara Ehrenreich writes in 1997’s Blood Rites: Origins and History of the Passions of War, ‘humans have been killers longer than they have been humans’. To deny the warts-and-all reality of Aboriginal peoples also denies their humanity and their truth.

History serves a valuable purpose when it is sourced in facts that provide insights into human behaviour and outcomes, for these can help to guide us into the future. When history is sourced in fantasy and fabrications, as is increasingly common today, particularly in regard to indigenous peoples, there is no wisdom to be gleaned and to guide. Instead, beliefs, policies and actions will spring from distorted and dangerous presentations of human nature.

Real history is a record of human behaviour which provides foundational understanding; fabricated history —  mythstory, if you will — is no more than a reflection of the author’s imagination. Valuable as fiction perhaps, but destructive when called history.

27 thoughts on “The Little-Mentioned Ignoble Savage”

Traditional Culture is the Problem, not the Solution