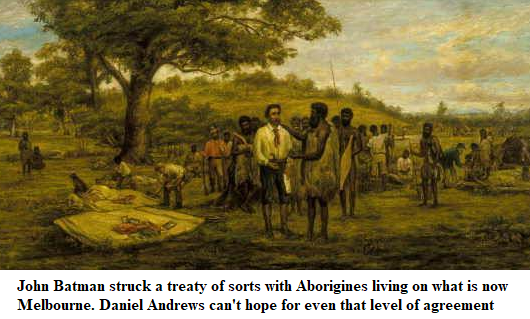 In 2019, the Victorian government of Premier Daniel Andrews announced it would set up a First People’s Assembly to prepare for “treaty negotiations” with Aboriginal “sovereign First Nations”. One can only assume that “sovereign First Nations” is another way to describe citizens who are descendants of Aborigines who lived in what is now Victoria when the first settlers arrived.

It appears to have escaped Mr Andrews’ attention that an Australian state has no power nor authority to enter into a formal treaty of the kind recognised by international law. States or provinces cannot enter into treaties, it’s that simple. Mr Andrews should know this from bitter experience, having seen his secret Belt & Road pact with Beijing scuttled by the Morrison government. Only sovereign nations can enter into treaties recognised by international law.

The Andrews government proposal for Victoria to enter into multiple treaties with identifiable Aboriginal groups was raised in parliament on June 22, 2022. In his dissenting speech to parliament on the proposed treaties, Member for Kew Tim Smith put it succinctly: “You can’t enter into a treaty with your own fellow citizens”. Unlike his fellow Liberals and their Nationals partners, Smith crossed the floor rather than support what he regards as an abomination.

Drawing and expanding upon the Aboriginal demands contained in the Uluru Statement of 2017, the Referendum Council established by the Turnbull government raised three significant and very controversial proposals in its Final Report for consideration by the Australian people and parliament. One of those proposals, drawn directly from the Uluru Statement, was for treaties between federal and state governments and Aboriginal groups able to trace ancestry to tribes in existence before the First Fleet.

No one appears to have told the  Uluru delegates — or members of the Referendum Council, for that matter — about what a  treaty needs in order to be valid under international law. Hint: it requires more than a formal amity between those overseeing a piece of, in this instance, the Australian land mass and a particular ethnic, racial or cultural group already residing, and accorded full rights, in that jurisdiction.

The time is long overdue for politicians to be honest and tell Aboriginal Australians that the time for genuine treaties is long past. The time for treaties was certainly dead by Federation, when every Aborigine and every person of Aboriginal descent became citizens of the Commonwealth of Australia.

Perhaps inspired by thoughts of the Waitangi Treaty of 1840 in New Zealand and the 29 treaties entered into between the United States and American Indian tribes between 1778 (Delawares) and 1868 (Treaty with the Sioux Confederation at Fort Laramie), treaty advocates fail to notice why those pacts are entirely different from that which they wish to achieve. The Maori and American Indians were not citizens of New Zealand or the United States when their chiefs signed. The Waitangi Treaty was an attempt to halt bloody warfare between British colonists and Maoris defending their own sovereign homelands. The Maori chiefs agreed in the Waitangi Treaty to become citizens living under the British Crown. The American Indian chiefs agreed to halt warfare with the United States and to their people becoming citizens of the when each of those twenty-nine treaties was signed.

In 1988, Prime Minister Bob Hawke attended the taxpayer-funded annual Barunga Aboriginal Festival in the Northern Territory, where Aboriginal representatives presented him with the Barunga Statement which demanded a treaty between Aboriginal Australians and the Australian Federal government. Hawke signed the Barunga Statement and promised “a treaty within the life of this parliament”. Having returned to Canberra, Hawke discovered that he could not deliver on his pledge because international law does not recognise as treaties agreements between the government of a country and any group of its own citizens.

In the end, Hawke compromised by creating the elected Aboriginal and Torres Strait Islander Commission (ATSIC) in 1990, but ATSIC was stricken with scandal, embezzlement, nepotism and corruption and was finally abolished by Prime Minister John Howard in 2004.

If Daniel Andrews knows any of this (he would be a fool if he did not), he should apologise to Victoria’s Aboriginal citizens for deceiving them into believing his government has the legal right to negotiate and enter into bona fide treaties with them or anyone else, for that matter.

The best treaty supporters can hope for is a joint ‘motherhood statement’, one whose cliches must be by definition as empty as Premier Andrews’ promises.

A Good Journalist With More Faith Than Facts