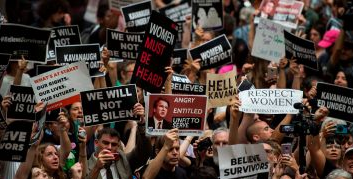 The sobbing, shrieking sisterhood in action.

It can be frustrating to live in Australia, where we have an allegedly conservative government, and watch the genuine reforms being enacted in the US by a president who grasps that paying lip service to the Left brings no dividends. America’s economy is booming as a result, while ours burdens itself with some of the world’s highest electricity prices and, as Alan Moran notes, drives jobs and industries to the other side of the Pacific. One can only guess that the Coalition prefers hobbling the nation’s prospects if the alternative is being called “a denier” by greasy-sweatered ninnies with megaphones and arts degrees.

That is why, and most especially today, frustrated Australians can savour Donald Trump’s resolute triumph in defeating, as Peter Smith writes, a concerted and entirely vile campaign of slander and smear against SCOTUS nominee Brett Kavanaugh, Meanwhile, we get a new race commissioner. Who said this is the lucky country?

Here are some of the more notable reactions to Kavanaugh’s confirmation, both pro and con. Snigger at leftoid’s frustration and fury. Enjoy the Kavanaugh supporters’ triumphalism. One day we might have reason to celebrate similar victories here.

Roger Kimball: How was it that Brett Kavanaugh prevailed where Judge Bork was rejected? In the end [it] was the president’s support. He never wavered in his public support and as the Democrats and their claque in the media got louder and more extreme, he just said, ‘See you on that and raise you 10.’

J. Christian Adams: I was in the Senate gallery this afternoon when Justice Brett Kavanaugh was confirmed.  You would have thought I was at an exorcism in an insane asylum.

Perhaps you were watching on television and heard the disruptions, though you certainly didn’t see them.  The attenuated audio probably didn’t catch the frightening, incoherent shrieking – including the lingering screaming and howling as they were being dragged down the hallways outside the gallery.

If there was any doubt that the opposition to Kavanaugh was unhinged, uncivil, disruptive, rude, and borderline nuts, my experience in the gallery made it clear.

Al Jazeera: [Ayaan Hirsi Ali] has tweeted that the Senate should ‘confirm Brett Kavanaugh’, and shared articles insisting that he is the target of a ‘set-up’ comparable to the Salem witch trials: an analogy that astonishingly manages to twist one of the most infamous exhibitions of institutionalised patriarchy into a shield for patriarchal violence.

Conrad Black: If Judge Kavanaugh is confirmed and the Republicans hold both houses of the Congress, it will be the greatest and swiftest ascension to comprehensive power in all branches of American government in history. A measurement of how the tide has shifted is the disappearance from public consciousness of the Mueller inquiry. The number of Trump-haters who are still clinging to that waterlogged life-vest is statistically trivial. It was just six weeks ago, when Michael Cohen’s plea bargain was announced and Paul Manafort was convicted (of offenses that occurred a decade before he knew the president), that Trump’s enemies ululated their triumph and proclaimed, in the words of one often-published Trump-hater, that “The fat lady is singing; it’s almost over.” She wasn’t and it isn’t. It has only just begun, and it will get better. Trump isn’t an aberrant interlude; he is a sea change. He has a mandate to clean up Washington and he plans to fulfill it.

Steve Kates: …the process did work. But in working it further exposed the raw timber of a corrupt media and political class. The system tilts not just left, but crazy left. It is no longer a case where there is overlap between the two sides. On the right, there is common sense and a continuity with our own past. On the left, there is a mad socialism, the identity politics of victimisation, and via migration and other policies of that kind, a clear desire to throw overboard all that has made Western Civilisation what it is.

Michael Barone: … spectacular and unsubstantiated charges for political gain. Which is what Senate Democrats, with the active and avid cooperation of many of their friends and fans in the press, have been doing throughout the confirmation process for the Supreme Court nomination of Kavanaugh. They have, in truth, been doing it for decades now. Character assassination has become their weapon of choice.

Jim Treacher: I’m not going to gloat over Kavanaugh’s confirmation*, but it’s a relief. It’s a major victory in the war for the truth. I’m glad that the Dems and their enablers didn’t get away with their repulsive, dishonest behavior this time, but I don’t look forward to seeing what they do next. They’ve all lost their minds, and the more their tactics backfire, the more reckless they become. I have no idea what’s next, but we all know it ain’t gonna be pretty.

It’s going to be amazing to watch the 180-degree turn when Amy Coney Barrett is nominated. Then we’ll see how much the Democrats really respect women.

Power Line’s John Hinderaker:  The Democrats’ shameful treatment of Robert Bork in 1987 has distorted our politics–not just the politics of the Supreme Court–for the last 30 years. But the slanders the Democratic Party directed toward Kavanaugh were, if anything, even more disgraceful. We will feel their impact for many years to come.

Each of the above links is worth reading in full, but this one, by The American Thinker‘s Tomas Lifson is especially so. Call it up via this link or the one below.