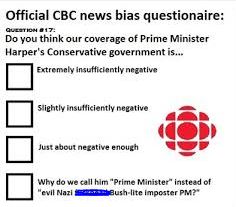 The pathetic sheltered workshop of far-left loons known as the ABC has its counterparts everywhere. For example, take Canada, which has its CBC, as unrepentant as any such bunch to be found anywhere. Below is a post — “Leave nasty comments for CBC and see what happens” — by Kate McMillan of the Small Dead Animals  blog. As the irtem’s comments thread makes clear, the only characteristic that bands together all of the comments not posted by the CBC is that they run contrary to the views of the cadres who run the organisation.

To understand the post and its comments thread, know that the NDP is the Greens equivalent in Canada and that it may yet help form a new government after the election in October. Its leader is Thomas Mulcair, while the Tories are led by Prime Minister Stephen Harper, who resembles Tony Abbott in that he is a man of common sense assailed and beset by rabid loonies. The Liberals (ie., Labor) are led by the astonishingly vacuous Justin Trudeau who, like Hillary Clinton, owes his prominence and position to his surname. Here then are Kate’s words to start the post:

We all know CBC moderates comments. Most media outlets will. We do at The Rebel, we may be free-speechers, but there are people that say things that can get us sued, they spew profanity, they can do all kinds of things. So we moderate, every media outlet does.

So why on earth is CBC doing a story on the Conservative Party moderating comments on their social media feeds, other than the obvious answer – to make the Conservatives look bad.

While the Tories, the NDP and the Liberals all have active Instagram feeds, Meg Sinclair, a spokeswoman for Facebook Canada, said Harper’s account is the only one that has launched ads to date …

… Many of the early comments on the sponsored posts were critical of Harper and his government’s policies. Those comments have since disappeared … This is only about [the CBC] showing the Conservatives in a bad light.

Try this out, go to CBC’s site and leave rude and profane comments and see if they stay up or are deleted. Then drop me a line in the comments to let me know what happens.

No one will be surprised at the results, but they should be read as a measure of the difficulty parties of the right face in every jurisdiction.

The people who run and directly control state-funded media are articulate and have the marketing of left-wing sophistries down pat. They are as devious as any leftist soap-box operator found anywhere — and they enjoy a loud and aggressive audience, which may be relatively small in terms of numbers, is ubiquitous. Regardless of country, these comment-thread howlers often boast that special mark of deep ignorance: a university degree in the humanities.

Publicly funded broadcasters have a constituency within every party, as Communication Minister Malcolm Turnbull’s benign indifference to the daily displays of bias at Their ABC confirms. Massive taxpayer funding, an adherence to green-left orthodoxy and the filtering of unwanted opinions and voices make for a formidable combination, one that has thus far proven impossible to dismantle.

Indeed, in Australia as in Canada and the BBC’s UK, these media behemoths become both more arrogant and indifferent to the opinions and voices of the larger public with each and every passing year.

McMillan’s post and the enlightening comments can be read via the link below.

A modest proposal for Nauru