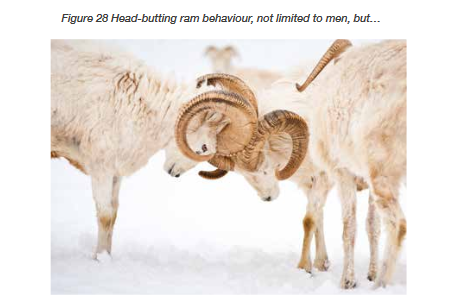 While generally deplored as a terrible thing, war has bestowed quite a few blessings on humanity — radar, battlefield medicine, computing, antibiotics, jet engines, rocketry, even instant coffee.  To that list, courtesy of the ADF and Major Liz Boulton, can now be added insights, if not yet a solution, to the age-old problem of masculinity.

In a remarkable exercise that melds military scholarship and gender studies, Major Boulton has produced a 237-page report in which profoundly modern insights dot the text like raisins in a rich pudding. The picture above, for example, is presented on page 115 as a representation of the masculine mindset. Who amongst Quadrant Online’s XY readers has not at some stage fought the urge to lower the head and charge another testosterone-poisoned victim of socially imposed gender stereotypes? Too much of that and who knows where it might lead? Charging machinegun nests? Whooping with warlike delight while bayonetting Australia’s enemies? Mistaking Albert Jacka for a role model?

Can’t have any of that, not in Australia’s oh-so-modern Army

And what of pornography, its impact on unit cohesion, and the formerly unrecognised obligation of commanders to monitor the latest trends in video filth? Major Boulton is all over that one, as she lays out in her report’s executive summary:

Today people are impacted by legacy cultural influences, such as patriarchal and hegemonic masculinity notions, which view women as lesser than and the opposite of men; furthermore, there are new cultural influences such as extreme pornography and demeaning depictions of women in video games and multimedia.

Collectively, these two formidable and immersive cultural influences create cognitive bias and prejudice. This can manifest through women’s voices being silenced or discredited, or their work and abilities being minimised. Being attuned to these dynamics can help Army leaders get the best out of individuals and teams, and allow the focus to remain on merit.

Major Boulton’s gender-centric take on the national defence can be read via this link, which leads to the Army’s official website,  or the one below. And if you appreciate the author’s take on gender, do stay tuned, because she is moving on to matters of earth-crushing relevance. As Canberra University’s Broad Agenda blog reports, her latest field of inquiry sees her

“presently undertaking a PhD on a part-time basis at the Australian National University, focused upon conceptualization of climate and environmental risks.”