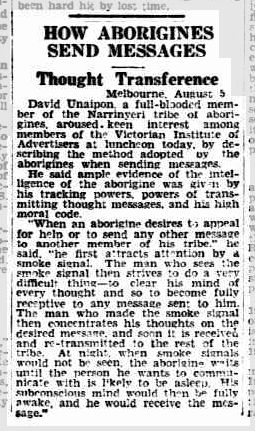 As reported in the Adelaide Advertiser on August 6, 1931

A quite remarkable story in The Weekend Australian by Indigenous Affairs editor Stephen Fitzpatrick informs us that Captain Cook did not discover the east coast of Australia, as is commonly believed — it was Aborigines who discovered him. Apparently the fires Cook observed from the Endeavour’s landfall until his departure from the coast were smoke signals relaying his progress from tribe to tribe as he made his way north. Let Chris Ingrey, chief executive of the La Perouse Local Aboriginal Land Council, explain how it was done:

“From what we understand, the use of fire was a signal up the coast and this was a method of signalling people that something was happening.

Readers inclined to scepticism will particularly appreciate the comments thread, which lends little credence to the tale of the original NBN, the Native Burning Network. Unlike the newspaper’s indigenous affairs roundsman, commenters remain caustically unconvinced.

And some might even wonder why fires were needed at all, given the 1931 explanation by David Unaipon, whose face graces our $50 bill. That’s his revelation in the screen grab atop this post, which can be read in full at Trove via this link or the one below.