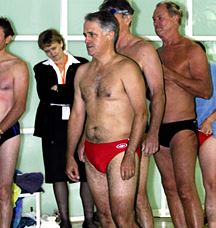 There is no reason whatsoever to suppose the following is true, but it is a rumour. By  the standards of modern journalism, as explored on Sunday by Insiders, that means it is solid enough to be given an airing. So here goes:

A prime ministerial adviser and one of the first hired after September’s coup, a certain Mr Vincent Woolcock, is said by some — can’t provide the gossips’ names or an appraisal of their veracity, of course — to be having an affair with our latest Prime Minister.

It is further rumoured — again, no names because, hey!, modern journalism — that  the adviser has been shopping for the perfect posing pouch, as his master’s red Speedos (above) are identical in every respect to the favoured cozzie of a former PM subjected to much ridicule for his taste in swimwear. One particularly telling example of that contempt for budgie-smugglers can be found in a 2010 Drum story. Do  make a point to note the byline.

There! That’s how you commit journalism these days, as Mrs Woolcock — aka opinionista and author Niki Savva — demonstrated with her true-or-not-I’ll-pass-it-on-anyway gossip-mongering to Barrie Cassidy and the ABC’s Sunday morning sofa set.

Funny thing, that. When Piers Ackerman mentioned rumours about then-PM Julia Gillard’s live-in boyfriend, the conservative columnist was bounced from the show and never invited back. But when Mrs Woolcock detailed her rumours, having pointedly neglected to contact the subjects of those whispers, all present had a jolly old time chewing them over.

For some reason (shame, perhaps?) Insiders does not provide a transcript of its panelist’s on-camera thoughts and observations, but those prepared to endure the spectacle of Mrs Woolcock in what is rumoured to be her re-cycled First Communion attire can follow the link below and begin watching modern journalism in action from about the five-minute mark.

Oh, and one other entirely unsubstantiated rumour: Host Cassidy’s disconcerting habit of addressing his guests while standing is a consequence of perpetually inflamed haemorrhoids. Could be true, so why not give give that scuttlebutt an airing as well?

UNSW must be
so very proud