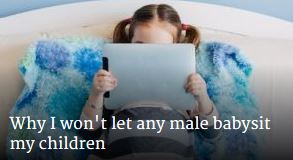 Remaining readers of the Age and Sydney Morning Herald might have noticed a change in emphasis of late on the homepages of those publications’ websites. All the oddities and bilge we have long come to expect of a news organisation captured long ago by the groupthink inner-city proclaimers of their own virtue are there — Peter Hartcher’s sonorous soporifics, Paul McGeough’s spittle-flecked re-workings of the latest Trump-o-phobic rantings from the New York Times and Washington Post, and all those economists and business writers who believe nothing boosts the prospects of a company, or a nation for that matter, than higher taxes and yet more regulation. All to be expected, of course.

What’s new, though, is the sites’ peculiar taste for promoting themes and stories that might better belong in New Idea or any other of the celebrity-encrusted women’s magazines — allowing, of course, that those publications were edited and read only by ladies of the aggrieved and forever irritable variety. For example, today’s Age homepage includes among its prime stories — the above-the-fold offerings that garner the most eyeballs and clicks — these gems:

What Helen Razer learnt going on 100 dates in a year

The third-wave feminist sensibility that seems to determine the placement and prominence of stories manifests itself most clearly in this appalling exercise in misandry:

Why I won’t let any male babysit my children

…group slumber parties are also out. When there is a group of excited children it is far too easy for one of them to be lured away by a father or older brother without being noticed.

When my daughter goes on play dates I make sure that she will be supervised by a woman at all times. So far she has only slept at one friend’s house. Beforehand I spoke to my friend about our rule and clarified that if she’s going to pop out to shops for example and intends to leave our daughter in the care of her husband or another man then the sleepover cannot happen.

Just imagine if a male writer had thundered his opposition to, say, allowing his children to travel in cars driven by women, as most seem not to know how to change a flat tyre and all might perish of thirst were that to happen on some sun-baked stretch of tarmac.

To demonstrate her case, Ms Edwards links to an Australian Institute of Family Srtudies summary of reports on the estimated incidence of child abuse. These numbers prompt her to observe

And here is another thing she might look at — a note at the tail of the very same ABS webpage she cites:

While Ms Edwards devotes much energy to maligning men, she might every so often take a break from her loathing to celebrate the good things in her life. Like Fairfax, for instance. If such an addled company did not exist, where else might she find a paying outlet for such pea-brained prejudice and paranoia?

The column can be read in full via the link below. As there is no advice to the contrary, men are allowed to read it unsupervised.

Smith back on air