They Aimed to Make History. They Got Kamala Harris 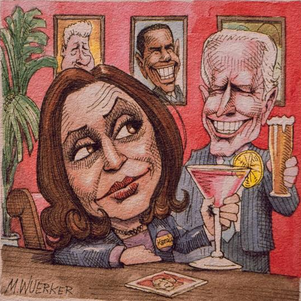 Exactly why anyone would want Kamala Harris is something of a mystery. She didn’t marry until she was just shy of her fiftieth birthday. It is, of course, barbarically sexist to comment on a successful woman’s romantic life (just ask Gladys), but in Harris’s case it’s relevant. She got her start in politics at the tender age of twenty-nine when her romantic partner at the time, the sixty-year-old speaker of the California state legislature, appointed her to a high-pay, low-work sinecure on the California Medical Assistance Commission. Nothing to see here; move along. Down with the Patriarchy.

After more than a decade in (appointed) government employment, Harris ran for and won the elected post of San Francisco District Attorney in 2004. Yes, America elects its local prosecutors (as well as its sheriffs, accountants and dog-catchers). In her first two years in office, Harris suspended the use of the death penalty for murder, created a special hate crimes unit, and offered convicted drug dealers the option to study for a degree instead of going to prison. When violent crime spiked, she switched to throwing offenders in jail—and throwing away the key.

Harris’s new “tough on crime” persona alienated progressives, but propelled her to state-level office. In 2010, she was elected California’s Attorney General with the endorsement of the state’s two long-time senators (Dianne Feinstein and Barbara Boxer) and her local very-long-time congresswoman (one Nancy Pelosi). With such powerful party stalwarts underwriting her campaign, Harris was able to win a whopping 33.6 per cent of the vote in the Democratic Party primary. Her six male opponents split the remaining two-thirds, leaving Harris in command of the field. Score: Harris 1, Patriarchy 0.

In the ensuing general election, the perennially successful Democratic candidate for everything, Jerry Brown, handily won the governor’s race with a 51–44 victory over the perennially unsuccessful Republican candidate for everything, Meg Whitman. Lower down the ticket, Harris snuck through with a plurality of 46.1 per cent, just pipping her (male) Republican opponent’s 45.3 per cent of the vote. Score: Harris 2, Patriarchy 0.

Now, in American elections, particularly at the state level, most people just pull a big lever that is labelled either “D” or “R”, without paying much attention to the actual names listed under each. In that 2010 California state election, the Democratic Party candidate for governor won by a margin of 1.3 million votes. The Democratic Party candidate for lieutenant governor won by 1.1 million. For secretary of state, by 1.4 million; for state controller, by 1.8 million; for state treasurer, by 2 million; for insurance commissioner, by 1.2 million. Harris won her election by a mere 74,453 votes. For anyone to even notice a down-ticket candidate like Harris was remarkable. That people disliked her enough to specifically vote against her in the midst of a Democratic Party landslide is truly astonishing.

In any well-functioning political party, that election squeaker would have been the end of Kamala Harris’s aspirations for higher office. Like the similarly-loathed Meg Whitman, she might have been made ambassador to Kenya. But Harris was destined (earmarked?) for bigger things. When Barbara Boxer retired from the Senate in 2016, Harris ran for her seat, receiving the endorsements of … Barack Obama, Joe Biden, Jerry Brown, Gavin Newsom, Barbara Boxer, Dianne Feinstein, Elizabeth Warren, Cory Booker, Emily’s List and the California Democratic Party itself (yes, in America the parties can officially endorse candidates for their own nominations). The only prominent Democrat who didn’t endorse her was Hillary Clinton. Eight years earlier, Harris had endorsed Obama for the nomination, and we all know who holds a grudge. It isn’t the Patriarchy.

With such high-calibre support, it’s no wonder that Harris won the primary election with a resounding plurality of 37.9 per cent of the vote. To be fair, the California primary system is complicated, and many of those who voted against Harris were actually Republicans. But “The Philistine” is a humour column, and it is under no obligation to be fair. Harris was hated all the way to Washington.

Simply put: no one likes Kamala Harris. No one even feels bad for not liking her. Her boss doesn’t like her; her aides don’t like her; even her Irish terrier doesn’t like her. Harris featured it (no one knows the sex) in a single 2018 Facebook post for National Puppy Day, calling the one-year-old her “office dog”, which implies that she never actually took it home. Now presumably five years old (and hopefully still alive), the dog was never seen or heard from again.

When the Democratic Party establishment united behind candidate Joe Biden in 2020, it wasn’t because they liked him, or thought that he would make a good president. It was to keep the insurgent but surging Bernie Sanders off the ticket and out of the White House. As the Philistines like to say, si cambia il maestro di cappella, ma la musica è sempre quella. Sanders had swept the first three primaries, and his only serious opponents were the “my two dads” McKinsey consultant Pete Buttigieg and a person named Amy Klobuchar. Scared to death that a socialist version of Donald Trump might sweep to power and drain their own particular corner of the swamp, the party elders (and in this case, that term is meant to be taken literally) cut a deal. They agreed to back Biden—but only if he would set up Harris as his successor.

By this point, Harris had already dropped out of the race. But she had been the only African-American woman in it, and there was no way the Democratic Party was going to run two white men at the top of the ticket in 2020. If Biden wanted the nomination, he would have to share it with a woman. But which woman? A Democratic Party grandee named Jim Clyburn saw his chance to answer that question, and he took it.

With Clyburn’s timely endorsement, Biden swept South Carolina, and one week later the rest of the South. Clyburn duly cashed his chits. He went on national television to urge Biden to select an African-American woman as his running mate, because “African-American women needed to be rewarded for their loyalty”. He might just as well have added “and because if you don’t, you’ll pay for it”. Of course, Biden chose Harris, and he’s been paying for it ever since.

That’s how the Democratic Party got a presidential candidate that few people wanted, paired with a vice-presidential candidate that nobody liked. Biden was simply the “candidate who could beat Trump”; there was no alternative. All of the other contenders—“Red” Bernie Sanders, Elizabeth “Pocahontas” Warren, Michael “Mini Mike” Bloomberg, Pete “Millennial Mayor” Buttigieg and Amy “Who?” Klobuchar—were fundamentally unelectable. The party faithful wanted a young, female (preferably non-binary) Person of Colour to wave their rainbow flag, but what the party establishment wanted most of all was to beat Donald Trump. The compromise solution was to keep Biden out of sight for a few years, then let him “make history” by resigning. That was the only way to give America the virtue signal it desperately needed but stubbornly refused to elect.

Sixty per cent of Americans think that Joe Biden is unfit to be president, and the other sixty per cent feel the same way about Donald Trump. But all 120 per cent loathe Kamala Harris. No matter; she’ll make double-history all the same. The 2024 election cycle will begin in earnest next March, and Kamala Harris will be running from the Oval Office. It’s no wonder that the Democrats are desperate to see Trump put safely behind bars before the race begins. Trump couldn’t beat an empty podium in today’s America, but he’ll trounce Kamala Harris. Score: Trump 2, Establishment 0.

13 thoughts on “They Aimed to Make History. They Got Kamala Harris”