The Misandry of a Feminist Utopia 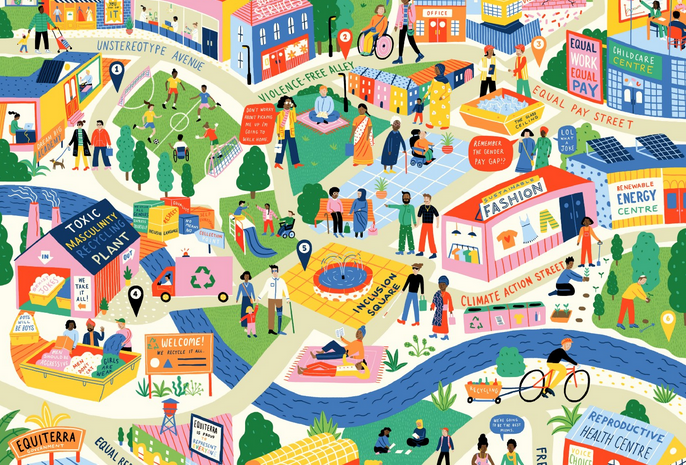 I want to tell you about a wonderful country that exists—where? Now shut your eyes and just try to guess when I tell you its name—oh, and if you’re wondering about the infantile language, that’s because that’s how they speak in—are you ready?—Equiterra. Yes, Equiterra, it means “equal” and “earth”, get it? All together now, E-qui-ter-ra. What a pretty name.

But where is it? You won’t find it in the atlas because Equiterra is an imaginary country. Yes, like in a fairy story, except that we don’t say that anymore because it might be hurtful to some of our friends who are differently preferenced gender-wise. Equiterra is a make-believe land in the minds of a gaggle of pushy women somehow connected with the United Nations, that admirable organisation that does such an invaluable job preserving world peace. They call themselves “UN Women Australia” and are obsessed by “gender”. (I mustn’t say “by sex”, must I? That would give the wrong impression.) Their raison d’être is “promoting women’s empowerment”, a mission in which, going by what we see around us, they are having more success than the United Nations is in its efforts to keep the world in tranquil harmony.

It all goes back twenty-five years to a “World Conference on Women” when “193 countries” signed what is picturesquely described as a “comprehensive global roadmap to destination ‘gender equality’”. Since then there “has been a lot of progress”—they can say that again, the way feminism has extended its clutches throughout the fabric of Western society—but “many of the promises are yet to be fulfilled”. Except of course in Equiterra.

As a step towards getting the promises fulfilled everywhere, these women decided to get you thinking the right way while you are young and indoctrinate you in their pet prejudice, which is basically that all white men are female-bashing misogynists. In this implementation of “gender equality”, everyone is happily and mathematically equal, though when you come to examine the small print you do get the impression that some citizens of Equiterra, especially women, the disabled, “trans” folk and “people of colour” are, in George Orwell’s phrase, more equal than others.

But how could this prejudice be most easily insinuated into your impressionable mind? Why, what better than in a fun way, by getting you to play with a jigsaw puzzle which tells you what you ought to think (no puzzle about that!). The jigsaw is called by the name of the country, yes, Equiterra. Ask mummy and daddy, or your two daddies or mummies, or one of either, whichever you have—it’s all the same in Equiterra—to buy it for you.

An English lady artist called Ruby Taylor, who among other things does whimsical labels for gin bottles—she is so talented—has painted a beautiful picture of Equiterra, reproduced atop this page. When you’ve pieced the jigsaw together you have a bird’s eye view of a busy city which, aesthetically, matches the cloying childishness of the language used to describe it. All the streets are laid out with names of the kind of things you need to learn. You can take a sightseeing stroll along Equal Pay Street for example, where you can admire a symbolic work of art in the form of a “smashed glass ceiling”. It’s there to show you that in Equiterra there are “no systemic barriers that hold women back”.

What do we mean by “systemic barriers”? We mean men hogging all the good jobs and ganging up to build glass ceilings that keep women imprisoned beneath them in domestic slavery doing “women’s work”. In Equiterra there “is no ‘women’s work’ or ‘men’s work’” and women “are encouraged to pursue careers across all sectors”. They “stay in the pipeline and become leaders across industries”. Doesn’t that sound nice? Because the main reason that in the nasty world outside Equiterra women don’t have time to become leaders is because they “do three times as much care and domestic work as men, with long-term consequences for their economic security”. Remember that next time you add to mummy’s workload by getting your clothes dirty. Better still, help mummy by telling daddy to wash them and leave mummy to study for her PhD.

You see, mummy might want to run an important corporation, and she has more chance of that in Equiterra than in the real world where, disgracefully, in 2019 “only 33” of some “500 companies were led by female CEOs”. Perish the thought that thirty-three might represent the total of women either capable of being CEOs of those companies or willing to do it. No, it’s patriarchal oppression pure and simple that stands in their way, keeping women chained to the kitchen sink. This certainly doesn’t happen in Equiterra, where “some of the most important institutions: government headquarters, leading businesses, and a major newspaper office and TV station” all have “gender balanced leadership” with “women and men of diversity working towards common goals”. Presumably the white male patriarchal oppressors, now dislodged, make the tea.

I bet you didn’t know that some “68 countries have laws that explicitly criminalise by law consensual sexual relations between partners of the same sex and in 11 of these such relations are punishable by death”. You learn that in Inclusion Square. Ruby and her coven refrain from saying whether those countries have anything like, you know, a culture or religion in common. That’s very polite of them, but why? Do you think it might be because they don’t want to criticise a culture or religion that, because it treats people such as Jews and Christians as enemies, is seen by gullible leftists as an ally against the “sexist” West?

“Freedom” in Equiterra “is one of the guiding principles of life”. That the conference that gave rise to all this took place in the bastion of liberty that is Beijing tells you quite a bit about the UN women’s notions of freedom. Equiterra has a Freedom Avenue. Quite possibly Beijing has too, though unlike Equiterra’s it’s unlikely to run to freedom of “expression and movement”, and certainly not, at least while the one-child movement prevailed, to “freedom to choose how many children you have and to have control over your own body”.

Talking of having control of your own body, “reproductive health” is all the rage in Equiterra, where among other benefits “comprehensive education about sexuality and sexual and reproductive health and rights is part of the school curricula and available to everyone”. This is in sad contrast to the benighted world beyond, where “190 million women of reproductive age worldwide did not have access to contraceptive methods in 2019”. Intolerable, isn’t it? Unless they’ve got hold of these methods since, they’ll keep on having babies, to the annoyance of infant-hating feminists and over-population cranks alike. They should of course be having abortions, but “unsafe abortion-related deaths are estimated to account for between 8 and 11 per cent of all maternal deaths”. No one in Equiterra would be stupid enough to suggest saving women’s lives by doing away with abortion. No, do away with the life of the infant by all means but make it nicely clinical and safe (except for the infant).

Let’s take a peep at Education Boulevard. Here we discover that girls in Equiterra “are taught science and math [sic] without the presumption that it’s not for them. Boys learn humanities and art and learn the importance of gender equality.” The authors fall short of recommending that boys also learn to dress up dolls but you can imagine they’d be very pleased if they did. Moreover, in Equiterra there’s “no such thing as child marriage that pulls girls out of school to become brides”. Now where does that happen? Once again, Equiterra’s creators coyly decline to say.

In Violence-Free Alley we learn that “domestic violence” in Equiterra has magically been almost eliminated. “Since gender equality is the norm, the power dynamics between intimate partners are not oppressive or toxic.” But it’s not only through power dynamics that this enviable result has been achieved. There’s also the fact that in Equiterra—every now and then the glint of the iron fist shows through the velvet glove of the UN women’s stiflingly sanctimonious prose—“there are strong laws against it”. Aah.

Since, as would now be obvious to a two-year-old, this is shameless leftist propaganda, it’s no surprise that climate is of great importance in Equiterra. So important that in Climate Action Street “there are no deniers of climate change”. Oh dear, that sounds sinister. Were they all shot? Is that the iron fist again? Still, just think how much better off we are without a lot of deplorables trying to stop public-spirited people like Extinction Rebellion shutting down the Western economy.

We haven’t time to visit Unstereotype Avenue (where people “root for [sic] the girl who wants to be a professional football player, not question her capabilities”) but before we go we mustn’t miss the jewel in Equiterra’s crown, the Toxic Masculinity Recycling Plant (that’s plant as in factory, not like the ones in your climate-compliant low-rainfall garden). Here “toxic behaviours are transformed into attitudes that perpetuate gender equality”. But isn’t that terribly difficult? Not in Equiterra, where “expectations such as, men and boys shouldn’t show emotion, or that they are naturally aggressive, have been transformed into healthier attitudes that respect every person’s right to live as their true self”. How amazing is that? And if “transformed” sounds like conversion therapy, don’t worry. That sort of thing isn’t illegal in Equiterra.

In the recycling process, “binary definitions of gender turn into a spectrum of gender identity and expression”, a consummation to gladden every gender-tinkerer’s heart. Then, with “oppressive gender roles” discarded like husks from the grain on the plant’s state-of-the-art conveyor belt, “people of Equiterra are not held back by dominant forms of masculinity, and they are happier and mentally healthier than any other society”.

Unfortunately though, the plant has already become redundant. Don’t tell Ruby and her friends, but apart from a few wimpy male “feminists” and representatives of “non-binary genders” the men have all fled (via Get Me Out of Here Station—public transport is “sustainable and safe” in Equiterra so there are fewer cars, nasty things that they are). They’ve gone to sane places in the outside world where men can live as they are and not as misandrist feminist fantasists would have them be.

5 thoughts on “The Misandry of a Feminist Utopia”

Moderate Muslims Are the Problem, Not the Solution

The High Costs of Fatherlessness