It was once quite a challenge to be controversial. During the blood-soaked Dark Ages, for example, any ruler without a triple-figure kill count to his name would have been written off as an also-ran.

It was almost as difficult to stand out in the Wild West, where murders were daily events. Even judicial executions in error drew little notice. The saddest grave marker in Tombstone, Arizona’s Boot Hill cemetery simply reads: “Here lies George Johnson hanged by mistake 1882. He was right we was wrong. But we strung him up and now he’s gone.”

Your various punk bands, the Sex Pistols and their kind, mined controversy throughout the 1970s and 1980s as a basic publicity device. Unfortunately for the Pistols, their most headline-winning moment was the 1979 heroin overdose of bassist Sid Vicious. It’s difficult to cash in on controversy when you’re dead.

Locally, things began to shift a little on the controversy front around the mid-1990s—possibly due to the election in 1996 of John Howard following thirteen years of Labor rule. At the time of Howard’s victory, no Australian voter younger than thirty-two had ever participated in an election that wasn’t won by either Bob Hawke or Paul Keating.

Labor was, it now seems astonishing to say, Australia’s default party of government. The party of permanence. So, particularly for our cultural gatekeepers in the media, Keating’s defeat was psychologically wrenching. “Can anyone imagine little Johnny Howard as Prime Minister?” perennial ABC identity Wendy Harmer asked before polling day, plainly unable to conceive of an Australia led by the then-member for Bennelong.

To normal people, Howard seemed, well, normal. To the Left, he appeared frightening. Even Howard’s mildest remarks drew censure and alarm. When Howard told Four Corners he wanted to make Australians feel “comfortable and relaxed”, interviewer Liz Jackson was appalled. “Do you think,” she asked, “that’s a dynamic enough vision to inspire Australians as they move into the next millennium?”

Inoffensive opinions and attitudes, if voiced by Howard and other Coalition figures, suddenly became controversial—especially in media circles. The fact that “comfortable and relaxed” resonated with so many voters likewise distressed our leftist friends. How could their fellow citizens be so brutish? How could they actually desire, of all base cravings, comfort and relaxation?

Interestingly, in 2016 Malcolm Turnbull campaigned on the exact opposite of Howard’s 1996 theme. Australia’s most maladroit prime minister endlessly promised “innovation and excitement”, failing to intuit that most people much prefer their lives to be reliable and predictable. “Excitement” implies risk. Risk requires a certain level of economic insulation.

Turnbull was essentially campaigning for his own elite class. Outcome: all the gains made by Tony Abbott in 2013 were erased. Turnbull and the Coalition barely scraped back into office in 2016 by an exciting margin of one.

The threshold for controversy continued to fall during Howard’s reign. When he announced, in 2001, that “we will decide who comes to this country and the circumstances in which they come”, media types were aghast. (Older members of that cohort had attempted in 1974 to run Frank Sinatra out of the country for comments about female journalists. Journalists were in the business of deciding immigration “circumstances” long before Howard was in office.)

Howard’s defeat in 2007 coincided with the first wave of full-blown climate-change mania, by which time it had become all but blasphemous to question global warming. Around then, I was approached at some awards night or other by a nervous female reporter who asked, as though addressing a Middle Ages heretic: “Is it true that you don’t believe in climate change?”

Of course, in those distant times it was still acceptable to believe in biological differences between men and women. That, too, is now shifting—and fast. Just three years ago, conservative US writer Dennis Prager was mocked by leftist television host Bill Maher and his leftist guests for asserting that activists were pushing a line that men can menstruate.

“Check it out, folks,” Prager said, to disbelieving laughter. “Anyone who says men cannot menstruate is considered transphobic.” That view is now widespread. Just type “can men menstruate” into Google and marvel at screen after screen of positive responses: “Having a period is not a feminine thing, and people of all genders menstruate, including non-binary people, agender people and even plenty of men!”; “Yes, Men Can Have Periods and We Need to Talk About Them”; “Can men menstruate? Yes, they can.”

In 1978, feminist Gloria Steinem wrote a satirical essay on the concept of menstruating men: “What would happen, for instance, if suddenly, magically, men could menstruate … menstruation would become an enviable, boast-worthy, masculine event.” It took a few years, but we’ve reached that magical moment. Steinem’s joke is now reality, after a fashion.

To be controversial in 2022, merely say this: men can’t menstruate. That’s how easy it is. Those wishing to dodge controversy instead use woman-avoiding phrases such as “people who menstruate”, which was memorably mocked by J.K. Rowling. “I’m sure there used to be a word for those people,” the Harry Potter author wrote online two years ago. “Someone help me out. Wumben? Wimpund? Woomud?”

For that, Rowling was condemned and shunned. She was even cut from this year’s documentary celebrating the twentieth anniversary of the first Harry Potter movie, appearing for just thirty seconds in clips filmed back in 2019. In February, the New York Times ran a bewildering ad featuring someone “imagining Harry Potter without its creator”.

Given that the ad ran in New York’s subways, most of the people seeing it were probably trying to imagine making it to their station without being stabbed. Or possibly they were imagining a better life outside of New York; more than 330,000 people left the city during the first year of the pandemic, driven away by rising crime and oppressive Covid policies. New York has bigger things to worry about than some British writer’s wizard book.

Politicians who say things calculated not to offend are often said to be using “motherhood statements”. But even motherhood is now controversial. In Sydney this year, a number of pre-schools held “parents’ day” parties instead of celebrating Mother’s Day. That’s where we are in 2022: motherhood is considered so divisive and offensive that it must not be mentioned.

A reader challenge: identify the next subject that will be deemed controversial. We’re already at motherhood. What might be next? 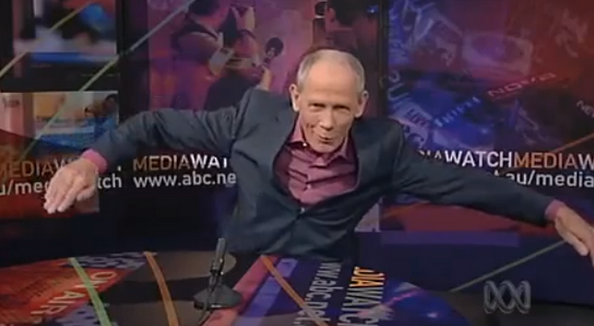 A NUMBER of ageing former ABC functionaries have now banded together in a group called ABC Alumni, a term more often associated with education facilities. As readers will be aware, the ABC is instead a re-education facility dedicated to correcting Australian wrongthink.

And that’s exactly the mission of Kerry O’Brien, Quentin Dempster, Maxine McKew, Jonathan Holmes and their Alumni comrades. “We are a united group of former ABC employees mobilising their skills to help save the ABC,” the Alumni declare at their website, “at a time when it is under sustained attack though [sic] funding cuts, job losses and political pressure.”

Funding cuts? Seriously? The Australian recently reported that the “ABC’s spending on advertising, promotions and audience research has soared to $289,000 a week—an increase of 46 per cent”. That works out to more than $15 million per year, which sounds like a lot until you realise it’s not even 1.4 per cent of the ABC’s annual budget.

As a point of comparison, $15 million to the ABC is equivalent to $1237 for an average Australian wage earner. They’re rolling in cash and crying poor at the same time.

As you’d expect, the Alumni make all the standard ABC claims about “independent broadcasting” and “Australian democracy”. Translated, these phrases mean “left-wing broadcasting” and “making people pay for something they don’t watch, listen to or agree with”.

Demonstrating their “independence”, members of the Alumni have campaigned during the federal election for teal climate candidates Allegra Spender and ex-ABC foreign correspondent Zoe Daniel, and formed an alliance with the far-Left mob GetUp. Independence only works in one direction at the ABC.

They think rather a lot of themselves, these Alumni folk. According to former Media Watch presenter Holmes: “Mostly our strategy is to provide a bit of star power and clout.” That’s a mighty big call from someone who hasn’t been on television for nine years and was barely on it in the first place. “Star” is not really a word you’d apply to a bloke who can walk around Sydney all day and not be recognised anywhere outside of a certain Ultimo foyer.

Even creepier than their claims of funding cuts and political independence is this Alumni revelation: “We also train and mentor current ABC staff, and organise social and other events to harness our collective knowledge and experience.”

Put aside this news that ABC oldsters are indoctrinating younger ABC staff—who are pre-indoctrinated in any case—and consider the horror that would be “social and other events” organised by the likes of Holmes, O’Brien, McKew and Dempster.

You’d rather be electrocuted.

The Cardinal Rule of Port-Canted Justice

Revenge of the Gutted Bunny