Dickens on the Yarra 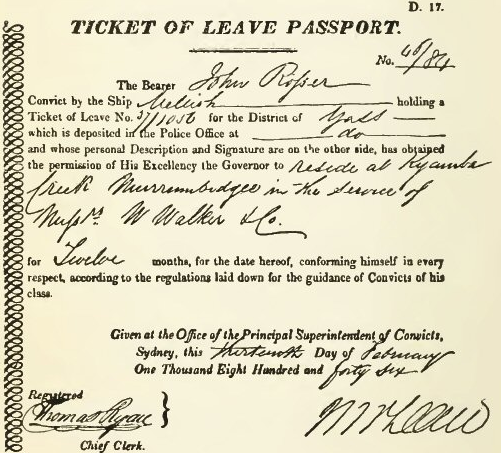 In 1839 an Old Bailey judge sentenced eleven-year-old Ellen Miles to transportation for passing a counterfeit coin. She had prior convictions and was from a “notorious family of utterers”. One reason for bunging her off to Van Diemen’s Land was that her mother had died and her father wanted to be free of the upkeep of his three daughters.

Ellen died, aged eighty-nine, in the Ballarat Benevolent Asylum (a battlers’ nursing home of the day) in 1916, not so far from living memory, one of the last of the 162,000 convicts transported to Australia between 1788 and 1868. She sounds like a character from Dickens. One of the most fascinating sections of Janet McCalman’s Vandemonians is how London scapegraces reproduced the world of Oliver Twist in gold-rush Melbourne when their sentences expired and they crossed Bass Strait.

“Vandemonian” was the slang for ex-convicts from Van Diemen’s Land when they moved on to a new life in Victoria, where they were not popular. Those from Dickens’s London were over-represented among the brothel keepers, girls on the town, counterfeiters, petty criminals, 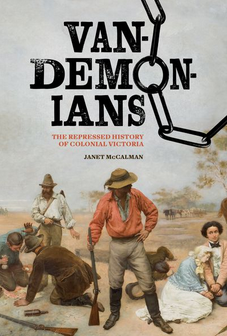 drunkards and other disreputables of Bourke, Steven (now Exhibition) and Lonsdale streets.

Convicts often reproduced their earlier life in exile. Londoners went to Melbourne and tended to have the least respectable but also unhealthy and short lives. Those from the industrial north of England did best in the goldfields, though quite a few dodgy Londoners traded there. Convicts with rural backgrounds, including those from the 1840s Irish famine, usually had healthier, longer, less troubled lives. Those with the most troubled lives here, however, were from port towns of the British Isles other than London, judging by criteria such as length of life, family stability and trouble with the law.

Vandemonians draws much of its material from the Ship Project, a part-voluntary research team looking at the lives of a sample of convicts who arrived in Van Diemen’s Land in the 1830s and 1840s, but especially the deluge that came after transportation to New South Wales ended in 1840.

Research workers were able to trace lives from before conviction through to, for example, grandsons serving in the First AIF. Court, shipping and probate records and death certificates were among the sources. Modern digital research aids, especially the tool for detailed searching of old newspapers, were also indispensable.

As in New South Wales, earlier convicts in a less crowded system seemed to do better after release. Nevertheless, 1840s men usually did better in Victoria than they might have done at home. With women it was more mixed; life in a tempestuous new colony with limited welfare and medical knowledge could be tough for a woman without a dependable husband, especially if she was pregnant or there were children. Selling her body could be the only way to survive.

McCalman on balance gives the convict transportation system a tick. The voyage out could be a positive, with a more orderly life, better food and warmer climate. There would be classes on reading and writing. On arrival, for a sensibly behaved convict, hard work in the open air of the island colony with a good employer could be quite reformative. Methodism fitted well for quite a few and the next generation produced a couple of ministers. But there were many bad experiences too and many convicts had been irreparably psychologically damaged much earlier.

McCalman says Collingwood in inner Melbourne, which is still today shaking off its tough reputation, was “Vandemonian central”, where they clustered in three-room cottages on damp ground. Cheap housing, but probate papers show the manual workers could pay them off and often own one or two more for their old age and their descendants.

There were a few startling success stories too. Notable Melburnians with Vandemonian forebears included the Boyd artistic family and the 1960s Labor leader Arthur Calwell.

She quotes an estimated 30,000 of the Tasmanian convicts as moving to Victoria, two-thirds of them men. Nearly half of the approximately 75,000 people in Victoria at separation in 1851 were estimated to have had links with the convict system (prisoner, guard or employer). Up to 10 per cent of the half million or so Victorians in 1860 would have had some convict connection. This was much less than the proportion in New South Wales and Tasmania, but still a lot.

Another figure she quotes is that about 2000 of the Vandemonian men and 200 women in Victoria brushed with the law. Many also were charged with public drunkenness and other petty offences. Allowing for a few more uncounted troubled souls, it leaves at least 25,000 old lags from across Bass Strait as leading fairly conventional quiet Australian lives in Victoria, poor or otherwise.

McCalman concentrates excessively on inner Melbourne and the goldfields, on the rich and poor. Ex-convicts have usually been portrayed as the shearers, bullockies and station hands of the day; mainland squatters often recruited them. But McCalman hardly mentions them. Vandemonian bush publicans, storekeepers and shoe repairers do better, but their mention in this book is brief.

McCalman veers towards wokeness on women, Aborigines and the environment and her distaste for productive industry, but Vandemonians is nevertheless a good, important, briskly written book, filling gaps in Australian history. Written history has been good on the arrival of the convicts, which is well and conveniently recorded, but has mostly forgotten them once they were freed and harder to trace, even though they dominated the pioneer population.

But neither this story nor any other in Australian history has been “repressed”, as MUP fashionably claims on the cover. Some just takes a lot of work to find and shape.

Excessive alcohol seems to have been a major cause of anti-social convict behaviour. It was mostly spirits and much of it of decidedly doubtful quality. Ellen Miles might have had a long, if at times hard, life because she was not a big drinker. It is no surprise that when Victorian society settled down after about 1870, it turned notably to “wowserism” about alcohol, a strict view of stable family life and a bit more religion.

Robert Murray is a frequent contributor on history

The Other by Ryszard Kapuscinski

The Monster of Florence