The Pro-China Firebrand at the ‘Lancet’ 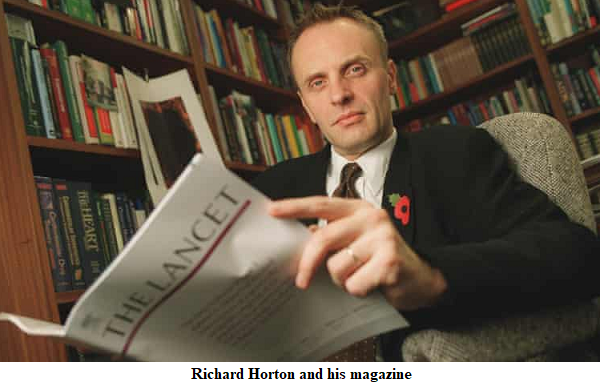 “A dangerous myth has been cloaked around the young body of global health. It is a myth that hides uncomfortable truths about inequalities of power. It is a deception that erases important histories, marginalises already neglected peoples, and prevents accurate understanding of why progress towards sustainable health improvements in some of the most resource-poor settings is so slow and erratic.” Is the author perhaps a junior professor of sociology or English trying to master the use of academic conjuring words like “marginalise” and “sustainable”? No, the author is Richard Horton, editor of one of the world’s foremost medical journals, the Lancet, discussing “Frantz Fanon and the Origins of Global Health”.

Do not be surprised if you find in the Lancet these days an editorial framed in the standard idiom of social justice. In the example at hand, Horton dismisses the “dangerous myth” that the ideal of global health traces back to anything other than the struggle against colonialism, identifies “forces inimical to health”, and finally eulogises the author of “the first manifestoes” on the topic of the health of the world’s people: the psychiatrist Frantz Fanon. While Horton decries oppression and honours Fanon as a founder of the concept of global health, he doesn’t mention Fanon’s celebrated theory that the exercise of violence is itself profoundly healthful for the oppressed. “At the individual level,” declares Fanon in The Wretched of the Earth, “violence is a cleansing force. It rids the colonised of their inferiority complex, of their passive and despairing attitude. It emboldens them and restores their self-confidence.” Evidently the editor of the Lancet was reluctant to indulge his hatred of colonialism and his love of provocation to the point of romanticising the act of killing.

In general, Horton finds no conflict between incendiarism and editing a medical journal. As he has made clear in interviews, he believes the two go hand in hand and takes pride in offending those who think otherwise. “I feel very strongly that we should be using the Lancet as a platform for advocacy,” he said recently. “There’s not much point in publishing science unless you do something with it.” Of course, by advocacy Horton doesn’t mean the advocacy of just anything, and by doing something he doesn’t mean doing just anything. He means crusading on behalf of a new world order overseen by persons like himself. Possessed of a neo-Marxist mentality, he deals in accusation and prophecy, and looks forward to the day when history transcends and overcomes the sovereignty of Western nations. In the meantime he mounts his soapbox to extol one of the founders of global health while muting this figure’s famous idealisation of violence as an instrument of health.

In the midst of the Covid crisis, Horton issued a diatribe similar in spirit to his eulogy of Fanon, now focused on the pandemic and expanded to the length of a short book: The COVID-19 Catastrophe: What’s Gone Wrong and How to Stop it Happening Again. While Covid’s differential impact on the poor and minorities supports his indictment of inequality, the emphasis of the book falls not so much on the human costs of the pandemic as on its mismanagement by the authorities in Western democracies—a tale of all but criminal irresponsibility, in his telling. According to Horton, Covid became a catastrophe not because of the pathogen’s lethality per se but because of the denial of its lethality by persons in high places, the unpreparedness of Western states, and their neglect and betrayal of the ideal (or as he puts it at one point, the “story”) of globalism. Only after bitterly indicting Western authorities for their mishandling of Covid does Horton make clear just how much about the virus remained unknown as he penned the indictment itself.

In all, Horton believes the West’s bumbling response to Covid compares shamefully with the swift, effectual measures taken in China—a record of honour marred only by the muzzling and humiliation of the ophthalmologist in Wuhan who first reported the new virus. When Horton quotes approvingly the claim that Covid has undermined trust in “governments” and exposed their “impotence”, he tacitly but emphatically excludes the government of China from this damning assessment. And while he does print in full a desperate appeal from an anonymous Chinese correspondent on behalf of those badly hurt by anti-Covid measures imposed from above, he follows it with his own shining endorsement of Chinese “policymakers”.

Western democracy not only looks bad in Horton’s pages, it seems to lose its very legitimacy. Astonishingly, Horton agrees in passing with the description of life in an affluent democratic society as “servitude” and exhorts his readers one and all to “work hard to cultivate our sensibility for intolerance”, an imperative that cannot be reconciled with democracy. But China receives Horton’s heartfelt affirmation. He quotes in all seriousness the World Health Organisation’s fulsome praise of “the deep commitment of the Chinese people to collective action in the face of this common threat [of COVID-19]”.

“The deep commitment of the Chinese people”: here is the authentic voice of propaganda. As everyone knows or ought to know, the containment measures adopted in China in response to COVID-19 were mandated by the Communist Party, exercising its formidable police powers. At this point in his polemic, Horton, fearless speaker of truth to power, becomes an apologist for a one-party state. Why does he seem to have a soft spot for China? Perhaps because China, like Fanon’s Africa, was once subjected to colonial power. Putting himself “in the position of Chinese policymakers”, he notes that “after a century of humiliation at the hands of a colonially minded West, China, proud of its 5000-year-old civilisation, finally achieved independence in 1949. The country grew erratically and with terrifying mistakes under Mao Zedong, but he at least succeeded in establishing secure national borders.” Just as Horton’s tone of accusation disappears before the concerted power of the Chinese Communist Party, so his explicit disdain of the nation-state and his proclamation that “sovereignty is dead” give way to a defence of the nation of China, secure within its borders.

In Horton’s view, it seems China as a whole underwent a Fanonian transformation as it passed from colonial subjection to the self-confidence of a nation that knows its own power. China too has overcome its historical inferiority complex and found its strength and voice. What explains its emergence? In Horton’s telling, China’s rise to power is predicated squarely on “the territorial independence and integrity won by Mao”. Thus, the very sovereignty that Horton judges a fallacy and a danger in Western nations constitutes in China an asset so precious that it offsets, somehow, “terrifying mistakes”. Note that while Horton may or may not impute the “mistakes” of the Mao era to Mao, he does credit Mao with a historic achievement that seems to mitigate them, whatever they are.

What are they? Presumably the mistakes include Mao’s imposition on China of a murderous famine, under the name of the Great Leap Forward (1958 to 1962), that ranks among the darkest episodes in human history. Whereas the salubrious nature of violence works “at the individual level” to transform the oppressed into self-confident agents according to Horton’s hero Fanon, the cataclysm of the Great Leap Forward represents, so Horton implies, a sort of by-product of the process that enabled a once-backward China to become the power it now is: one confident enough to act with dispatch when COVID-19 made its appearance, thus preventing a potential catastrophe from blowing up into an actual one. In particular, Horton’s China is now confident enough to learn from its own mismanagement of the SARS outbreak of 2003 and avoid the same missteps the second time around—not that it lost legitimacy in Horton’s eyes by bungling its response to SARS. But if the Chinese policy of suppressing information about SARS in 2003 constitutes a mistake, who would put orchestrating a massive famine in the same category?

Bear in mind the magnitude of the “terrifying mistakes” Horton does not specify. The fact is that while no one can say with any certainty how many died at Mao’s hands, the total appears to be about 40 million (mostly but not exclusively during the Great Leap Forward), making him one of a sanguinary century’s worst butchers. If, as Horton argues, Donald Trump should be prosecuted for crimes against humanity for shutting off US funding of the WHO, then what about a man responsible for the murder—knowing and intentional, not inadvertent—of tens of millions of his fellows? Why is Trump’s action a crime but a famine authored by Mao a misstep?

Just as Horton plays with fire by making a hero of Fanon, he floats the opinion that we are all communists now but not that kind of communist, that we must strive to become more intolerant but only in the most humane sense, that Mao enabled the rise of China despite certain “mistakes” made “under” him. This sort of incendiary play with words clearly does not comport with the ethos of medicine. Horton’s use of Covid to delegitimise Western democracies (because they failed their first responsibility), even as he paints a one-party state as a model of civic responsibility, represents an act of great hubris.

Perhaps the root of the problem is that Horton as an editorialist thinks not like a doctor but an ideologue, reiterating fixed ideas, glorifying on the one hand and vilifying on the other, gravitating towards utopia like a Marxist of old predicting or decreeing the future. At all times he uses his medical identity to accredit political judgments, as if disputing the latter were tantamount to denying medical knowledge. The shoemaker was told to stick to his last. Maybe it would be better for all concerned if Horton resigned his position as prosecutor of the Western world and stuck to medicine.

Stewart Justman lives in Montana. A prolific writer, he is the author of The Nocebo Effect: Overdiagnosis and Its Costs (2015).

The Infodemic and the Rise of a Modern Inquisition