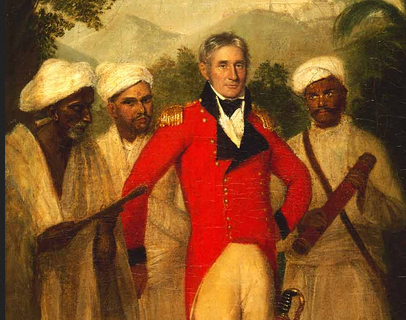 Since late 2018 there has been a particularly pernicious myth circulating around the internet that Britain, during its reign over India, extracted $45 trillion from the subcontinent. The enormity of the figure is most likely the reason for its popularity: it provides a swift and easy indictment of the British in India for those who know very little history—after all, nothing good they did could hope to measure up against $45 trillion. The figure was “calculated” by Marxist economist Utsa Patnaik but was popularised by Jason Hickel (self-described anti-capitalist) in an Al-Jazeera article. And since then, it has spread: search ‘$45 trillion’ on Google and you get more than three million results ranging from articles published by news outlets like VICE to videos of India’s Minister of External Affairs referencing it. The figure has gone far beyond Marxist circles and has slowly percolated into Hindu nationalist circles (this synergy between Marxist and nationalist thought is no accident and has a long tradition in Indian history, where the two sides compete to paint the British Raj in the most negative light possible). The fact that it can now also be found in popular histories (such as Sathnam Sanghera’s Empireland) and supposedly academic works (such as Priya Satia’s Time’s Monster) only serves to exemplify both the extent of Marxist influence in academia, and the complete disregard for scientific rigour that typifies modern academics.

There’s just one problem: it’s utter nonsense. It’s not even new nonsense. Indian nationalists like Lala Lajpat Rai, Romesh Chunder Dutt and Dadabhai Naoroji dedicated lengthy books attempting to quantify the amount Britain had “drained” from India and were rebutted by British (so-called “imperialist”) economists like Vera Anstey and Theodore Morison. This is a continuation of that tradition. The thrust of the nationalists’ argument was this nebulous, ill-defined and ever-changing concept of “drain” from which much nationalist sentiment drew legitimacy. The “drain” was many things, but usually consisted of the following: British officials and their (allegedly) exorbitant salaries, the subsidised imports of goods to Britain, the cost of pensions paid to retired British officials, the price of interest on the public debt of India, repatriated business profits, railway guarantees and the cost of maintaining a standing army. Even accepting the premise that all of these were indeed a drain, the magnitude did not exceed 0.5 per cent of India’s national income—a tiny percentage (“insignificant” in the words of the economist K.N. Chaudhuri) that generated controversy, and continues to do so, for political, not economic, reasons. What could be more comforting than blaming a foreign nation for all your problems?

Patnaik departs from the likes of Naoroji, Rai and Dutt in that instead of calculating the normal figure, she decides to compound it at 5 per cent annual interest right up until 2016. The choice of interest rate outstrips the modern economic growth rate which “greatly exaggerate[s] the magnitude of the drain” as the historian Clive Dewey puts it. In addition, the assumption that an investment would provide such returns is unlikely and unprovable. If such returns could be guaranteed, then Britain’s drain fails in comparison to the drain caused by some lowly thief in the early Mauryan empire who stole a loaf of bread: assuming he stole the equivalent of two pounds, he has robbed some poor sod’s family of a figure so obscenely large, it outstrips the combined GDP of every country on Earth! Such is sufficient to demonstrate the folly of compound interest applied over large periods: indeed, both Patnaik’s figure and the figure of our ancient Mauryan thief will continue to grow exponentially, racing beyond the combined wealth of every country on earth and on towards infinity. And all of this is by design: she wants us to believe that this is the true wealth of a counterfactual, uncolonised India.

This is not the only flaw in Patnaik’s method, but perhaps the most egregious one. Breaking down the items that constitute the “drain” is instructive to demonstrate a few others: the public debt, for instance, was composed of interest paid on loans for railways, roads and irrigation networks, where the money was borrowed from London. These were enterprises that were resoundingly to India’s benefit and generated significant employment in India. They cannot be considered a drain: if anything, they should be considered the opposite, as India got to borrow capital at much lower interest rates thanks to its position in the empire—Niall Ferguson terms this phenomenon “the Empire Effect”.

The other items in the public debt include the cost of the 1857 mutiny and the losses incurred by wars waged by the East India Company in order to consolidate power over India. Neither was a drain: it is only natural that India would pay for its own civil “war”, as America did for its, and the wars waged by the company revitalised trade connections to the interior that had not been seen since the fall of the Mughal empire. With that the vast majority of the drain has been knocked out—debt constituted most of the “drain”, as Patnaik herself points out in a later article in the Monthly Review, a Marxist magazine. In this article she also redoes her calculations, compounding up to 2020 instead of 2016: lo and behold, Britain has stolen an extra $19 trillion in the interim, thanks to the magic of compound interest, bringing the figure up to $64 trillion.

The “exorbitant” salaries were nothing of the sort in an Indian context. The previous Mughal elite had delighted in extracting far greater proportionate wages and handed over 82 per cent of the empire’s entire budget to a few thousand people, with the emperor in some estimations pocketing as much as 25 per cent of total revenue. The viceroy’s salary (which Britain paid for after 1919 anyway) never came close to this, and the pensions of the Indian Civil Service seem like pennies in comparison. These men were providing a service to India, and getting paid for it in return—which is less like a drain and more like a regular market transaction. A study by the economist Patricia Jones on this topic, published in the Journal of Comparative Economics, largely confirms this view: she finds that colonies with better-paid governors “developed better institutions (and became wealthier)”.

The army is perhaps the most ridiculous item on Patnaik’s list. Every nation maintains an army, and India was no exception. What was exceptional is that Britain paid for extra expenditure incurred when Indian troops were deployed abroad (unless it was in India’s interest, such as defending its frontiers) and that India never needed to maintain a navy because Britain provided the services of the Royal Navy at next to no cost. India was unexceptional in terms of per capita military expenditure, and experience before and after the colonial state do not suggest it would have spent less without British presence. This is to say nothing of the fact that the army protected the British Empire, upon which numerous Indian merchants’ businesses depended.

Repatriated business profits, an eternal bane for many post-colonial nations, provided precious employment to millions of Indians and generated incomes in India that would have not been created otherwise. And railway guarantees, frequently bemoaned as evil by Indian nationalists, were vital in attracting foreign investment (something India keenly craves today) to create the vast railway network in India that ended peacetime famine and facilitated large volumes of trade, both internally and internationally (the historian Zareer Masani has pointed out that the guarantee was much lower relative to Brazil and Argentina, who had similarly challenging terrain).

That leaves us with the subsidised imports of goods, which requires some explanation. From 1757 to 1784 a small number of officers in Bengal used tax revenue to buy Indian goods (mainly textiles) for export. It was of little difference to the average person whether money would be spent by landlords (who paid the tax) or used to purchase goods for export, as in neither case would they consume it. This process is largely similar to that of most empires in India’s history, although on a smaller scale. Yet it can still be said to be, in some sense, a drain. For a short, thirty-year period a small amount of Bengal’s tax revenue was siphoned off to pay for exports to Britain—and this small amount (vastly outweighed by British capital investment in India) is the true extent of the drain.

So there you have it: the $45 trillion lie. It speaks to a deep insecurity among certain Marxist and nationalist scholars for whom the “drain” serves not only as a scapegoat to justify India’s post-colonial failings (as Priya Satia does), but also as a tool to legitimise reparation claims. The reality of the “drain” was, and always will be, political and malicious. We should be sceptical of all those who peddle it.

Hira Jungkow is a student based in the UK who writes about history and economics. He writes on Twitter as @HiraJungkow

2 thoughts on “British India and the $45-Trillion Lie”

Would John Locke Take the Jab?