Digging for a Timeless Treasure 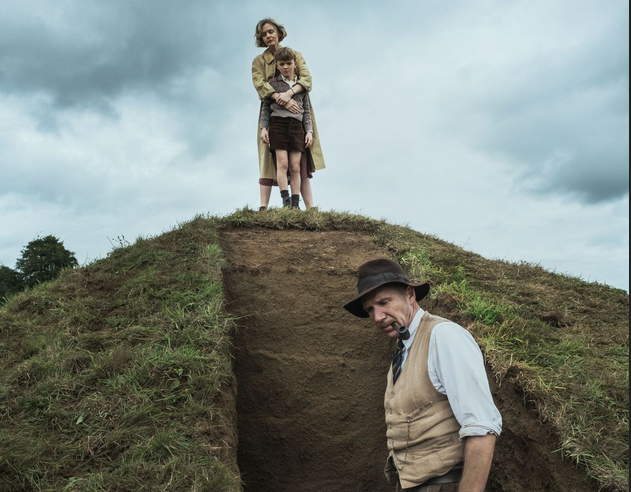 Is Covid life getting too much for you? Is the Biden presidency slowly wearing you down? Do you feel like a change of pace, a movement back to normality, not Joe’s executive-order sort of normality but real normality? Do you cherish the idea of everyone just getting on with their lives, simply being themselves in spite of living in the most troubling of times?

If so, then it’s time to watch The Dig, a two-hour film released in January on Netflix, and take yourself away to Sutton Hoo in Suffolk in 1939 for a breather. Yes, that’s right, in 1939, as Hitler prepares to attack England and the world political scene is looking grim, a man and a woman who are worlds apart in background and social status but who share a passion for archaeology are discussing opening up some ancient barrow tombs on England’s eastern coast.

She is Edith Pretty, the wealthy widow of a colonel, living with her staff in the fifteen-room mansion built on the land she owns known as Sutton Hoo Barrows Fields, where ancient burial mounds going as far back as the Neolithic have been thoroughly looted for treasure since at least the time of Henry VIII’s visit to view them and pick up any treasure he might find. Edith Pretty is bringing up her young son alone, missing her husband, wistfully visiting his grave, a woman imbued with a sense of the impermanence of life in general and her own life in particular, as she is in frail health. She is feeling a need to reach back to the past, to the ancient barrows on her land, as she senses their call for her to open at least one before army tank manoeuvres on this wide field somehow desecrate them. She’s fascinated by Egyptology and spiritualism, by the archaeologist Howard Carter’s discovery in 1922 of the fabulous treasure in Tutankhamun’s tomb in the Valley of the Kings and now by the cry to eternity she hears coming from her land.

He is Basil Brown, of thoroughly yeoman stock, a humble agricultural man of the Suffolk earth, who left school aged twelve and was taught by his father everything there was to know about Suffolk’s soil. Now around sixty, Basil is an “excavator” as he terms himself, who helps out the local Ipswich Museum with some archaeological digs. He’s a dour, self-taught archaeologist, putting his knowledge of soil to good use in identifying the strata in digs, and an amateur astronomer as well. Mrs Pretty is paying him to carry out some archaeological work for her on her barrows, and Mr Brown, whom we find out later is backed by a shrewd and admirable wife, is angling firmly for a higher rate of pay, which he gets, in his dignified countryman’s way, once he starts to walk away from the job disgruntled at being offered too little.

Sutton Hoo, as any student of Anglo-Saxon history will tell you, and as many others will as well, was the site of one of the most significant British archaeological discoveries of modern times, and it was made in 1939 purely by Mrs Pretty’s eccentric decision to start a dig there. It was also made by Mr Brown’s competence in finally choosing, after a couple of false starts on plundered mounds, a large mound thought to be empty, where plunderers had stopped only halfway down.

A fabulous treasure of Anglo-Saxon artefacts still awaited finding in this mound by the painstaking Mr Brown. After being half-suffocated when his trench fell in on him, he revealed this treasure deposited in a collapsed burial chamber that was on board the remains of a ribbed wooden ship eighty-eight feet long. The ship is now thought to have been the Heroic Age burial mound of seventh-century King Raedwald of East Anglia, a pagan with Christian leanings, as shown by his treasure of 263 items which included Chi Rho Christian silver spoons and other Christian Byzantine imports. Raedwald was also being sent on his way to Valhalla with a fine supply of home-produced goods such as buckles, a magnificent sword, sceptres and rods, all illustrating his kingly power and international influence.

Mrs Pretty did indeed have a treasure in her own Valley of the Kings. This hoard was to rewrite the history books concerning Anglo-Saxon polities, metal-working, religion and trading links, and it is still doing so. The most famous piece of the hoard is a ceremonial helmet, which recent scholarship shows can turn its wearer into Odin, for it is so designed that one eyebrow glints in the firelight, but the other does not, leaving only a dark hole, thus representing the one-eyed god.

The rich widow and the poor yeoman part of this story is a true one. There was a Mrs Pretty, there was a Mr Brown, and they did discover the treasure. As told in the film, the arrogant academic world and the international press did in fact descend on the site once the word got out about a major Anglo-Saxon ship burial discovery containing wondrous treasures. Also true is that Basil Brown’s knowledgeable and careful part in the discovery was disgracefully sidelined by all except Mrs Pretty, who insisted that he stay, as the film shows: his role in the excavation was only properly credited to him quite recently.

An inquest into the grave discovery did take place in the local village hall to determine ownership of the hoard, and photographs suggest it was as lively as the film shows it to be. Mrs Pretty did generously donate this huge treasure to the British Museum, as she is shown saying she will do. All of this is as the film’s story tells it. As well as Mrs Pretty and Mr Brown, some of the other characters too are real, including Charles Phillips, a senior government archaeologist, and Stuart Piggott, the renowned Edinburgh professorial founder of pre-historical archaeology, and his wife Peggy. Mrs Pretty also did have a young son called Robert, albeit a few years younger than the eleven-year-old depicted in the film.

The characterisations that emerge, however, are fictional, based on John Preston’s 2007 novel The Dig. Australian director Simon Stone adds some entirely fictional characters and as well as giving Charles Phillips, Stuart Piggott and his wife Peggy less than genuine treatment. Which matters not a jot for imaginative semi-historical reconstructions: in The Dig a charmingly elegiac and mostly satisfying edifice is constructed on only the bones of checkable reality. To be fair to the Piggotts though, they separated in 1956, not in 1939, Peggy Piggott didn’t run off with Mrs Pretty’s invented cousin, a rather dishy airman named Rory, called in to be the romantic interest as a photographer on the site, and while Piggott was a dandy fond of splashy silk waistcoats, he may not have been gay and uncaring of his wife, as implied in this telling. Charles Phillips from the British National Office of Works is slightly better served, depicted as extremely pompous at first, but throwing himself into the spirit of the thing in the end.

As played by Carey Mulligan and Ralph Fiennes, the portrayals of Mrs Pretty and Mr Brown are pitch perfect. It may seem unlikely, but Fiennes captures entirely the weather-beaten image of an older man in baggy old clothes, sensitive and taciturn, his workman’s hat on his head, assertively deferential in his broad Suffolk accent to Mrs Pretty. Attractive and fashionable when she visits her doctor in London, Carey Mulligan as Edith offers a moving portrait of an isolated ever-musing and fragile woman constrained by her times, held fast by her wealth and position but lost in her own lonely shell, out of which she comes to talk of archaeology and the dig with this man lodged in her house, but who takes his meals with her butler and other staff in the servants’ kitchen.

A beautiful part of the whole scenario is that Edith’s young son, brimming with enthusiasm over the whole project and full of rocket heroes, takes a shine to Basil as an astronomer, and Basil’s patient teaching of this anxious and fatherless boy, who is accented with upper-class gusto, is heart-wrenchingly quiet and fatherly. Things fall naturally into place there. Less so though between Mrs Pretty and Mr Brown, for here the structuring of the film lets them, and us, down quite badly. We know it would be a mistake to think a Lady Chatterley moment was coming, but our pair are far too quickly whipped away from us for a while.

This leaves us in a sudden emotional limbo, as what we are being set up for, and thankfully do get in the end, is the sort of unresolved tension between two self-contained people who are flung by circumstance, fate some might say, into each other’s worlds. In that sense The Dig is reminiscent of Kazuo Ishiguro’s starkly woven 1989 novel The Remains of the Day, about the chances lost between a similarly reticent man and woman caught in the British class structure in the same immediate pre-war period, and this novel’s excellent filmic interpretation in 1993.

One mild hiccup in The Dig occurs in the form of the introduced romance between the budding archaeologist Peggy Piggott and Rory, the airman bound for the uncertainties of war in one of the planes we see flying in formation over the barrow’s field to the RAF airstrip on nearby Martlesham Heath, now the home of British Telecom’s Research Laboratories, where my husband once worked on sabbatical.

No matter though that we also enfold Peggy and Rory as the story progresses and other players make their Shakespearean entrances in a film where exits are in the air. We soon see that Peggy is also a conflicted soul, and Edith helps her out with advice about the need to seize the day—which Edith herself fails to do.

She tentatively invites Basil to dine with her one evening, and he accepts, but a visit from his salt-of-the-earth wife that night means that fate never quite works its best way with Edith and Basil, crossing both of their stars forever. Ishiguro would be proud. Mrs Pretty does though stand up for Mr Brown, her employee, recognising his efforts to protect the site in its early stages, and we still sense those many things left unsaid, for this is a film that states very little but still says a lot. Emotional restraint, the very Englishness of life in this quiet corner of a threatened world, is the order of the day, rather than its remains.

The real Mrs Pretty’s spiritualist beliefs are underplayed, but the sense of an immanent spirit hovering over the wide expanse of the barrows field and its mounds is palpable in the landscape photography used, the long shots of wide open skies. I have been there myself, alone, on a day when it was closed (who ever checks these things?), and wandered around cautiously, the only living soul in the place, spookily aware of the ravens in the distant trees and all of its windswept and timeless isolation.

The village at Woodbridge and The Bull (the same old pub that is now a boutique hotel where we stayed), the manorial big house, the barrows, the class divides, and the finding of a continuity with the longue duree, the deep collective past, as two people reach for each other and miss: it all tightens its grip as you watch. As the camera draws back on it, distancing you from these fleeting and nuanced lives, you are wistful yourself, leaving a lost past that slowly retreats from your view. The dig ended on August 24, 1939, Hitler marched into Poland on September 1, and on September 3, Britain declared war on Germany.

5 thoughts on “Digging for a Timeless Treasure”

The Meaning of the Western