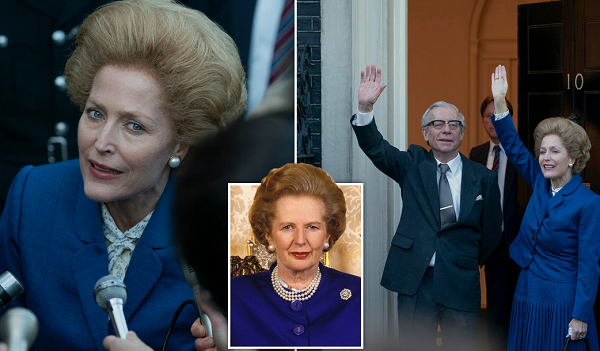 Watching the fourth season of The Crown recently, I couldn’t avoid a slight feeling of melancholy as the series depicted the gradual erosion of Britain’s traditional social manners and styles, the decline of British power internationally, the weakening of the monarchy, and above all the waning prestige of Royal Family itself as love affairs, divorces and scandals let daylight in on magic.

This feeling was accentuated by the season’s first scene, which brought back Claire Foy to reprise her role as the young Princess Elizabeth in the first season. It shows the Princess’s first solo public speech, given during her 1946 visit to South Africa over the radio, in which she dedicated her life to the service of “the British family of nations”. As she speaks these words in her famously clear enunciation, the viewer sees a succession of images of Indians, Africans, Canadians, Aussies, New Zealanders, and different kinds of Brits on farms, beaches, and prairies, in factories and homes, all crouched around radios listening to their future monarch with hopeful attentiveness.

It’s a powerful mythic representation, only one year after the end of the Second World War, of a united imperial people entering into their inheritance after conquering in a righteous war. That world has gone so completely that many people have forgotten it ever existed. Not all of the spirit of that moment has evaporated, however. As later episodes of The Crown will show, some of that spirit still clings to the person who was the young woman at its centre.

Still, the nations and peoples of the British family of nations in 1946 were about to enter into many different inheritances as anti-imperial nationalism, the Cold War, Suez, the “satire boom”, mass immigration, multiculturalism, the Falklands War, the miners’ strike, paparazzi, the internet, and a hundred other forces of change broke up both the imperial and royal families. The Crown is the saga of that long retreat with occasional moments of soap opera.

It should be said that those images exaggerate the national power and royal stability of the day. Britain’s relative economic power had peaked in the 1880s; its imperial authority reached its widest extent in 1919-1920; and its status as the world’s greatest power was transferred to the United States after Pearl Harbor. Royal stability and respectability were themselves of recent invention, painfully reconstructed by George VI and his Queen after the Jazz Age irresponsibility of Edward VIII and Wallis Simpson.

Britain and its empire were briefly at rest, deceptively restored in prestige, and about to enjoy the “fairytale” wedding of Elizabeth and Philip as compensation for the continuation of wartime austerity. But both were about to assaulted not only by decolonisation, higher taxation and welfarism but also by the subtler threats of social mobility, prosperity and personal freedom.

Elizabeth herself, the slave of duty as both Princess and Queen. is almost the only figure who consistently resists them in The Crown, as in real life. Season Four shows how two of the resulting clashes work out and inadvertently illustrates the temptations and dangers of a third.

The first clash is that between personal happiness and royal duty. It’s a theme already explored in Season Two which told the story of how Princess Margaret’s desire to marry Group Captain Peter Townsend was opposed among by others by Tommy Lascelles, the quintessential royal courtier, who persuades the Queen and eventually Margaret herself that the marriage should not go ahead. Lascelles (brilliantly played by Pip Torrens) is both shrewd and tough in his advocacy that Christian and royal duty must prevail. When Elizabeth objects that Margaret’s heart will break if she has to renounce Townsend, he replies simply: “Hearts mend.”

In Season Four, however, it is Margaret who provides a counsel of wise realism in her advice to a dinner attended by all the royal women on the eve of another fairytale wedding but one that takes place and goes wrong—that between Charles and Diana. Margaret’s heart has not exactly mended. After a failed unhappy marriage, denied real royal work by the Queen, and unable to follow through on her religious impulses, Margaret comforts herself with pointless affairs, a hedonistic life and her royal status. None really satisfies—work, love and God being Viktor Frankl’s recipe for the meaning that makes life satisfying and its sacrifices bearable, and she lacks all three.

Though wounded, she is shrewd and experienced enough to object to the Charles–Diana marriage on the simple grounds that: “He loves someone else.” It is therefore bound to end in tears, not just because all three of them in the marriage—Charles, Diana, and Camilla—will be unhappy but also because the Christian morality and royal rules that were strong enough to keep her and Townsend apart in 1956 no longer have the force to keep Charles and Diana together in the 1980s.

Their marriage duly creates private distress, but also a massive public scandal that is about to break as Season Four ends. Its final scene stations Princess Diana, who is on the verge of leaving the royals, on the extreme edge of their Christmas family photograph. For how can the rules prevail against passion when we have no other reason to value them?

The second clash is that between traditions, rules and duty on the one hand and the need for bold reform that challenges them on the other. Inevitably, the Queen personifies the former and Mrs Thatcher the latter in episodes about economic modernisation and Commonwealth unity against apartheid.

Was there a clash in reality? Yes, but it was more a clash of perspectives than of policies. A prime minister embarks on controversial policies daily; that’s the job. Almost the only directly political intervention the Queen can undertake, however, is that of umpire between the parties when an irresolvable crisis threatens the constitution—think the Whitlam–Kerr crisis in 1975. Mercifully, such crises are rare. In their absence the monarch’s role is advise, counsel and warn when a government’s policies seem to be failing or creating conflict, but not to intervene further.

Since the political traditions in the Queen’s political lifetime had been shaped by the establishment’s excessive fear that a serious social clash—such as riots or strikes—would provoke a constitutional crisis, they protected not order and prosperity but over-mighty labour unions, the spread of rent-seeking, and economic stagnation. It was a kind of establishment sentimentality to think that these evils could be overcome by kind words and coronets for union leaders.

Mrs Thatcher pursued the necessary economic and industrial reforms which were duly met with opposition; the Queen advised, counselled and warned that they were provoking distress and conflict. Indeed, she went further: in a rare breach of her own rules, she instructed her aide to leak these concerns to the media (and promptly betrayed the aide when the story hit the fan). Thatcher’s government was briefly embarrassed but ploughed on to win the next election, and the UK economy became the fourth-largest in the world.

It’s a similar story with their differences over the Commonwealth. The Queen greatly valued her role as Head of the Commonwealth and was nervous that Mrs Thatcher’s opposition to sanctions would damage it. She is shown in The Crown as conspiring with other Commonwealth leaders to render Thatcher’s stance meaningless. If that happened as depicted, it would be open to serious criticism. Constitutional monarchs are not supposed to frustrate their government’s policies even when they are constitutional monarchs of other countries too. But differences between Queen and Prime Minister were undoubtedly real.

What is objectionable in The Crown is that it loads the dice. One gets no idea that Mrs Thatcher had good reason to oppose sanctions—not only her stated argument that sanctions would delay the economic advance of South Africa’s black citizens that was their best route to political power but also that she was conducting aggressive (and ultimately successful) private diplomacy to persuade the white government to embrace multi-racial democracy. Instead it is hinted absurdly—and shamefully—that she was motivated by a desire to help her son’s business career in the country.

Which points to the third clash—that between dramatised documentary and truth. A dramatised documentary is now defined as a play about real people in real situations in which the author has total freedom to invent their words, actions and motives. That freedom is obviously a temptation for the writer (and his collaborators in staging the drama) to indulge their prejudices by inventing discreditable actions by their characters, by portraying them as foolish, awkward, tongue-tied, scheming or otherwise unattractive, by omitting important episodes that redound to their credit, as with Thatcher and the end of the Cold War, and generally by manipulating the historical record to show them in the wrong. That temptation risks turning libels into historical truths.

As The Crown has gone from its first to its fourth season, it has progressively succumbed to that temptation. Peter Morton is a brilliant dramatist, and his dialogues between Lascelles and the Queen are superb in part because they illuminate what’s at stake in the Palace battles while sticking closely to the historical record. In the second season, however, Prince Philip is shown conducting affairs with South Pacific maidens (but apparently without foundation). Pure inventions follow in later seasons.

It is the partisan portraits of individuals that are most disturbing, however. Prince Charles was certainly at fault in his three-sided relationship with Diana and Camilla, but the one-sided way it’s depicted suggests either that Mr Morton’s wife is a republican or that his mistress is a modern architect. Mrs Thatcher, one of the most formidable political leaders of modern times, is shown as older than she was in her political prime, narrow, awkward, and easily outmanoeuvred. (It’s perhaps enough to quote the opinion of the New York Times that her depiction was “compassionate”.) And the Queen Mother, a formidable personality under a smilingly gracious exterior, who helped to strengthen the monarchy after Edward VIII’s defection, stayed in London throughout the Blitz, is presented as callous, trivial and dumpily foolish.

That was not everyone’s opinion. In his admirable biography of Thatcher, Not for Turning, Robin Harris writes of his former boss that “she got on much better with the Queen than is frequently imagined, albeit with greater warmth in her last years. But she had the greatest regard for the Queen Mother, who reciprocated it.”

Memo to Crown producers: You have a great story and a clever writer. Don’t mess it up with lousy politics.

A Storm is Coming on the Chiltern Hills