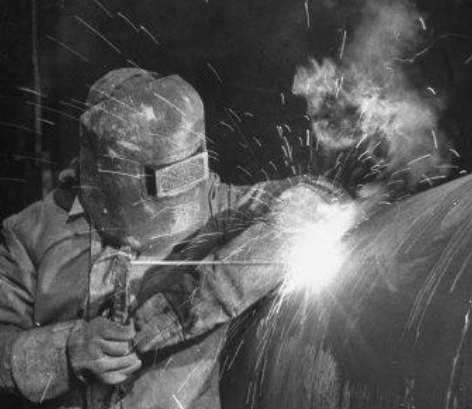 During his Higher School Certificate year, a friend’s son looked several months ahead at his options for 2020. He’s a very bright kid from a family of tertiary graduates, so it was generally assumed that the boy—I’ll call him Jerry—would enrol at university.

But Jerry had other ideas. He’d become intrigued at some point by videos about welding. There are hundreds of them on YouTube: tutorials, restorations, guides, historical features and forums. The more welding videos he watched, the more fascinated Jerry became.

Tim Blair appears in every Quadrant

Impressively, an increased awareness of welding’s complexity only served to increase Jerry’s interest. As engineering-minded readers will be aware, welding is not simply a matter of sticking a couple of bits of metal together and applying heat. Different metals, and different formulations of alloys, require very different treatments.

As well, there is the issue of where and how a weld is applied. This is dependent on the loads to which a finished structure may be subject, and other factors, such as that structure’s role in a piece possibly requiring future periodic disassembly for maintenance.

In other words, physics, formulas and foresight are all in the mix, which generally will repel your average teen. But there is also art. Jerry is a creative soul, and he saw in those YouTube videos many miracles of metallurgy.

By the way, anyone who doubts welding’s abundant artistic component is advised to visit Space Center Houston, where a Saturn V rocket is displayed. At the end of one gigantic section, you’ll find hundreds of tiny, perfectly-finished spot welds dotted like jewellery around the section’s perimeter.

Each weld is a miniature masterpiece. Michel­angelo himself would weep at their precision. In any case, Jerry decided to buck the family trend and, despite easily having the required HSC marks, declined to seek university enrolment. Instead, he would seek a welding apprenticeship.

His family were not merely supportive of this. They were elated, because they had come to realise—as have many Australian families—that modern universities actually subtract knowledge and replace it with politics. This is especially so in arts courses, which was Jerry’s likely destination had he signed up for a few years of tertiary wisdom-smothering.

Besides, a Bachelor of Arts is essentially just a reading list with a completion certificate at the end, so Jerry can still get any desired book learnin’ done in his own time while simultaneously studying his chosen craft. Within three or so years, Jerry’s arts student contemporaries will have a degree, a significant debt and very likely the sort of logical handicaps that cause a person to vote for the Greens.

By comparison, Jerry will likely have read the same (or better) books, be employed and very possibly be paying off a house. And, because he’ll have been paying taxes and will therefore have expanded his understanding of how government-approved theft works, voting for the Greens won’t be a consideration.

His advantages abound. Rather than being taught by arrested-development semi-adult academics, he’ll learn from fully-formed people who build useful things. Jerry has chosen wisely. If your own school-age children or grandchildren are currently considering university, perhaps you might alert them to a wider range of opportunities.

Also, a welder is a lot more helpful around the house than is, say, a sociology student. Then again, what isn’t? A dishwasher installation manual is preferable to anything by Emile Durkheim, who probably wouldn’t be able to tell you the difference between flux core MIG welding and your fancier plasma arc stuff.

Arts PhDs are not worth much now and will be worth far less in a post-coronavirus economy. Welders, plumbers, carpenters and other tradespeople have been financially ascendant in recent decades, and will probably find themselves in even greater demand as we are forced into a back-to-basics society.

The potential ramifications of this extend far beyond economics. A reduction in the social and cultural primacy of universities might well deliver clearer thinking, finer literature and improved politics. Art overall may improve, although the easiest way for the government to achieve this would be to immediately cancel all arts funding and all tax-funded government arts departments.

As the late, great Giles Auty—artist, critic and cricketer—wrote in one of his final Quadrant pieces: “I believe that the greatest harm wrought to art in my lifetime has been the steady intrusion of public funding into the realm of all of the arts in Western countries.”

Giles enjoyed a long, brilliant life, but it is still a pity he won’t see how a coronavirus-driven reduction in public funding might turn matters around. It is a pity, too, that he won’t see the continued rise of trade artisans.

Speaking of whom, Jerry began his apprenticeship at the beginning of 2020 and quickly found himself learning welding’s essentials at various building sites and the like. Then, after a few months of work, there came a dramatic development.

Jerry’s apprenticeship was over. Not because he’d been fired for doing something stupid, but because he’d been promoted. All of those YouTube videos, viewed for entertainment and interest rather than education, had supplied the boy with an extensive understanding of welding theory. It thereafter required only a few months of practical application for Jerry to become proficient.

So his employer promoted him. Apprenticeship done. At eighteen, Jerry is earning something north of $40,000 per year. (He’ll probably be paying that much in taxes sooner than later, so he’s saving hard.) And his family, who five years ago anticipated that all their children would go to university, now view tertiary education as a kind of second-best fall-back option if those kids can’t cut it in a trade.

Well done, Australian universities. By making themselves so political and otherwise pointless, they’ve created the perfect circumstances for a potential revival of Australian industry. And at the perfect moment, too.

BACK in the days when Australia had factories, workers would sometimes notice a curious fellow armed with a clipboard among them on the factory floor.

This was the time and motion man, a contractor employed to cast his eye over workplace practices and to suggest ways they might become more efficient and productive.

Naturally, unions hated these people, and would sometimes call for strikes if the time and motion man wasn’t banished from their presence. Notably, the Australia-wide Great Strike of 1917 began when New South Wales railway and tram workers took exception to being monitored for time and motion studies.

The strike lasted for six weeks, during which time workers across the nation productively marched and demonstrated against the concept of work. It’s easy to see why unions hated time and motion studies; the more efficient a workplace is, the fewer workers it requires. Which explains why the ABC needs a $1.3 billion budget in order to service a maximum potential market of just 25 million people.

Any time and motion man worth his stopwatch and slide rule would likely faint in shock if he ever so much as glanced at the production credits for even the briefest ABC program. In any case, their area of expertise being efficiency, time and motion experts had a few sure-fire shortcuts of their own.

Rather than exhaustively study every employee’s movements and every task undertaken, your wily time and motion wizard would instead identify and carefully examine the laziest worker who nevertheless managed to produce the same output in the same time as his more energetic peers. Such an individual might typically avoid multiple repeated tasks by devising a way to combine them, or he might bring to work his own superior tools instead of relying on the aged, shop-worn devices provided.

Even I’ll sometimes accomplish something along crafty/lazy lines. In April, my editor at the Daily Telegraph phoned with an urgent assignment. The paper had received a letter from Sydney’s Chinese consulate expressing anger over our coverage of coronavirus origins and we needed to publish a suitable reply.

But the paper’s deadline loomed. There plainly would not be enough time for a paragraph-by-paragraph rebuttal of the consulate’s ridiculous claims. So I just put the letter through a Beijing-style censorship process, complete with slabs of redacted text.

This probably took only about twenty minutes, and resulted in revised lines such as “Is China responsible for a ‘cover up’ and ‘delaying’ response to the outbreak? The answer is … clear” and “China’s sole purpose is … to stand by and do nothing in the face of the global pandemic”. The Chinese consulate was enraged. More importantly, the Daily Telegraph scored Lord only knows how much online traffic.

Sometimes the biggest impact is made with the least effort. I was chatting about this with a friend who since the pandemic outbreak now works entirely from home. Noting how many people in his circumstance had become their own time and motion experts, I asked if he’d made any particular improvements to his work practices.

Only one, he said. He’d bought a drinks fridge for the balcony so he didn’t need to come inside every time he wanted another beer. He’s using his time well.