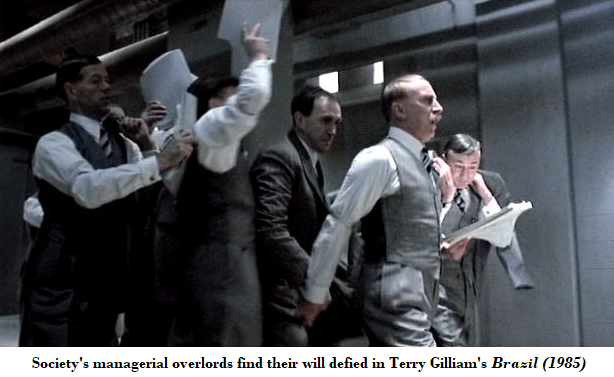 In The Managerial Revolution (1941) James Burnham described how the scale and complexity of developed nations have shifted the sovereign decision-making power away from elected representatives and the owners of wealth, to an unelected group charged with its public distribution and employment. The future he predicted was one in which direct control by a parliamentary elite would be incompatible with the rising managerial order. Writing half a century later, Paul Gottfried’s After Liberalism: Mass Democracy in the Managerial State (1990) illustrated how this process, now in its advanced stages, has inverted political nomenclature and resulted in a situation where “governing goes on in a blurred zone, between consent and nonaccountable control”.

This revolution, which has depended significantly on a gradual but radical redefinition of “liberalism” over the last century, has become increasingly evident in the Anglo antipodes. It has also made itself felt across public and private governance, potentially confusing the state’s diplomatic initiatives, redefining the relationship between the state and the citizenry, and revolutionising the nature of corporate affairs. In each case, compliance is secured through coercion, either explicit or implied, while that coercion is necessitated by social decay and the system’s increasingly obvious moral bankruptcy. Though they might seem unrelated at first glance, developments in these different areas of political, corporate and social life illustrate symptoms of this new managerial order. A select group of recent examples are described in what follows.

In late April, the federal Minister for Health, Greg Hunt, held a press conference with one of the country’s highest-profile business people, Andrew Forrest, on strategies employed to mitigate the threat posed by the coronavirus pandemic. The event would have been unremarkable if it were not for the fact that Forrest invited the Chinese Consul-General to the podium without Hunt’s knowledge. The gaffe, which effectively contributed to the promotion of PRC public relations in Australia, was widely reported as an embarrassment to a government whose close geostrategic co-operation with the US has been a foreign policy priority in the South-East Asian region. This was not the first time that such a media “ambush” had occurred at Forrest’s instigation—an earlier incident took place in Western Australia, where much of his mining interests are located.

Former Prime Minister Malcolm Turnbull responded to this gaffe by claiming that any politician who confronts Chinese interests locally “cannot expect any support or solidarity from the Australian business community”. Turnbull’s politics could be described as a neoliberal extension of the Labor Party’s geostrategic reorientation from the Anglosphere in a so-called “Asian pivot”. While this pivot is often couched in calls for a republic and the wholesale reconstruction of state symbols to reflect a utopian nominalist state favoured by ideological “progressives”, the practical consequence would necessarily involve de-emphasising Canberra’s relationship with Washington as well as London, in favour of our “near north”. The fortunes of Australian mining have indeed been connected to the Chinese market’s insatiable appetite for raw minerals, but when Forrest defends himself by stating that “anyone who wants to put America first, they are putting Australia second” it is uncertain whether it is the national interest or his business concerns that take precedence.

Burnham wrote that in managerial society “politics and economics are directly interfused [sic]; the state does not recognise its capitalist limits; the economic area is also the area of the state; consequently, there is no sharp separation between political officials and ‘captains of industry’”. It could be added that the intuitive connection between the people (in particular their cultural and historical legacies or interests) and the immediate interests of the state’s officials or “captains” is likewise broken. While Forrest more closely resembles the class which The Managerial Revolution predicted is in the process of being dethroned, that revolution has not proceeded according to a strict application of Burnham’s terms: the managers he described can take many forms in overlapping fields of operation. The “blurred zone of governance” referred to by Gottfried is therefore found in the intersection of public bureaucracy and private administration, and includes a corporate sector which has never before been so disconnected from national boundaries and never had such intimate impact on the lives of private citizens.

The one universal characteristic is a shared ideology that is expressed whenever this managerial class exerts its influence or control. Burnham predicts a state in which “nearly every side of life, business and art and science and education and religion and recreation and morality are not merely influenced by but directly subjected to the totalitarian regime”. The corporate sector’s social-justice-oriented campaigns are the most obvious example of this tendency towards totalitarianism in the so-called “private sector”. These expressions of fealty to the corporate regime’s dominant ideologies are “voluntary” only to the extent that an employee is unambitious and unconcerned about his career prospects: the coercion he feels is soft, implied, less obvious, and therefore far more insidious in its drive to force compliance. In Burnham’s terminology, the managerial class’s increasingly conspicuous objective is the need to “curb the masses” so that they “accept” the new regime. Parallels can be found in official government rhetoric, where attempts to moralise demands through appeals to collective security echo in mainstream political discourse.

Consider the following: in April the Prime Minister, Scott Morrison, intimated that a government tracking application may be mandatory for all citizens, supposedly to help deal with the spread of the pandemic, with collected data being stored by a private transnational corporate entity, Amazon; in May, the Minister for Home Affairs, Peter Dutton, claimed that people “shouldn’t be hearing” arguments against compulsory vaccinations, adding that “not even religious beliefs are grounds for exemption”; the Prime Minister repeated earlier comments that those who refuse this benevolent interdiction into their private affairs may have family tax exemptions withheld; in August he stated explicitly that the public should expect the coronavirus vaccine—which does not yet exist—to be “as mandatory as you could as possibly make it”. It should be noted that this is the rhetoric of a government associated with the (supposedly) ideological Centre-Right, led by a party named in classical British terms “Liberal”, and traditionally connected to the cause of individual liberty, personal responsibility and free expression. Likewise, the “Liberal” state government in South Australia this year passed laws allowing authorities acting under the Emergency Management Act to remove a child from any premises, to a state guardian, with “reasonable force”. Blurring the illusory distinction between the two main party blocks, Victoria’s state Labor government passed laws which allow authorities acting under their corresponding statute to “take possession and make use of any person’s property as the Minister considers necessary or desirable for responding to the disaster”.

The rhetoric and legislative history brings to mind the work of Thomas Szasz, who wrote, “If people believe that health values justify coercion, but that moral and political values do not, those who wish to coerce others will tend to enlarge the category of health values at the expense of the category of moral values.” Szasz was writing about the pathologisation of unapproved political opinions, such as those that challenge the aforementioned expressions of fealty to the regime’s dominant ideologies. However, his warnings apply equally to situations where the management of health issues encroach on the realm of civic rights. As Gottfried writes in After Liberalism, “Fearful subjects have given up liberty for security, but they may regret this choice if the sovereign loses their respect.” They may indeed, yet the coronavirus tracking app was downloaded six million times within two months of its release without aiding in the identification of a single close contact infection among the populace. In Victoria, military personnel have had to assist a call centre due to the volume of informants “dobbing” in their neighbours for supposed pandemic safety violations. One wonders whether these measures, and the society they are shaping, will not prove more fatal than the ailment they seek to cure.

The ease with which the public has allowed itself to fall deeper into the managerial panopticon naturally alarms those who see these developments as further encroachments on civil rights across different yet related policy areas. Despite the terrorism threat level not having risen in five years in Australia, the same “Liberal” government proposes to introduce laws that would allow the interrogation of fourteen-year-olds and further enhance civilian tracking abilities. This last move has been vocally opposed by a senator representing the Greens; thus the irony of a political party which would ordinarily embody the Cultural Marxist vanguard, but is now championing concerns typically close to the heart of libertarians and cultural traditionalists.

What do all these seemingly disparate developments have in common? The press conference hijacking incident and the growing authoritarianism of the government and private sector bureaucracies are both manifestations of the same trend, and both exhibit the same totalitarian tendency; the former because it trespasses onto the realm of electoral politics, the latter because it violates the integrity of the private realm. A classical Tory might conclude that while there is a place for everything, today nothing seems to be in its place, thus disorder proliferates. Since the withering of the nation-state hasn’t been universal, global powers such as China (whose politics are still defined by traditional loyalties, at least in the realm of official discourse) will naturally take advantage of the weaknesses of their neighbours who are motivated solely by economic concerns or abstract ideologies that reinforce mindlessly universalist ways of thinking. In response, governments resort to ever more invasive methods of control to keep the fracturing and bloated Leviathan afloat, while interpersonal trust among the citizenry plummets, reinforcing social decay. Libertarian academic Hans-Herman Hoppe writes in A Short History of Man: Progress and Decline (2015) that “every detail of private life, property, trade, and contract is regulated by increasingly higher mountains of paper laws” and furthermore:

the higher the state expenditures on social, public and national security have risen, the more private property rights have been eroded, the more property has been expropriated, confiscated, destroyed, and depreciated, and the more have people been deprived of the very foundation of all protection: of personal independence, economic strength, and private wealth. The more paper laws have been produced, the more legal uncertainty and moral hazard has been created, and lawlessness has displaced law and order. And while we have become ever more dependent, helpless, impoverished, threatened and insecure, the ruling elite of politicians and plutocrats has become increasingly richer, more corrupt, dangerously armed, and arrogant.

This may be hyperbole characteristic of an eccentric anarcho-capitalist, but it illustrates a perception that is increasingly held by sections of the public. Whatever remnants of sovereignty still remain within the electoral class’s institutional framework—its parliaments, civil services and so on—political elites need to fundamentally re-evaluate the premises on which they operate. The necessity of circumstance may indeed be driving many of these tendencies, particularly in relation to the policing, intelligence and security services, but the question that social scientists and policy analysts should be asking is whether these trends are sustainable in the long term. It is difficult to imagine an affirmative answer. Sadly, it is more difficult to imagine the current political elite honestly contemplating the question—and therein lies the tragedy of the current moment.

Edwin Dyga is the Chief of Staff to the parliamentary leader of the Christian Democratic Party in New South Wales. He was the founder and convenor of the Sydney Traditionalist Forum

The Split between Israeli and American Jews

The Other Side of Dick Cheney

The False Promise of Internet Elections