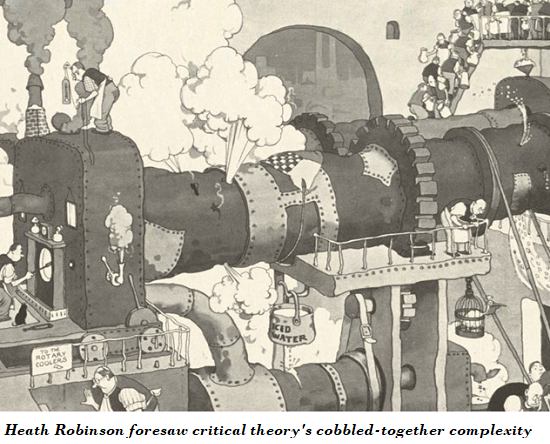 On August 18 there appeared on the website of the Critic, a new and lively conservative magazine in London, an article that alone would qualify it as the rag to watch. The article had the title “The BLM Takeover of Whitehall”, and it was a twenty-four-carat, old-fashioned, publish-and-be-damned scoop.

Its author is Justin Elderman, who is either a reticent recluse on the scale of Greta Garbo (though even she was inconsistent and once played topless tennis with Quadrant contributor David Pryce-Jones) or, as I strongly suspect, the bearer of a pseudonym, since Wikipedia has neither photographs of him nor other writings by him. And if he’s a civil servant, as is likely, he’s well-advised to keep his identity “Top Secret”.

After a little preliminary throat-clearing, undercover agent Elderman fires with both barrels in the third paragraph:

This report was not the first sign that something untoward was happening. But the Elderman piece was the most thorough and well-documented account. It revealed not only that the most senior civil servants had unconcernedly tweeted out calls for their junior colleagues to give unqualified support to BLM but also that formal civil service structures existed to pressure government departments to implement internal policies shaped by BLM ideology. And it summed up the situation in the following sentence: “Our supposedly impartial civil service is institutionalizing far-left identity politics.” Read it all here

It’s important to unpack what’s wrong about all this. In the first place, civil servants are not supposed to have policies of their own. Their job is to implement the policies of the government. Second, for that reason they’re not supposed to take controversial political stands against the government of the day. Third, the senior mandarins quoted were either unaware that Black Lives Matter represents a controversial political ideology hostile to the current Tory government (and almost certainly unpopular with most people) or were deliberately obfuscating the fact. In either case they’re promoting policies contrary to those of the elected government.

BLM is not simply a humane liberal slogan calling for racial justice, inclusiveness and diversity—which almost any government might adopt from apolitical notions of civic virtue—but two very different and sinister things. First, it is an organisation, self-styled as “Marxist”, with a political program that calls for “dismantling imperialism, capitalism, white supremacy and the state structures that disproportionately harm black people in Britain”. And, second, it is the application to racial questions of a body of political ideas, known as “critical theory”, that argues inter alia that white people are all racists; that whites are oppressors and all other races are victims; that “colour-blind” policies are racism in disguise; that conventional ideas such as the value of hard work and “meritocracy” are the imposition of white culture on minorities; and much more nonsense in like vein.

I’ve been following the development of “critical theory” ever since I picked up a book by Frantz Fanon, the North African psychiatrist who thought that anti-colonial violence was indispensable to the genuine liberation of the oppressed, in Collet’s left-wing London bookshop in the late 1960s. I was one of Collet’s’ best customers. Its shop assistants called me “Comrade”. I’ve slogged through vast jungles of impenetrable jargon in Marcuse, Adorno, Horkheimer, the French structuralists (and post-structuralists), Michel Foucault, and their tepid American imitators such as Robin diAngelo of white fragility fame. And despite some brilliant insights into the power of culture over politics in Antonio Gramsci and a lot of perverse ones in Foucault, the overall doctrine that was born of the marriage of critical theory and identity politics struck me as the greatest nonsense at every stage of its gestation.

It’s a dogmatic theory that calls itself “anti-racism” but is in fact a kind of rigged anti-white racism: whatever response whites make to a question about an allegedly “racist” episode, the theory invariably shows them to be racist. It’s constructed, like Marxism before it, so as to be unfalsifiable, thus proving that its claim to scientific status is false. It supposedly rests on self-evident axioms from which all its conclusions derive. But those axioms are a great deal more fragile than “whiteness” and crumble upon critical scrutiny. Thus: It is not true that racism is whatever anyone perceives as racism since the accuser may be either mistaken or lying. It is not reasonable that women or other victims must always be believed even if other evidence contradicts their testimony. It is not good public policy that statistics should not be collected if they are likely to contradict leftist preconceptions—for instance, that children prosper equally in all kinds of family structures—since it will damage the life prospects of the children for whom you claim concern. It is not possible to believe that all cultures are equal if you also believe all human beings are equal since some cultures deny human equality.

And, yes, the critical race theory of BLM and the New York Times is indeed a doctrine marked by “complexity” but that’s because if your panacea is constructed from a load of old falsehoods, you can hold it together only by the most complex Heath Robinson string-glue-and-sealing-wax logic. (See explanations of “intersectionality” passim.) Or as the great literary critic John Gross once quipped: “Complexity is the first refuge of the scoundrel.”

Alas, that doesn’t mean it is easy to grapple with such a collection of dense mental obscurities. A critical theory that denies the possibility of criticism from outside the theory is as slippery as a greased pig. My advice to you, therefore, is not to follow my example and with its original progenitors but to read the works of those who have done the hard slog of analysis and come back into the light with accurate, careful and (inevitably here) damaging criticisms. I refer not to myself but to Helen Pluckrose and James Lindsay—Helen leaning left, James rightwards, I believe, but both straight-shooters—who have written the indispensable guide to “woke” ideology. Their book is titled Cynical Theories: How Activist Scholarship Made Everything about Race, Gender, and Identity—And Why This Harms Everybody. It establishes that woke policies that ostensibly favour the poor and minorities do not do so and may even do the opposite.

Boris Johnson would be rationally justified in sending copies of it to all the permanent secretaries in Whitehall, as Margaret Thatcher and Keith Joseph used to send copies of Hayek’s works to the mandarins of their day. It’s essential reading if you hope to understand the nature of the cultural-cum-political clash that divides Britain, the United States and Australia—one that pits professional elites who control the cultural, legal, business and media institutions against most people and their elected allies in politics and culture. The cultural elites seemingly have the advantage over the politicians because they have recruited social and racial justice to their side in the form of BLM. Pluckrose and Lindsay undermine that claim, but neither elites nor politicians know it.

As a result you have the Sherlock Holmes mystery of the scoop that didn’t bark in the night. The Critic’s story has not been challenged. Apart from the distinguished example of Charles Moore, however, it hasn’t been followed up either—not in the Daily Mail nor the Times nor the Sun nor in any of the usual voices of indignant Middle England. Moore has ploughed a lonely furrow in defence of constitutional orthodoxy on the issue. And that is all the more remarkable because Downing Street is waging a quiet guerrilla war to dispatch some of the “woker” mandarins into the private sector: the permanent secretaries of the Justice and Education ministries have been defenestrated and more will probably follow. But no one says it’s because their giddy endorsements of BLM were issued at the very moment when mobs were pulling down statues and attacking the Cenotaph which, as Douglas Murray has rightly observed, is a site commemorating our dead that can truly be called “holy” even today. They defend the constitution by stealth.

It’s not hard to understand this silence. It means not consent but fear and moral nervousness. Everyone looks at the forces assembled on both sides and calculates the side likely to win. How do the media, universities and charitable institutions divide? Eighty-twenty for social justice, Minister. We can’t ignore the feelings of our younger graduates who have learned a different history from us. And corporations? Every company that advertises in Vogue is for Black Lives Matter, editor. (Pity about the looting.) How can Whitehall resist this creeping critical theory? I’m sure we shouldn’t over-react, PM. Maybe a few sounding-out sessions over coffee with high-flyers?

So a self-congratulatory moral iconoclasm now tears apart Britain’s cultural institutions from the National Trust to the BBC to the British Museum as their woke officials seek to “decolonise” the minds of the British people by attributing every national achievement to slavery and minimising the British role in suppressing it worldwide.

The Tories can’t let this drift on. Vital though Pluckrose and Lindsay’s arguments demystifying critical race theory are, they need determined presentation if they are to win the day. Donald Trump may be a primitive, but he has a record of taking long-ignored conservative arguments out of cold storage, applying them forcefully, and making them stick. He did so last month when he issued an executive order prohibiting the use of critical race theory in federal diversity training courses. It’s a challenge to the critical race theorists they’ve never faced before. It won’t go away, and if it’s repealed by another administration, there’ll be a campaign to bring it back.

One thought on “Complexity, Your Modern Scoundrel’s First Refuge”