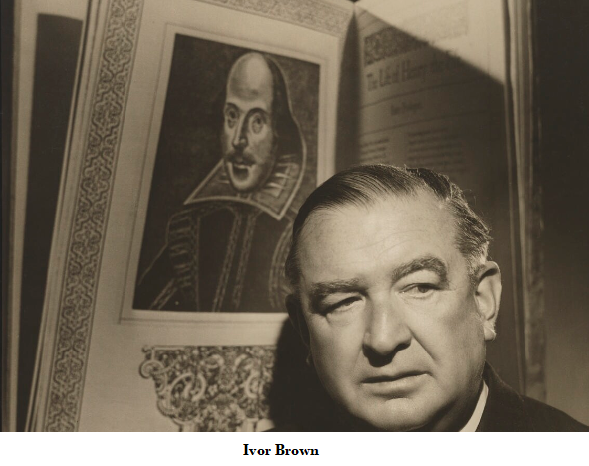 I am an accumulator rather than a collector, and my library grows according to a bad Malthusian principle: I buy books geometrically and read them arithmetically, with the most obvious consequences for shelf-space. Furthermore, at my age I should be shedding possessions rather than still accumulating them: but I have this strange reluctance to get rid even of books that I shall never look at again and were no good in the first place.

However, I never buy a book without intending to read it, and intention is, if not nine-tenths of accomplishment, at least some portion of it. And recently, while dithering or leafing through old books that I bought years ago and still have not read, I came across a volume of essays by the literary critic Ivor Brown (above), titled I Commit to the Flames. It was published in 1934, and I was first attracted to it by its opening sentence:

At the time he wrote, of course, book-burning was in full flame in Germany. I suspect that Ivor Brown’s title is a reference to the famous passage in Hume’s Enquiry, in which the great ironist suggested a book-burning far more radical and far-reaching than that of the Nazis:

When we run over libraries … what havoc must we make? If we take in our hand any volume; of divinity or school metaphysics, for instance; let us ask, ‘Does it contain any abstract reasoning concerning quantity or number?’ No. ‘Does it contain any experimental reasoning concerning matter of fact or existence?’ No. Commit it then to the flames; for it can contain nothing but sophistry and illusion.

This passage creates a dilemma for the contemporary iconoclast and statue-demolisher: uncertain as to the ethics of book-burning (unlike Virginia Woolf, say, who in Three Guineas advocated, without Humean irony, the burning down of whole libraries), they must remain in two minds as to whether Hume’s statue in Edinburgh should be pulled down or permitted to remain. In the end, they will probably obey their basic principle: when in doubt, destroy.

But to return to Ivor Brown. Brown (1891–1975) was a well-known literary critic and journalist who wrote seventy-five books of very different kinds and—a man of independent views, and a conscientious objector during the Great War—he was for six years editor of the venerable liberal Sunday newspaper, the Observer. Unlike many of his modern equivalents, however, he was in favour of the maintenance of civilisation and high culture, not because of its snob value but because he thought it was high rather than low. In his view it was free for anyone to enter, which is not the same as saying that it must be entered by people in exact proportion as their characteristics appear in the general population.

No one would claim for I Commit to the Flames (Brown’s flames, I should add, were meant in an entirely metaphoric sense) that it is a great work, seminal as some critics might put it—nowadays, perhaps, ovular. But, published eighty-six years ago, it is particularly interesting at the present conjuncture. I am not sure whether it is reassuring or depressing that our problems recur, not in precisely the same form of course, and our reactions to them are similar though not identical. It is also worth noticing what has changed.

Let me just quote a couple of passages that might be written with very slight alterations today:

My object is to relate all the follies of the day to their common origin. The committers of folly, the authors of the rubbish which I commit to my symbolical flames, have not, in all probability, the wit to understand any general principles of puerility. It needs reason to understand that the source of the trouble is a general flight from reason and from the legacy of civilised opinion in which past reason has been embodied. The world increasingly substitutes fisticuffs for argument, flags and symbols for facts and realities, belief in the omnipotence of the sub-conscious for faith in self-determination of the will by reason guided … it teaches its children that impulse is divine. Consequently it has no standards.

Brown asked a question nearly a century ago now that has surely occurred to many of us:

Why should all acquired knowledge, all human experience, all civilisation be cast aside? It needs sifting, that is acknowledged; but why scrap it? The passion for such root-and-branch abolition invades the arts as well as the schools.

Later, he provides the sketch of an explanation for the radical iconoclasm that he sees in his own time:

It is a commonplace that the person most easy to deceive is the recipient of a higher education that has failed to be high enough. The schooling system of Europe and America had just reached the stage at which it was creating the pseudo-intellectual in very considerable numbers.

What is perhaps more surprising in Brown’s book is that the sensibility behind the Black Lives Matter movement is to be found in it. Brown makes reference to what he thinks is a dishonest overvaluation of blacks, both a reaction against past injustices done to them and a manifestation of a desire to escape from the constraints of an over-refined and developed civilisation.

In 1933, the Tswana chief, who was very pro-British (the British were his protection against the inroads of South Africa) had a white man, Phineas McIntosh, flogged in Bechuanaland because he had assaulted a boy. Brown describes the reaction to the flogging:

Whatever is dark is fair. Could anything have been more typical of the contemporary mind than the fuss made over an African chief who had ordered the flogging of “a poor white”. I do not enter into the politics of the business … what is interesting is the attitude of the chief’s English champions. These were exactly the people who are continually denouncing flogging as a revolting form of punishment. If a white man is flogged by a white man in an English gaol, they scream against barbarism; no doubt rightly, but let that pass. If a white chief had ordered the flogging of a “poor black”, they would have yelled themselves hoarse with indignation at the use of the lash. But when a white man is flogged by blacks, they entirely forget that flogging is a horrible and degrading exercise and cry up the chief as though he were a new species of enlightened reformer. During all the outcry about the treatment of Tshekedi by England [he was overthrown as chief, though he remained very pro-British], there was no admission that the chief had employed a barbarous form of punishment.

The language that Brown employs with regard to blacks certainly shocks the modern person. He uses such expressions as nigger heaven and coon show in a way that would make his book impossible to publish today. Strangely enough, however, he is not actually a racist in the sense that he believes the black man to be inherently inferior or incapable of cultural achievement. He has things just as hard to say about the modernist poets whom he accuses of barbarism (I do not enter, as Brown would have put it, into the correctness of his judgment):

… we have so abased ourselves, we must revere as great poetry the hiccoughs and grunts of dyspeptic young men who have been peering into Bloomsbury basements and have seen some underclothes drying by the fire.

In other words, he judges people by their culture and not by their race, even when he uses terms that strike us now as insensitive and insulting. No one nowadays would advocate the use of the language that he used, that even at the time could hardly have pleased his black readers, if any, and could hardly have been expected to raise the esteem in which black people were held by his other readers. Nevertheless, he was not a racist in the sense that he would despise someone simply because he was black.

But the new Savonarolas of anti-racism would not agree. That Ivor Brown was for six years editor of the Observer, now owned by the Guardian, is surely reason enough to burn down those newspapers’ offices.

Among Anthony Daniels’s recent books is Embargo and Other Stories (Mirabeau Press, 2020), published under his pen-name, Theodore Dalrymple.

Idle Hands and the Devil’s Amusements

The Fading of Scarlet Letters