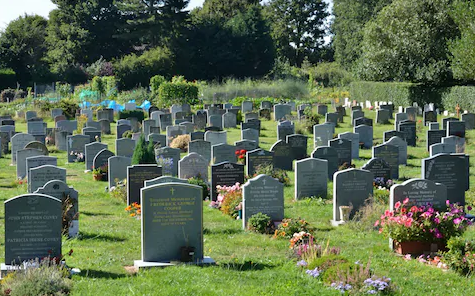 I don’t know why, but ever since I was a child I have loved churchyards and cemeteries. I find them almost as irresistible to enter as bookshops, and when for some reason I pass one without having entered I feel a sense of missed opportunity. Perhaps it is because, like Pip in Great Expectations, I imbue the names and fragments of information inscribed on the tombstones with imaginary information of my own devising. There is nothing, I have found, to stimulate the imagination like a graveyard.

There is, in a sense, no more egalitarian institution than a cemetery. Of course, the tombs are apt to vary in size and grandeur according to the wealth and importance, or self-importance, of the family of the deceased; but the fundamental condition of being the resident of a cemetery, namely being dead, is the same for everyone. One man, one death.

The British were once very good at cemeteries. I know of at least three towns in Britain in which the cemeteries (one of them a churchyard) are by far the most attractive and agreeable places in the whole town, and certainly the best-kept. In one ancient town, turned into a visual hell by criminally-bad British architects, only the municipal cemetery, founded by the Victorians and still intact, provided some aesthetic relief. The cemetery gardener I spoke to said he liked working there because the residents were so well-behaved, something that could not easily be said of the residents of the rest of the town.

In another town, while resident for a few weeks there, I used to walk in the cemetery for pleasure. The Victorian chapels, overhung by yew trees, acted as a kind of balm to soothe my outrage at the surrounding functionalist ugliness. If form follows function, as the modernists claimed, goodness knows what horrible function they imagined that their buildings served.

In this cemetery was a section set aside for the graves of children. There was here a little grave of a child aged two who had died nearly fifty years before. On this grave was a vase with a single fresh flower in it; and two years later, when I visited again, the vase was still there, and still with a fresh flower.

What a wealth of grief and suffering this simple sign suggested, that (I surmise) of a hopeful newlywed couple who perhaps had no further children to comfort them in what must now have been their old age! How small were my daily irritations compared with their grief! What impressed me also was the dignified lack of exhibitionism, that is to say the sincerity, of the gesture, very different from, say, the sensibility (or lack of it) shown in the immediate aftermath of Princess Diana’s death, when extremity of expression was mistaken for depth of feeling.

I have reached an age when many of the buried in almost any cemetery died at an age earlier than my present one, and this, albeit fleetingly and without much practical effect on my subsequent conduct, induces a sense of guilt in me, especially when the deceased was born a number of years after me. Why have I been granted a longer life than they, almost certainly through no merit of my own? But a question that should be salutary, like most salutary questions, never lingers long. It is like confession in Catholicism: it has to be repeated because, however many times and however sincerely we may resolve to go and sin no more, somehow we never quite keep to our resolution. Perhaps that is why I have regularly to visit cemeteries.

Confined in Paris during the late (or perhaps first phase of the) COVID-19 epidemic, I was but a stone’s throw from the Père Lachaise cemetery, where I love to walk. It is probably the cemetery with the highest concentration of famous residents or guests in the world, but during the confinement it was closed to the public, and this was of the greatest frustration to me. So near and yet so far! There seemed to me little logic to the closure of the public places of Paris while it was still permitted to walk in narrow streets. But I have long since given up considering myself the sole arbiter of what is permitted or not permitted to me, so I kept my indignation within limits.

As soon as it re-opened to the public, I went in with the kind of relief that an alcoholic of the good or bad old days of severe licensing restrictions experienced when at long last the doors of the pub opened. I turned to the left, for an old lady of my acquaintance, whose brother had been deported in the last convoys of Jews  before the Liberation, wanted me to take a photograph of the stela erected to the convoy’s memory. Theirs was a bourne from which only a tiny handful of travellers returned (her brother not being among them), and the old lady had spent the last three quarters of a century without knowing what became of him.

A few hundred yards to the left of the entrance nearest my flat is the space of the cemetery that has monuments dedicated to those deported from France to the extermination and concentration camps of Nazi Germany. Strange to relate, this appalling subject has inspired modern sculptors to produce works of great expressive power, when the great majority of public monuments, in France as elsewhere, are of minimal artistic quality, to put it kindly. Perhaps Adorno, who famously (but erroneously) said that after Auschwitz there could be no more poetry, might have been nearer the mark if he had said that after Auschwitz there could be no more sculpture—though not because of Auschwitz, but for reasons internal to the history of art.

The monuments to the departed are next to what I call Communist Corner. Here are interred communist leaders such as Maurice Thorez and Georges Marchais, as well as members of the party’s literary wing (their communist affiliations did not prevent them from being good poets), such as Paul Éluard and Louis Aragon. The whole area has a faded feel as if communism, once the opium of the French intelligentsia, is now as irremediably and harmlessly old-fashioned as patchouli or antimacassars. The Party, however, had its lists of people to be deported or eliminated, if it ever came to power. The question for it was not that of deportation or elimination as such, but of who was deporting or eliminating whom, a true example of the dialectic at work.

Oddly enough, by far the most be-flowered tomb in the cemetery is that of Alan Kardec, real name Hippolyte Léon Denizard Rivail, of whom I had not heard prior to my frequent promenades in the cemetery. He was a nineteenth-century French spiritist who took his pen-name from a suggestion by a spirit with which, or with whom, he was in contact. He has a particularly strong contemporary following in Brazil, numbering I believe in the millions, and it is mainly Brazilians who tend the tomb.

The care of Kardec and neglect of communists reminds me of a second-hand bookshop I once patronised, owned by a Marxist of the Enver Hoxha (Albanian) faction. It was always a matter of great chagrin to him that his customers were more interested in Bibles and books about spiritualism than they were in the memoirs of Enver Hoxha or the Marxist “classics” like A Short History of the CPSU or Materialism and Empirio-Criticism. I suppose he would have been deeply disappointed by Père Lachaise, with its evidence of the false consciousness to which the masses are liable, rating Kardec over Thorez.

Alas, I have to report something which is not entirely creditable to human nature, at any rate in its contemporary form. A wave of thefts has occurred in the cemetery, with people carrying off funerary ornaments, stone crosses, busts, bas-reliefs, memorial slabs and so forth. Presumably they want them for ornaments in their own gardens, or maybe the marble slabs for kitchen islands. Perhaps there is a black market for them.

In the annals of crime, no doubt, these thefts count as minor; most of the tombs from which they occur are no longer tended carefully by descendants of the deceased. In that sense, no one, or no one specific, is a victim of them. And yet the thefts, from graves, tombstones and mausolea, make my heart sink. There is no linear measurement of human depravity.

Among Anthony Daniels’s recent books is In Praise of Folly: The Blind-Spots of Our Mind (Gibson Square, 2019), published under his pen-name, Theodore Dalrymple

4 thoughts on “The Sincerity of a Single Fresh Flower”