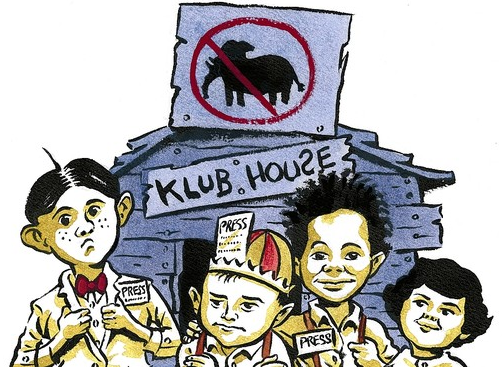 Watergate destroyed the presidency of Richard M. Nixon. It may also have done a similar job on modern journalism.

Prior to Watergate, journalism was mostly a procedural affair. Journalists were a delivery system between things that happened and people learning about those things. After Watergate—as noble as was the cause pursued by Washington Post reporters Bob Woodward and Carl Bernstein—matters shifted. Journalism made things happen.

In Watergate’s specific case, they made a US president resign after his various crooked antics were exposed. Quite why Nixon went to such lengths to crush his Democrat opponents remains something of a mystery; after all, Nixon prevailed in the 1972 election by forty-nine states to one. The Democrats weren’t exactly putting up much of a fight.

In any case, Watergate and the subsequent celebration of Woodward and Bernstein led to a shift in journalistic aims. We still see the result of that shift today. Journalism courses in the US, UK and Australia focus on causes, struggles and Speaking Truth to Power. As opposed, I guess, to the previous model of simply Speaking Truth.

This probably wouldn’t have been such a negative outcome if post-Watergate journalism hadn’t demanded its adherents follow the original Watergate design. To qualify as genuine Watergate-level truth-telling, the target must fit the Nixon template: white, conservative, Western and presumed evil. Problem is, not too many Western conservative leaders who followed Nixon offered his level of criminal qualities.

So left-leaning journalists of recent decades perform a cute little two-step. First they demonise their targeted white conservative as a wicked Nixon figure, and then they commence what they imagine to be an honourable Watergate-style destruction of that target.

Every single Republican president in the US since Nixon has endured this treatment. Even the likes of genial patrician elder George H.W. Bush was vilified as corrupt. Ronald Reagan was expected by his media foes to bring about nuclear war. Instead, he did more than any US president to reduce the prospect of such a catastrophe. George W. Bush was simultaneously presented as an atrocious dunce and a genius of such accomplishment that he could, as some of his wilder critics claim, have been the engineer of September 11’s terror attacks.

In Australia, Mamamia founder Mia Freedman ended a distraught piece on Trump’s election with Lifeline’s suicide advice number. Seriously. Mia apparently expected that Australians might be moved to end their lives because Trump had become the forty-fifth president of the United States.

Also in Australia, we have witnessed the repeated Nixoning of conservative leaders. Especially during the early Iraq War years, John Howard became a figure of extraordinary leftist loathing. Support for Howard was taken as an indication of an individual’s fondness for choking toddlers and kicking puppy dogs into traffic.

This Nixoning led to profound errors of electoral judgment. A Fairfax friend won an office-wide 2004 betting competition at the Sydney Morning Herald not by forecasting Howard’s massive win, but because her predicted winning margin for Labor’s Mark Latham was the narrowest.

In certain circles, support for our second-longest-serving prime minister simply could not be mentioned. During a ritual Howard-hating session following that election among various theatre types, one took me aside and whispered, as though confessing she’d revealed Anne Frank’s hiding place: “I voted for him. Tell no one!”

The pity of all this is that any number of figures and causes far more wicked than Nixon have presented themselves in the years since 1974—and all of them would have allowed modern journalists to show how genuinely committed are they to confronting evil. Alas, these figures and causes are not white, Western and conservative. So they get an easy run.

In 2006, a Danish magazine published a series of illustrations satirising Mohammed. This aroused some discontent on what was then referred to as the “Arab street”, and revealed astonishing timidity in Western media. Few newspapers, magazines or television stations dared reproduce the forbidden images. I did, at my website, which drew the Sydney Morning Herald’s attention.

They needed an image to accompany their story, of course. So, instead of running even a single one of the twelve Danish cartoons, they ran one of me. Still, at least the ABC—in a rare moment of respect for freedom of speech over tyranny—actually ran a positive item about the issue on Media Watch. “The Australian media’s decision to hold back publication,” said then-host Monica Attard, “is much more about practicality than principle.”

Had Woodward and Bernstein been more about practicality than principle, they would have never pursued with such vigour their Watergate scoop. Which brings us to the current situation involving China’s communist dictatorship and the coronavirus, which as this is written has killed nearly 300,000 people.

If ever there was a time for journalism to find its Truth to Power feet, this is it. But no. Rather than pursue China’s murderous tyranny, leftist media outlets are covering for China while attacking Donald Trump—who fits the white, Western, conservative model dictated by Watergate.

Here’s CNN’s tweeted effort to applaud Chinese communism’s core decency: “China has given a point-by-point rebuttal of the 24 ‘preposterous allegations and lies’ that it said were fabricated by US politicians and media outlets to ‘shift the blame to China for their inadequate response to Covid-19’.”

At which point CNN reverted to its round-the-clock Trump assaults. They, along with all of the leftist Western press, see Trump—and Boris Johnson, and Scott Morrison—as their 2020 Nixons.

Likewise the painted line provided for marathon runners in the 2000 Sydney Olympics, which was only obscured some time afterwards because drivers kept mistaking it for a lane direction. They’d end up peeling off the elevated section of the Cahill Expressway towards the CBD instead of darting through a tunnel leading to Woolloomooloo.

Well, I did, anyway. More than once.

Shift things up several levels, towards the tragedy end of the dial. Decades after Cyclone Tracy tore through Darwin in December 1974, you could still find twisted sheets of sheet-metal roofing lodged in trees. At a higher level of tragedy still, more than 70,000 London buildings were obliterated during Germany’s Second World War bombing raids. A further 1.7 million buildings were damaged.

As a testament to and in remembrance of the nearly 30,000 people killed in those raids, some of that damage has been preserved in London and elsewhere. St Luke’s Church in Liverpool is today exactly as it was after German bombs blasted it to pieces in 1941, save for vegetation now growing on the exposed interior walls.

The scarring caused by a pandemic tends to be emotional rather than structural, however. There is very little physical evidence of Australia’s 1919 Spanish flu crisis. For Australians who lost 15,000 family members and friends, scarring was internal and eternal. Evidence of that brutal episode exists in memories and on gravestones, not in ruined buildings.

Australia has thankfully been spared a repeat, one century later, of that pandemic’s hideous toll. Yet for hundreds of Australian families, the first half of 2020 will forever be marked by suffering. And some decades from now we may still find physical signs of our coronavirus ordeal.

In time, the protective checkout screens and distancing-urging floor signs asking us to “please stand here” will vanish from city supermarkets. I’ll bet, though, that shoppers in regional Australia will still be walking over whatever remains of those adhesive safety directives by 2030 or so. Perhaps even a few screens will be fixed in place, transparent reminders of our contagion era.

It could be that stocks of panic-bought toilet paper will be found in houses auctioned a decade from today. The embarrassment of their purchasers might last a few years longer. It definitely should, at any rate.

There could also be positive physical signs. Imagine Australia twenty years from now as a prosperous global trading entity. On cans and boxes in supermarkets, and on cars, building materials and household appliances, are printed the words: “Made in Australia”, “Made in India”, “Made in the United States”, “Made in Great Britain”, “Made in Taiwan” and “Made in South Korea”.

And in the best possible way of recalling a time when the world stood up to a deadly menace, we might find products labelled: “Made in Liberated China”.

On Bended Knee, Especially in Victoria