The Missing Voice of the Country Party 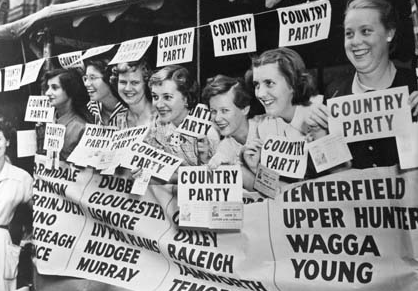 Billy McMahon was an unprepossessing prime minister until his defeat by an ALP headed by Gough Whitlam in 1972. He was slight of build, had a high voice, and when he inspected the Australian troops stationed in Malaysia he turned up in a dark-pink knitted safari suit. “Here comes Billy in drag,” remarked the correspondent of the Age, Alan Barnes.

The leader of the other half of the Coalition government, Doug Anthony, was an impressive farmer and a fine upstanding Country Party member. Supporters would slap him on the back and tell him that he should be prime minister instead of Billy. So he changed his party’s name to the National Party, and set it on an unfortunate course for which the nation, the bush, the Liberals, Senator Bridget McKenzie and the Prime Minister Scott Morrison are paying a price today.

The Nationals said goodbye to the bush and became a party of small business in country towns. Until she stood down at the last election, my wife, Pru Goward, was the only farmer in the New South Wales cabinet. She knew what it was like to yard cattle in rough country on the Monaro, and to work quite wild stock when they were finally in. She stopped playing an active part on the farm when she became a state member thirteen years ago, but she was a voice for the bush during her eight years in cabinet.

Billy McMahon had presided over a country with 2 per cent inflation and 2 per cent unemployment that produced the world’s cheapest steel. No prime minister since has ever got anywhere near that. Inflation and unemployment under the charismatic, witty, erudite Gough Whitlam zoomed up in no time at all. John Howard and Peter Costello got them down to 5 per cent, but it took years.

The bush had a voice at federal level when Malcolm Fraser was prime minister and Doug Anthony was his deputy, but it disappeared when Tim Fischer, a pacifist, became leader of the National Party and when Howard reacted to the Port Arthur massacre of thirty-five tourists with restrictive gun control measures that equated firearm ownership with criminality. Firearms had to be locked in a steel safe, with ammunition stored in a second locked steel safe.

The uncannily realistic BBC television series Yes, Prime Minister had a scene in which a backbencher argued for a grant to save Badger’s Wood. Jim Hacker was scornful. There wouldn’t be thirty people who would care, he pointed out. “That’s my majority: thirty,” she said. She got what she wanted.

That’s the way it usually works, but not always. Malcolm Fraser received delegations from uranium miners in the Northern Territory and from dockyard workers in Newcastle concerned about job security, and gave them assurances. If any of them ever voted Liberal they would have kept it a secret. Fraser made his decision on the merits of their case.

The other way to achieve what you want is by holding the balance of power. The Tasmanian independent, and notable Catholic, Senator Brian Harradine was a master in his day. He got what he wanted not by bluntly spelling it out, but through carefully phrased allusion. Fighting tooth and nail in parliament and during election campaigns is not the way to wheedle money out of a government when your side loses.

Apart from such considerations it is the responsibility of local members to secure grants for worthy causes in their electorates, expanding hospitals, playgrounds for little kids and skateboard rinks for bigger kids. There is no end to it. That’s what Bridget McKenzie was doing when she identified gun clubs that could do with improved facilities. I’ve never seen one that didn’t.

Scott Morrison cannot be faulted for the way he has handled the coronavirus outbreak so far, but he wasn’t too good on drought and bushfires, with the National Party having refocused on small business. Morrison and members of his government can see and feel the risks posed by the virus. The drought and the bushfires are different.

As city people they don’t empathise with the bush, as would Tony Abbott, were he still prime minister. Today he is a volunteer firefighter and the deputy captain of his brigade. He would not have taken his family on a Hawaiian holiday at the height of the fires, and having done so, he would not have tried to keep it a secret. Putting it at its lowest, holidaying in Hawaii gave the media the opportunity to turn on Morrison. When the realisation came, Morrison acted. He sent the navy to evacuate people driven into the eastern corner of Victoria and called up reservists to pitch in. It was belated.

The rural crisis lingers, but what we hear about from the government is the plight of business in country towns, hard hit because the farmers that the Country Party once cared for don’t have money to spend in the towns. That’s too bad. The $17 billion fiscal package that Morrison announced in March doesn’t mention the rural sector. Perhaps when details emerge there will be measures to help farmers recover sufficiently to spend money in the main streets of our towns and villages.

Since the condolence motions in parliament, there has been no mention of the plight of the widows of the volunteer firefighters and their fatherless children, but there are matters one would like to know more about. The Red Cross, the Salvation Army and St Vincent de Paul received donations to help the bush. How much did they raise and what have they done with those donations? The Red Cross regarded themselves as needy and worthy, and had to be leaned on. They managed to hang on to $10 million.

Those donations to the Salvos and Vinnies must also run into millions. There is no known public accounting of what they have done with those donations. Has any gone to the widows of the twenty-three volunteer firefighters who died in the flames? Those widows face a tough life bringing up their fatherless children. A scholarship fund would be helpful for starters.

Once upon a time there were formidable Country Party members with strong voices. Jack McEwen blocked McMahon’s accession to the prime ministership after Harold Holt drowned. McEwen and Doug Anthony settled on John Gorton, a Liberal senator who had to be found a lower house seat. This was duly done, and the dashing former airman became prime minister.

Gorton was a Second World War fighter pilot whose face was bashed up on the dashboard of his Kittyhawk when he was shot down. He had plans to establish a nuclear power plant on Commonwealth territory at Jervis Bay but was howled down, and eventually forced out of office. McEwen lifted his veto on McMahon. In the 1972 election the Country Party held its twenty seats but the Liberals lost enough to put the ALP in and make Whitlam prime minister.

The Country Party could make mistakes, but lack of loyalty was not one of them. Had Doug Anthony still been around, Morrison would not have hung his Agriculture Minister, Bridget McKenzie, out to dry for proposing grants to gun clubs, which was described by the ABC and the media more generally as a scandal and a rort.

The gun clubs are timber or fibro, roofed with galvanised iron, with maybe a power point for a kettle to make a cup of tea. Every other club, whether it be a bowling club, a football club, a soldiers’ club or a workers’ club, is a substantial brick building with a kitchen, dining rooms, toilets, and the capacity to cater for receptions.

The decision to dump McKenzie would appear to have been made without any consideration of the merits, as a reaction to ALP attacks in parliament, and without the loyalty that was second nature in the Fraser years and the Anthony years. She was treated unjustly. She got a raw deal that would have been unimaginable before the Country Party became a party run by shopkeepers.

There is nothing to indicate that Michael McCormack or Barnaby Joyce, the leader and deputy leader of the National Party, made any effort to save McKenzie, whose offence was an embarrassment, not a sin or a crime. Morrison, McCormack and Joyce committed the greater offence by far of disloyalty. Morrison does not seem to be aware of the enormous economic contribution the rural sector makes, or of the cost of drought and bushfire. It is not only the plight of individuals but also the impact on national prosperity, on exports and the country’s earnings, and on supermarket shelves.

I learned to shoot with a camera taking pictures of wildlife in Africa, and joined gun clubs when I began farming fifty years ago. Members of gun clubs have won Olympic medals, and improving their amenities is as worthy as all the other grants that make life better.

McKenzie leaves the ministry with a strong sense of injustice and betrayal. It would not have happened if Malcolm Fraser, Doug Anthony and their colleagues of those days were still on the scene. And another thing: the Country Party held its seats when the political pendulum swung.

David Barnett, a former journalist, is the author of John Howard: Prime Minister

2 thoughts on “The Missing Voice of the Country Party”