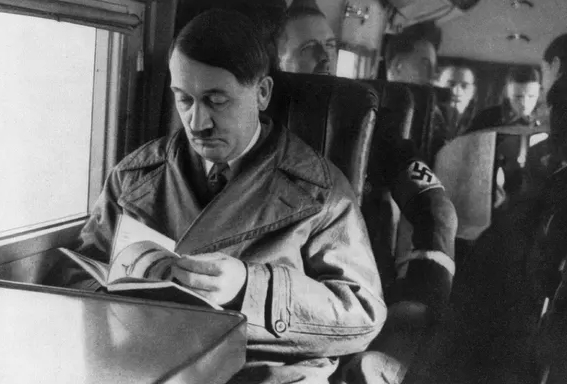 Writing another biography of Adolf Hitler, as horrifying as it necessarily is, is rather like discussing the weather with total strangers at a bus stop: anything said is likely to be self-evident and clichéd. Given the many hundreds of biographical works about the Führer, which often simply restate what is common knowledge, it is extraordinarily difficult. Yet Brendan Simms, Professor of the History of International Relations at Cambridge, who has written on modern European history, manages this demanding task in this massive book. His thesis is that Hitler’s main preoccupation was not with Bolshevism in Russia, but with the plutocratic international finance capitalism dominant in Britain and America. Simms has done a monumental amount of original research, and has unearthed dozens of pertinent quotations to back up his thesis, most either unknown or given no prominence by previous historians.

According to him, Hitler was intensely jealous of the United States and the British Empire, successful rivals to Germany, which were characterised by much higher ratios of territory to population than Germany. To match these two superpowers was the principal reason why Hitler invaded Russia in 1941 and began exterminating or exiling its non-Aryan populations. Simms makes an extended case for his thesis in the context of a rather good general biography of the German dictator, providing many previously unknown details. Whatever one might think of whether Simms is actually correct—his thesis is obviously controversial and will not be universally accepted—it is a challenging one which deserves to be taken seriously. Certainly he has made a strong case that Hitler had far more to say about America than is normally highlighted in most previous biographies: for instance how a disproportionate percentage of America’s population consisted of German emigrants who were lost to their Fatherland while making successful lives in the New World.

Probably the main omission from Simms’s discussion is any examination of Hitler’s attitude to capitalism and capitalists in Nazi Germany itself—a topic also strangely neglected in works by other historians. Hitler rid Germany of its Jewish and anti-Nazi capitalists, and had no love for wealthy former aristocrats, but his attitude towards well-established Aryan German industrialists and bankers, like the Krupps and the Haniels, is an under-explored topic. Comparing and contrasting Hitler’s views on them with his alleged hostility to the Anglo-American plutocracy would have been a significant addition to Simms’s work.

In considering the beliefs and career of Adolf Hitler, and bearing in mind that many are probably beyond rational explanation, a number of important points might be made about the Führer that do not appear to have been previously emphasised. One striking characteristic is that he habitually thought in terms of long periods of history, and possessed a surprisingly wide and not unintelligent knowledge of historical events and processes; his recorded remarks on history were often original and perceptive, albeit always in an autodidactical way. Amazingly, Hitler owned a private library of 16,000 books, and spent many of his evenings alone, reading. (See Timothy Ryback, Hitler’s Private Library, published in 2008.) Hitler’s views on German and Aryan “destiny” were supported by historical references drawn from thousands of years of history, as well as from contemporary demography and sociology.

At the other end of the political spectrum, Marxist “dialectical materialism” also emphasised long epochs of history, stable except for the occasional revolutionary break and the ushering in of a new age. Although Joseph Stalin is normally seen as the embodiment of crudity, strangely enough in his erudition and wide knowledge he may have outdone Hitler, owning a private library of 25,000 books, annotating thousands of pages as, in the words of one commentator, a “voracious reader”. Stalin was something of an expert on Dostoevsky, whose works he read in prison in Siberia, and which were said to influence his later attitude towards terrorising the population. In contrast, most political leaders at the time in the democracies—with Churchill being the obvious exception—derived their historical knowledge from school textbooks and common knowledge. What the long historical perspective of Hitler and Stalin directly implied was the utter unimportance of the individual person—apart from the rare national or revolutionary leader—who were simply the products of their race or class, and whose deaths, even in great numbers, were simply an inevitable part of larger historical forces.

The second factor in coming to terms with Hitler’s worldview is that his thought patterns and expressed beliefs were the products of what might be termed demented free-floating paranoia. This may seem self-evident, but the point is that in his conversations with associates and in his speeches, he habitually went from subject to subject, ranging across space as well as time. One reason that the “Anglo-Saxons” loomed large in his worldview is that once he exhausted what he had to say about Europe, he would travel around the globe, putting his theories about realms outside of Germany. Some subjects were ever-recurring, of course, the most fixed and permanent, needless to say, being his anti-Semitism, which was always central to him and undeviating.

No one has satisfactorily explained Hitler’s hostility to the Jews, which must have been rooted in deep-seated psychological factors, perhaps in a suspicion that he was of partially Jewish descent, and which was clearly paranoid, in that the Jews did not, by any rational criteria, have the powers he attributed to them. For instance, the economic elite of the United States, whose unparalleled wealth emerged after the Civil War, overwhelmingly consisted of Anglo-Saxon Protestants—Rockefeller, Ford, Carnegie, Morgan, Vanderbilt, Mellon—with hardly a single Jewish (or Catholic) member. Similarly, Jews were also virtually absent from America’s political elite. Despite these demonstrable facts, Hitler saw Jewish “power” everywhere, ranging the world to expound on the places they invariably controlled.

The third recurring feature of Hitler’s worldview might best be summarised by noting that he exhibited what can best be described as a “death wish”, especially after about 1940. Many of Hitler’s actions after he took power in 1933 were widely seen by commentators abroad as those of a gambler; he once referred to himself as a “sleepwalker”, who took drastic measures without the rational clarity of daylight. After about 1940, his actions often seemed those of a madman—which, of course, he was widely regarded as being. That Hitler was driven by a “death wish” was argued in an excellent 1993 study by Robert G.L. Waite, an American psycho-historian, The Psychopathic God: Adolf Hitler. Normally, psychological analyses of historical figures are likely to be dubious, but here Waite appears to have been spot-on. Probably Hitler’s most egregious single decision was to declare war on the United States on December 11, 1941, four days after Pearl Harbor. Under the existing treaty between the two countries, Germany was obliged to declare war on any nation which attacked Japan. “This is not what happened at Pearl Harbor” is Waite’s wry comment. Hitler now found himself at war with the three most powerful entities in the world: the United States, the Soviet Union and the British Empire.

Hitler was personally aware of America’s vast power, having directly fought American soldiers in France in 1918. The United States entered the First World War in April 1917 with no troops at all in France, and only a tiny standing army. By the Armistice in November 1918, the United States actually had more soldiers in France (1,867,623) than did Britain (1,859,246), and was in the process of building up an army of four million men which, had the war lasted until 1919—as most expected—would, by itself, have invaded Germany and defeated it. By declaring war against the United States, Hitler was almost literally signing his own death warrant, bringing into the war a great power with an almost unlimited resource and population base. Hitler declared war without having any means of defeating, or even directly attacking, the United States, probably the only time he declared war against a nation he could not possibly defeat. Fortunately for Germany, it surrendered in May 1945, avoiding by a few months the prospect of the Führerbunker being vaporised by an atomic bomb, first tested two months later.

What is arguably the central question of twentieth-century European history is a simple one: how was it that the two most powerful nations in the Continent were ruled simultaneously by genocidal maniacs? The best answer to this question is also a simple one: because the elite structure of Central and Eastern Europe collapsed as a result of the First World War, and the victors in the ensuing struggle for national leadership were prime human examples of the Darwinian struggle for supremacy, the survival of the most ruthless. Both before and after the Age of Totalitarianism, “normal” politics was the rule throughout Europe, as it had always been throughout the English-speaking world. This at least makes it likely that we will peacefully live out the decades necessary to read the thousands of biographies of Adolf Hitler.

William D. Rubinstein held chairs of history at Deakin University and at the University of Wales. He reviewed Debunking Howard Zinn by Mary Grabar in the April issue.

5 thoughts on “The Hitler Worldview”

Eyes Upon Some Inner Thing