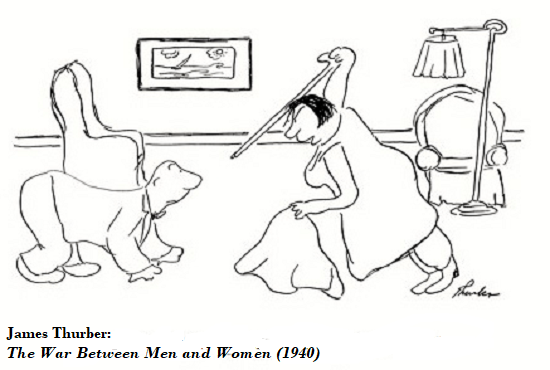 Do men have feelings? Are they in touch with them? The belief that men aren’t in touch with whatever feelings they have, while women are in touch with theirs, is central to a Western understanding of maleness and femaleness. It’s one of those truths that, while no longer fashionable, is true enough whenever it’s needed to demonstrate this, that or whatever. Before female heroes with male characteristics were mandated by feminism and Hollywood, the ability to resist the siren call of women’s feelings was a characteristic of the male hero.

The belief was central to the Classical understanding of nature—the Correspondence theory of truth—where human nature and the natural order correspond. Each thing with an independent existence, say an apple or an orange, had attributes, qualities, essences necessary to their function or identity, without which they couldn’t be an apple or an orange. Gender essentialism is assigning masculine essences to males and feminine essences to females, assuming these are in some way grounded in nature as biological reality. Essences describe what’s innate or essential to any meaning given to an apple or orange, man or woman. Essentialism provided a rationale for taxonomy—the science of classification—at least until Darwin. It’s still normative, in those corners of the sciences where distinguishing between categories—apples and oranges, men and women—is still a requirement of sound methodology, although non-essentialist feminists don’t believe females have essences.

At some point, this theory was gendered by biological sex; males were linked with reason (the head); females were linked with feelings (the heart). Until recently, feminine intuition was construed as non-rational, therefore difficult to understand. At best, it was a balance, a corrective to male rationality. At worst, it was a recipe for chaos, an excuse for excluding females from the ordered male world. While these analogies are crude, and culturally determined, they endured for millennia.

According to Freud’s theory of mind, the psyche is also composed of three parts: conscious, unconscious and preconscious. While influential, Freud’s theory is derived from Plato’s. It’s metapsychological, which means it’s neither verifiable nor falsifiable in scientific terms. It’s opposed by the current hegemony of feminine–feminist psychology, which is a reaction against Freudian and other male-dominated views of women.

If maleness and femaleness are neither verifiable nor falsifiable in scientific terms, how can they be measured? What truth-claims can they be assigned in a world where the truth-claims of science take precedence? What happens when some sciences are driven by political imperatives or the need to create evidence for ideological agendas? This can be seen in climate science, essentially about ideologically motivated data modelling, and transgender science, essentially about creating evidence to support leftist ideology and behavioural contagion. These are the elephants in the rooms of feminised workforces—psychology, education, the law—where ideology and leftism are expressed in policy and legislated in practice.

In the law, for example, the burden of proof once meant “beyond reasonable doubt” but now means “not impossible”. At the Kavanaugh Senate hearing, Christine Blasey Ford, a professor of psychology who designs statistical models for research projects, was able to speak confidently about the brain science of remembering trauma, but was unable to remember when and where her sexual assault occurred, how she got to the party, or how she got home. Although her uncorroborated testimony was rejected she was thought a credible witness and has since received awards for courage. At the trial of George Pell, the verdict also rested on the perceived credibility of the uncorroborated witness rather than the remote probability of the assault occurring. The Kavanaugh Senate hearing and Pell trial are watershed moments in judicial politicisation; case studies of the feminist and leftist shift from “beyond reasonable doubt” to “not impossible”.

Then there’s Aspergers syndrome, which got its diagnostic code in 1994 but lost it less than twenty years later in 2013. By that time, the syndrome had gone the way of the Oedipus complex; popularised and randomly assigned by non-professionals. Since then, symptomatic individuals are included in the autism spectrum. What if anything can be made of the fact that the diagnosed are mainly male and the diagnosers are mainly female?

Aspergers is construed as a lack of non-verbal communication skills and an inability to understand the feelings of others. If most women know many men with symptoms, is that not because all such diagnoses now incorporate woman’s desire to read man’s mind, her frustration at his inability to read hers, and her newly-acquired power and influence in the diagnostic process? In this female future, does sound evidence still matter?

As the psychological and social science workforces become more feminised, their definition of evidence changes. This is true of qualitative research, which measures feelings. It’s useful when supporting quantitative research but means little by itself and is difficult to do well methodologically. It’s also true of psychometric tests originating in metapsychology: hence the disappearance of the Myers-Briggs personality indicator.

It’s a statistical fact that males are significantly more likely to be diagnosed on the autism spectrum than females. That doesn’t explain whether the phenomenon is caused by nature or nurture, although it does suggest males and females are different biologically, so feminists who promote extreme social constructionism are wrong. We live in a culture happy to diagnose Aspergers in males with a lack of non-verbal communication skills, and an inability to understand the feelings of others, because this fits in with current biases against masculinity. That same culture is unhappy about diagnosing females with anything politically incorrect which might challenge the constructionist, social-science biases of feminism.

Are biases wrong? In Truth and Method (1960), Hans-Georg Gadamer suggests that human nature is defined by prejudice. Some prejudices are true, others are false, and it’s the task of reason to distinguish legitimate prejudices from illegitimate ones. The question then becomes focused on rationality. Do males and females experience rationality differently? How is rationality performed in the constructionist environment of feminist hegemony? Does attitudinal, qualitative research, widespread in the female-dominated psychological and social sciences, answer the questions that need answering about rationality? The problem with qualitative research is not only its methodologies and sampling procedures, but the way they’re used, and the lowly position they command in the evidence hierarchy.

As women come to dominate more and more workforces, because the future is female, care is needed when prosecuting feminist demands, because all eyes are on the aspirational female, who is given the benefit of every doubt. One of the most confronting spectacles in recent years was watching a mob of women—deranged by #MeToo—screaming while pounding the doors of the US Senate during the Kavanaugh hearing, demanding the blood of Trump’s nominee, threatening to tear down patriarchy if they didn’t get their way. Many viewers must have wondered which is worse—life in a world man has built up, or life in a world woman is tearing down on her journey into whomever she wants to be or thinks she is. Regardless of whether it’s equality of opportunity, or equality of outcome, there must be better ways to win the hearts-and-minds campaign than mindlessly modelling Handmaid’s Tale costumes while trying not to look like collaborators.

Answers to many questions can be found in Jane Austen’s novels, as she explores the quid pro quo between men and women. In theory, women don’t need men. They have access to a menu of choices not available to Austen, who took the truth of male and female complementarity for granted. In practice, women still need their quid pro quo with men, because the life they can lead without men is somewhat limited.

Michael Giffin is a priest in the Anglican Diocese of Sydney. He wrote “The Strange Death of Woman” in the March issue.