To the Sacred Isles 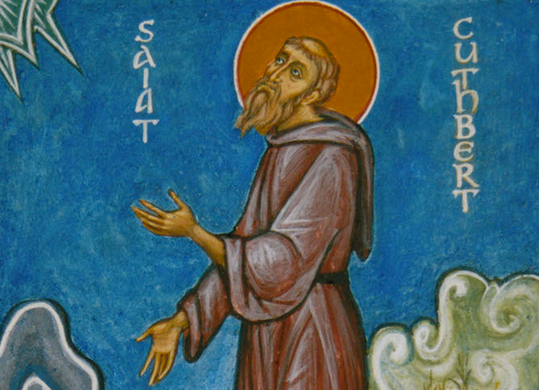 This is a book for lovers of Britain’s ancient and sacred offshore islands that are attached umbilically to the coastline by tidal causeways or traversable narrow channels; so count me in there.

Such islands are special places in which to make spiritual contemplations, which is why Alistair Moffat has made this long overland journey to Lindisfarne. His search for contemporary meaning is laid bare as his biblical threescore years and ten approach. A typically secular product of the ITV/BBC television culture, he’s worried about where he currently stands in life. Should he be financially better off than he is? Everything’s getting so expensive. Suppose he’d kept his secure job twenty years ago as a salaried television presenter, rather than forging out on his own as a writer? Has it all been worth it? What should he do now, as the deepening sense of his own mortality intrudes? The result is a shriving of sorts, with St Cuthbert, the doyen seventh-century saint of the north, appearing throughout as a spiritual motif for Moffat’s quest both during his journey and at its destination.

Such islands are not uncommon. When it comes to Celtic-tinged islands that parallel the tidal and sacred Lindisfarne near Bamburgh Castle in England’s high north-east, think of Mount St Michael in Cornwall (and its French namesake in Normandy), or Columba’s sacred island of Iona off Mull in the Southern Hebrides, or Omey and Holy Inishkeel, off the wild western coast of Ireland, or the granddaddy of the Welsh offshore haunts, the Druidic island of Mona, now called Anglesey.

These places of liminality, on the “edge” of reality, are so often numinous, beautifully sited and invested with meaning by their ages of human occupation. They are redolent of the past, of spiritual searching, echoing the timelessness of the human condition. They offer immortality via continuity, in cultural linkage if in no other thing, and it is this that Alistair Moffat is bringing to the table in what seems to be his swansong for the oeuvre of Scottish and Borders country history and travels that he has made his own and captured so well, and dare I say so frequently (in twenty-four or more books), as a historian of a certain type.

Moffat’s previous books predominantly deal with those unknown ages before written history, when a listener to the land is needed to interpret the tale. Moffat has made his name as such a listener, cueing into place names and legends, folklore and folk memories, seeing landscapes and seaways as texts in themselves, to be interpreted through a fossilised toponymy, acting as signposts on a crossways or watermarks on a map. In this type of historical arena, where few other sources are available, those that do exist provide at best only the briefest outlines of people and events as a starting point.

Around these hints and traces, Moffat’s work has notably reconstructed some ancient kingdoms: the Brythonnic kingdoms of the Borders areas in the immediate post-Roman period and the sea kingdoms of the Dark Ages that once ran down the western coast of Scotland to the Isle of Man and other areas around the Irish Sea. His histories are often told via journeys. Of late, he has also moved into telling the genetic story of the various migrations behind it all, the peopling of Scotland itself. In all of his books, including this one on Lindisfarne, Moffat has never lost the sense of the personal, that he is writing the history of his own people, his ancestors, indeed often of his own family. The folkways and folklore that he grew up with imbue his work, which is popular in form, scholarly enough, but not academic.

With this as his background, in this latest book Moffat ventures along the 100 kilometres of St Cuthbert’s Way, reprising the supposed route the saint took in the seventh century from his original abbey of Melrose to settle eventually as abbot of the monastery on the causewayed island of Lindisfarne. The first half of the book interweaves Moffat’s journey with Cuthbert’s, where much has to be speculated, as Cuthbert’s actual path is uncertain and peters out in places. We are, however, as compensation offered some interesting places in which to sit and contemplate the Scottish lowlands with a vista of the three Eildon Hills and the great rise of Arthur’s Seat near Edinburgh in the distance.

Readers of Moffat’s previous works will encounter in this new one a degree of repetition that can become tedious, although fresh insights are introduced about Cuthbert’s extensive reach, where two ancient sacred caves now bear his name. To flesh things out in the rather insubstantial pageant of Cuthbert’s journey, Moffat has gone beyond speculation, of which there is enough, transferring to introspection of himself and his motives. He also turns to rueful comedy. We thus get an amusing account of some of the difficulties on the pathway, especially about fording ancient rivers when the fords have vanished, made all the more confronting when such things have to be done with your sixty-seven-year-old bad leg and back.

With regard to Cuthbert, the second half of the book treads on firmer historical ground. It deals with Cuthbert’s life on Lindisfarne, where the narrative turns to Cuthbert’s administrative skills in negotiating the tricky shoals of the Synod of Whitby in 665 and its aftermath. From what is now called Holy Island, St Cuthbert advised Dark Age kings at nearby Bamburgh about better and more Roman-approved Christian conduct. We learn that two holy bishops who could not cope with the new Romanised regime introduced by the synod fled back to St Columba’s still Celtic-tolerant Iona, opening an opportunity for Cuthbert to become Lindisfarne’s abbot, whereupon he began an outreach program to the region’s backsliding Celtic Christians and outright pagans, aligning their future firmly within the ambit of Rome.

One thus begins to comprehend the historical impact of Cuthbert’s name and the reasons behind its transfer into legend. The synod destroyed the last vestiges of the pagan religious past that lingered in Celtic Christianity’s older Easter tables and the Druidic tonsure of shaven forehead and ponytail. And there were doubtless many unsung other features that were quietly demolished. One attested element mentioned by Moffat seems unusual indeed at this time: a nobleman’s grave contained the body of a woman clearly sacrificed to lie in eternity with the dead man. Heathenism still lived.

As with all of the early movers and shakers in the Christianisation process, various legends have since accreted to Cuthbert’s name. Two are notable. The first concerns his extreme asceticism, which may have been the case, although it does seem exaggerated beyond the human capacity for endurance or way past some sea animals’ capacity for empathy. Cuthbert is a saint particularly noted for tormenting his flesh by standing for punishing hours in the cold waters of the island, his feet later warmed by two helpful otters. It is this aura of holiness that attracts the questing Moffat.

What can we learn, he asks, from Cuthbert’s acceptance of the harshness of life, from his ability to both engage and disengage with the material world of politics and power, and especially from his courage in facing the inevitability of his death in miserable circumstances in his lonely hermitage on barren Farne Island, a stone’s throw from Lindisfarne and a step closer to eternity? For our author seeks to learn “how to die” as he peers over the peak of the biblical diktat of years and comes face to face with his own mortality. His process of self-discovery and investigation pervades the second part of this book, after the causeway has been successfully breached and the island taken once again.

Part Two begins by reprising Moffat’s earliest trip to Lindisfarne as a fifteen-year-old, then examines the spiritual and personal distance he has covered since, the paths taken or not taken, the apologies not made, the small sins. We hear more of his current life with his wife and family (his wife valiantly holding the horses on their expensive retirement acreage during his journeying epiphanies), as well as past regrets, his delight in his first grandchild, and his various financial and emotional worries.

What is the sum total of one’s life? And how does one make a good death? Cuthbert’s lonely death is no help. Cuthbert was fed up with life, Moffat concludes, ready to die, as Moffat’s own parents were, so he reveals to us—a harsh reality we are then left to ponder. The existential answer, as ever, lies less in the destination than in what is gained during the journey; in Moffat’s case he’s left with the metaphoric travels of the soul in an anxious age, beset by uncertainties. Climate change, Trump and Brexit seem to be worrying Moffat unduly. Surely, I feel like saying to him as he agonises over these in his conclusion, you are over-thinking this? Keep calm and carry on, says an optimistic mantra I have on a plate in my kitchen as an antidote to kitchen disasters and the perils of any overwrought weltanschauung. Inscribed under the imprimatur of Britain’s Royal Crown, its sentiments a relic of another age closer to our own, it seems like useful advice in the face of Moffat’s dilemmas too.

The second legend surrounding Cuthbert concerns the indestructability of his body. In the Lindisfarne memories, Moffat was seeking the peace of St Cuthbert; but for an actual piece of this seventh-century saint, Lindisfarne is not the place: you have to go to Durham for that. St Cuthbert’s “uncorrupted flesh and bones” were carried around the region from place to place as sacred relics for some years by Lindisfarne’s faithful monks a century after this exemplary abbot’s death. This peregrination was impelled by the arrival in Lindisfarne of Viking marauders in 793, not the first and certainly not the last of these heathen attacks, but one of the most remembered of the massacres.

I’ve seen for myself in the Lindisfarne museum the bas relief depicting the attack, a scream in stone to the descending terror of such axe-wielding berserkers who had a more than metaphorical axe to grind into Christian skulls in retaliation for Charlemagne’s pogroms against their kindred Germanic tribes. They stole the bejewelled cover of Lindisfarne’s famous illustrated Bible, bound in doubled vellum hides that Moffat tells us determined the binding mode of all future books; the work itself now lies coverless in the British Museum. In such uncertain times as followed Cuthbert’s coffin around, with the Vikings moving to settlement over the north of Britain, the venerable St Cuthbert was claimed by Durham as resting safer inland, and there he remains as both a Christian inspiration and a profitable source of pilgrims to Durham Cathedral even to this day.

If you do buy this book and help Alistair Moffat along, for there is much in it that is worthwhile, then read it as a companion to two other recent books in a similar vein. On ancient pathways, archaeologist Francis Pryor (The Fens: Discovering England’s Ancient Depths) uncovers a Bronze Age Fenland trail right up to Lincoln from wooden Sea Henge near Peterborough, where dotted since medieval times along this ancient over-bog trackway rich in votive deposits are thirteen otherwise inexplicably situated churches, obviously a heritage of Pope Gregory’s injunction to claim the significant pagan places for Christ. Further to Moffat’s island journeying, you can then read seafarer Philip Marsden’s contemplative small wooden sailboat navigation of the remote western isles and coasts of Ireland and Scotland, The Summer Isles: A Voyage of the Imagination.

Elizabeth Beare wrote “Decoding King Arthur and the Grail” in the September 2018 issue.

One thought on “To the Sacred Isles”