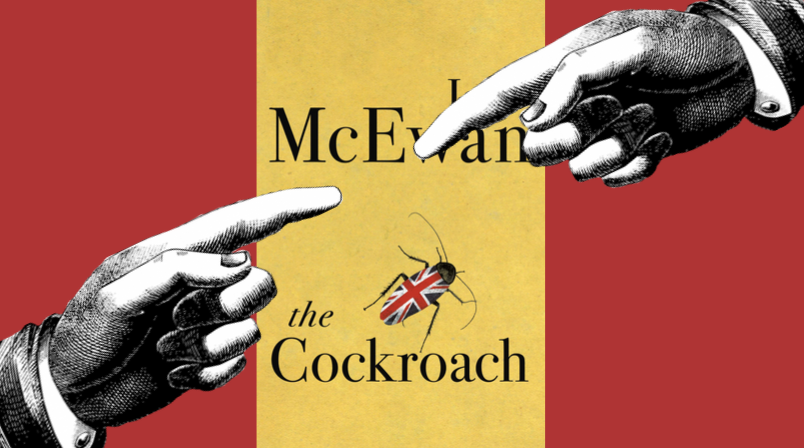 A new low in English criticism appeared to have been reached when novels like Middle England, Autumn and A Time of Lies received literary acclaim for the way they caricatured the dull, xenophobic, nostalgia-obsessed, Brexit-voting, provincial masses.[1] Arriving late upon the Brexlit scene, the Booker Prize-winning doyen of modern English letters, Ian McEwan, has nevertheless surpassed them all with his latest novella, an indignant assault upon those who had the temerity to vote Leave and unravel his Eutopian dream. The Cockroach opens with the Prime Minister, Jim Sams, waking to find himself metamorphosed into the eponymous bug. Symbolising the change from “lukewarm” Teresa May to a Johnsonian “die in a ditch” determination, this Kafkaesque transformation galvanises the Prime Minister to implement a bizarre economic policy to fulfil an earlier populist referendum commitment.

The satire assumes that the economic harm Brexit will cause resembles a fantastic scheme to reverse the flow of trade and finance. Economic “Reversalism” requires workers to pay employers and businesses to pay their consumers. “The landlord must tirelessly purchase manufactured goods to pay for his tenants. The government … expands its space programme in order to send out gifts to workers.” McEwan purports to discover elements of this revolutionary policy in the trade theories of early East India Company executives, Joseph Mun (sic) and Josiah Child.[2] McEwan clumsily mistakes Joseph for Thomas Mun, the author of A Discourse on Trade (1621). The fact that both Mun and Child, the most “avaricious” speculator in Restoration London, according to John Evelyn, outlined a version of mercantilism, not dissimilar to the EU’s common agricultural policy, also eludes McEwan’s shaky grasp of trade theory.[3]

On this dubious premise, a populist party promoting Reversalism proves electorally attractive to the usual suspects—the old, the poor, the stupid and the xenophobic. In 2015, the Conservative election manifesto promises a referendum on reversing the money flow. The referendum result “was the unexpected one, largely due to an unacknowledged alliance between the working poor and the old of all classes. The former had no stake in the status quo and nothing to lose … The old, by way of cognitive dimming, were nostalgically drawn to what they understood to be a proposal to turn back the clock.” Of course, both poor and old were also “animated by nationalist zeal”.[4]

The result stalls UK trade especially with its largest trading partner, Europe. The Germans find it particularly hard to agree to a reverse trade flow, “sending their cars to us stuffed with cash”. The UK would soon be broke.[5] The cosmopolitan, sensible, but increasingly bewildered Europeans “watched in wonder” at the “startling” referendum decision, but hoped “this nonsense would be shelved”. They assume that the rational opponents of Reversalism, the “Clockwisers”, in business, the media and government, who thought “turning the money around” a “daft idea”, would ultimately prevail. This reversion to reason seems likely, until the Prime Minister and his front bench metamorphose into an ancient, pheromonal brained swarm.[6] Predictably Reversalism finds support across the Atlantic. Populist US President Archie Tupper tweets in favour of the “good” UK prime minister and condemns “BAD” Europe.[7] In exasperation, the German Chancellor asks wearily, “Why are you doing this?” The Europeans, like McEwan, consider the referendum result and its aftermath a curious act of akrasia or self-sabotage.[8]

Achieving their nihilistic goal, the cockroach cabinet reverts back to their insect form. A “peculiar madness”, informs their activity, namely to make the general human population poorer and create the conditions for “poverty, filth and squalor”, the basis of a new world order in which the verminous will, once more, thrive.[9]

From McEwan’s alt-Remain perspective Brexit is for cockroaches. As such they deserve eradication. Interviewed on the BBC Today program, McEwan declined to say anything conciliatory about Leave voters. “Let’s stop pretending that there are two sides to this argument,” he said. “There aren’t.” Reinforcing the point on his website, McEwan asserts:

A reckless, self-harming, ugly and alien spirit has entered the minds of certain politicians and newspaper proprietors. They lie to their supporters. They express contempt for judges and the rule and norms of law. They seem to want to achieve their ends by means of chaos. What’s got into them?

The answer of course is that “certain politicians” and their gullible supporters have in a Kafkaesque manner metamorphosed into cockroaches in order to achieve economic and political chaos. His cockroach “mockery’, is thus a cathartic and “therapeutic response, though it’s hardly a solution” to Brexit.

Significantly, the Hutus called the Tutsis cockroaches (inyenzi) to dehumanise them. When pro-Brexit commentator Katie Hopkins used the term to describe illegal immigrants, she lost her job.[10] The new elitist double standard that has come to define contemporary debate sees the Archbishop of Canterbury condemn Boris Johnson for “inflammatory language”, whilst a Remainer novelist like McEwan using an incendiary term like “cockroach” receives plaudits for his wit, style and “panache”.

This is permissible it seems because as McEwan contends, and his literary admirers agree, he has merely written a “political satire in an old tradition”. In the Guardian, Fintan O’Toole extols McEwan’s “short sharp satire” in a Swiftian vein, written in “prose so finely wrought that the (financial) plan seems to have some genuine gravity. And this in turn makes it very funny.” The comic parable, O’Toole opines, “provides some relief from a political farce that has long gone beyond a joke”.[11] Sam Leith, reviewing the novel in the same paper, considers it “an enjoyable, cockeyed Brexit satire”.[12] Dorian Lynskey also lauds the novella as “a short, sharp satire designed to be swallowed in one gulp”.[13] Alex Moran praises “a concise, thinly veiled, satire of the Brexit debacle” that exhibits “moments of great clarity and insight”.[14]

Somewhat differently, Leo Robson in the New Statesman applauds McEwan’s “jeu d’esprit”, but considers it “a coda” to his “more substantive ventures”. In an exercise in “magic realism”, McEwan nevertheless alludes “to more troubling physical-philosophical quandaries, while positing an alternative history of economic thought that culminates in a wayward version of our present”.[15] In a similar vein, the Financial Times’s Robert Shrimsley writes that, although the work falls short of McEwan’s “usual standard” of brilliance, it still has “moments where McEwan’s wit and intelligence shine through, most obviously with his proxy Brexit policy—Reversalism”.[16]

It says a lot about our financial times that a financial correspondent considers Reversalism “a plausible exaggeration” of Brexit, or as Shrimsley eulogises, “there will be homes in the leafy suburbs of deepest Remainia where this work will be read with delight and lauded for its genius”. Not to be outdone, O’Toole contends that McEwan has crafted a “brilliant answer to the question of what could possibly be more absurd than Brexit. He is far too clever to try to compete directly with the real goings-on in Whitehall and Westminster. Instead, the great political project that is roiling Britain is as elaborately bonkers as those that Gulliver encounters on his third voyage: extracting sunlight from cucumbers”.

Ironically, O’Toole’s reference to Gulliver’s third voyage to Laputa and McEwan’s invocation of this “old tradition” not only expose Remainerdom’s elitist hypocrisy, but also its illiteracy. The poverty of this criticism reflects a failure to attend to the actual character of the English satirical tradition. Just as the Brexit social novel avoided the novelist’s critical responsibility to understand the psychology of those who voted Leave, McEwan writes his satire self-indulgently and “therapeutically” for a Remain constituency, or, as O’Toole puts it, “to comfort and entertain those who already believe that the Brexit project is deranged”.

Yet, both Swift and Alexander Pope, the founders of the modern English satirical tradition, were Tories and sceptics, alienated from the prevailing cosmopolitan, political and progressive delusions of their day. They returned instead to the moral insights of Roman and Greek writers like Juvenal and Menippus of Gadara, who used “extraordinary situations” to provoke and test prevailing philosophical or fashionable orthodoxies.[17] As Swift explained in verses on his death, “he lash’d the vice but not the name”.[18] Gulliver’s third voyage to Laputa, in fact, exposes the arrogance of a rationalist, ruling elite hovering over the mainland of Balnibarbi on a floating island obsessively devoted to mathematics, music, theory and “judicial astrology”. This self-important oligarchy “are under continual disquietudes, never enjoying a minute’s peace of mind, and their disturbances proceed from causes which very little affect the rest of mortals” such as the possibility that the earth might be swallowed up by the sun or destroyed by a comet.[19]

In the capital city of Lagado, Gulliver visits the Academy of Projectors exploring schemes to put “all arts, sciences, languages and mechanics upon a new (more rational) foot”. These projects included using the cobwebs of domestic spiders to make silk, generating food from human excrement and constructing a universal language by abolishing all words and replacing them with “things” that the speaker carries about with him for the purpose of conversation. Swift directed his satire at the pretensions of the English Enlightenment, the Royal Society and the application of a universal scientific method to social and political practice, or what Michael Oakeshott later identified as the modern problem of rationalism in politics. It is obvious, but evidently not to McEwan or O’Toole, where Swift’s sympathies would lie with regard to the rationalist, European project of ever closer union.

Swift’s satire on fashionable delusions, unlike McEwan’s, was successful for two reasons. First, his unfailing ability “to sustain concurrent multiple meanings” in both his political polemics and his satire.[20] Second, despite the elements of exaggeration, his satire on the scientific and political pretensions of his day was effective precisely because Swift set down before his readers “experiments actually performed by members of the Royal Society, more preposterous to the layman than anything imagination could invent” and hence more devastating in their satire.[21] This is precisely what McEwan’s satire fails to do. As Leo Robson writes, “as analogies go, Reversalism-Brexit … is pretty far-fetched”. A successful Brexit satire would have to propose an exaggerated version of monetary theory based on something other than nihilistically reversing the money supply. Reversalism might be a plausible satirical exaggeration of the economic theories of Pol Pot or the Labour manifesto of Jeremy Corbyn, but it simply does not caricature the free-market ideas and bonfire of bureaucratic regulation that informs the thinking of most prominent Brexiteers. It is in fact a stupid analogy.

Those who established the satirical vein in English literature, like Swift’s contemporaries Alexander Pope, John Gay, and Addison and Steele, who founded the Spectator, were sceptical of all political economic, scientific and rationalist schemes. They would have viewed McEwan’s effort worthy not of adulation, but inclusion in The Dunciad, Alexander Pope’s mock-heroic satire on the early eighteenth-century London literary scene. As in Pope’s day, the goddess dullness seems once more to have descended upon the city, creating the conditions where only dunces can thrive. “Ductile dullness”, of course, prefers “figures ill paired and similes unlike” that “with self-applause her wild creation views”. “Nonsense” of the Ian McEwan variety, Pope would consider “precipitate like running lead, that slipped through cracks and zig-zags of the head”, like, of course, “an industrious bug”.[22]

David Martin Jones wrote the article “Brexit and the Decline of the English Novel” in the September issue.

The Threat of a Nuclear Iran