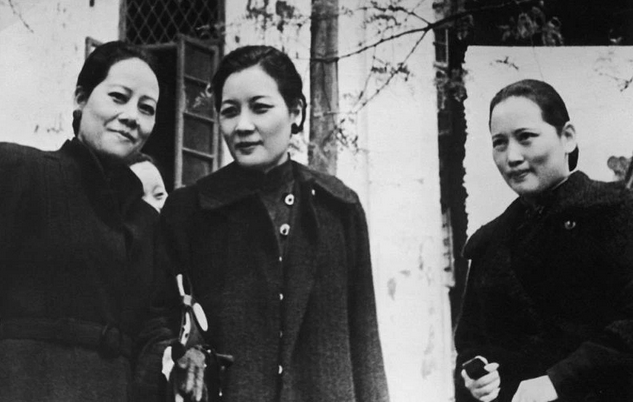 In the history of the Chinese Republic (1912 to 1949), there are few families which achieved the wealth, political power and sheer glamour of the Soong family. The patriarch, Charlie Soong, rose from a humble Methodist missionary to found one of China’s biggest publishing houses, and to become a close friend and funder of Sun Yat-sen. The matriarch, Ni Guizhen, was descended from the first Jesuit Chinese convert in the sixteenth century. Their eldest son, T.V. Soong, was the Chinese revolution’s financial genius and occasional Finance and Prime Minister. The three Soong daughters, Ailing, Chingling and Mayling, pulled strings behind the scenes of China’s most powerful men and, in Mayling’s case, alongside them. They were nicknamed Aiqian (“loves money”: Ailing, who married H.H. Kung, Prime Minister of China), Aiquan (“loves power”: Mayling, who married Chiang Kai-shek) and Aiguo (“loves country, patriot”: Chingling, who eloped with Sun Yat-sen and became Vice-Chairman of the People’s Republic of China). They have always been controversial and are possibly best known outside China from Sterling Seagrave’s savage and inaccurate hatchet job, The Soong Dynasty.

So it was with a mixture of anticipation and trepidation that I picked up Jung Chang’s biography of the Soong Sisters, Big Sister, Little Sister, Red Sister. I say trepidation because for me Jung Chang has a mixed performance as a historian. The sheer venom with which people in China talk of her biography of Mao suggests that she must have been doing something right, and she gave us an excellent biography of the Dowager Empress Cixi. But there are flaws. She has a tendency to jump to extravagant conclusions which aren’t backed by evidence. For example, in the Mao book, she has trouble understanding how, during the 1934-35 Long March, the communist forces were able to avoid Chiang Kai-shek’s forces and march thousands of miles through Western China. Her interpretation of the reasons for this is that Chiang allowed it because he was negotiating with Stalin for the release of his son, Jiang Jingguo, who had been in Russia since 1925. The most probable explanation is that Chiang’s control over Western China was purely nominal and his military power there was zero. But this doesn’t stop Chang from taking this great leap of faith, one which she repeats in this volume.

She also takes extreme positions on people, which can lead to unfortunate outcomes. Let me give two examples: her attitudes to Sun Yat-sen and to China’s first president, Yuan Shikai.

Chang hates Sun Yat-sen, considering him foolish, self-obsessed and brutal. Fair enough. Many observers of Sun would call him self-obsessed. W.H. Donald, the great Australian political adviser to many of China’s leading politicians including Sun, described him as “mad as a hatter” and a “pitiful uneducated, incapable charlatan”. But Chang’s hatred of Sun leads her down some strange paths.

Let’s take the case of Song Jiaoren. In 1913 in China’s first democratic elections, the Kuomintang (KMT), led by Song Jiaoren, was the largest party and Song was widely expected to become China’s first Prime Minister. This put him into direct conflict with the president, Yuan Shikai, who proposed a constitution like the German and Japanese constitutions with a strong executive, ultimately a monarchy, and a weak legislature. Shortly after, Song was assassinated by persons unidentified but believed by almost everybody to be under the orders of Yuan Shikai. But not Jung Chang—she says Sun Yat-sen did it because he was jealous. Evidence? None.

Her attitude to Yuan Shikai is unorthodox and supportive. This is not entirely unreasonable. Yuan has had a bad press outside China mainly because of his attempt in 1916 to become emperor. In reality he was a reforming figure under the empire and his ambition was to restore the empire under a constitutional system, something in which he was widely supported—his reign title as emperor was to be “Hong Xian” or Glorious Constitutionality. But Chang goes much further than this. Because Yuan and Sun Yat-sen were in constant conflict, she takes the view, Sun bad, therefore Yuan unable to do evil. Jung Chang portrays Yuan’s rule as democratic, liberal and a paradigm of political virtue. The reality was otherwise. After the assassination of Song Jiaoren, Yuan banned the KMT, the biggest party in parliament. Does an ideal democrat murder his opponents and ban the biggest party in parliament? At this stage, most of the southern provinces declared independence and in the north which theoretically remained loyal, local military commanders were independent and at war with each other. Jung Chang’s ideal democratic wonderland didn’t exist. With Yuan’s death, the northern government fell into the hands of Duan Qirui, head of the Beiyang Army. Anywhere else you’d call this a military coup, but not Jung Chang. She describes Duan Qirui as a “much admired man” who “commanded respect from people of different walks of life”. Most other people describe him as China’s most hated historical figure of the republican period.

Chang’s views on the relations between the Soong sisters and Sun Yat-sen bring us into the realms of fantasy. Chingling eloped with Sun, despite the opposition of her parents. She was twenty-one, he was fifty-two. She was clearly smitten. But Chang, because of her low opinion of Sun Yat-sen, tries to demonstrate that the marriage was a farce and that as time went on Chingling stopped loving Sun. Their marriage in Japan was “a show for the benefit of this 21-year-old who was mission educated and to whom marriage was essential”. That wasn’t what Chingling said in a 1972 interview with the American journalist Edgar Snow:

I had no knowledge that he had gone through a divorce proceeding and that he intended to marry me until I arrived … When he explained his fear that I would otherwise be called a concubine and that this would harm the revolution, I agreed.

Chang says that Ailing and her husband H.H. Kung shared a strong dislike of Sun’s war against Yuan Shikai and Duan Qirui’s northern clique, which begs the question of why they were active participants in his Canton government and not in Beijing supporting Yuan and Duan.

In too many cases, Chang is also careless with historical fact. Let’s look at a couple of examples. She describes Moscow’s man in Canton, Borodin, as a “Belarusian”. Well yes, the shtetl where he was born is now in Belarus but he would describe himself as a Yiddish-speaking Russian Jew. She says that the Trinidadian Chinese revolutionary Eugene Chen was Sun’s “English secretary”. Yes, he probably corrected Sun’s English but he was more famous as the Foreign Minister of the Red Wuhan Government of 1926-27. She says that Chiang Kai-shek’s armies took Wuhan in 1926. Actually Chiang marched through Jiangxi towards Shanghai. Wuhan was taken by forces led by the Sovietniks, Soviet officers leading KMT troops. This is not a small mistake, since Chiang’s absence meant that the Soviets could establish Red Wuhan with pictures of Lenin in the streets, an excess which led to their eventual downfall. She accuses Sun Yat-sen of deliberately delaying his 1925 talks in Beijing on unification of north and south China by taking a ship from Canton to Tianjin and Beijing instead of a train. Which would be fine except there were no trains from Canton to Beijing in 1925 and ship was the normal and quickest means of travel. Chen Jiongming, Sun Yat-sen’s military backer in Canton, she describes as a “mere official”. Actually he was a member of the Guangdong Provincial Assembly under the empire and military governor of Guangdong under the republic. Chang says flatly that there was “no evidence” of an affair between Mayling Soong and former Republican presidential candidate Wendell Willkie during his 1942 visit to Chongqing. Well, yes, nobody was in the room with them, but there was ample evidence of goings-on.

But then as I read on I thought maybe I was being a little over-critical. On the plus side, her treatment of the Soong sisters is more favourable than we have come to expect from authors in English. There was unemotional discussion of the accusations of corruption against Ailing and her husband H.H. Kung, who was Chiang’s Prime Minister. Only a foolish person would ignore these accusations, especially in military aircraft acquisition where the Kungs were accused of taking enormous “squeeze”, but against this it is rarely mentioned that the Soong family was rich from legitimate business activities inherited from their father and managed with great skill by Ailing. I suspect that some (but far from all) of the “corruption” could be accounted for by the fact that people in their position were often shown business opportunities which they took advantage of (this is the excuse adopted by Lee Kwan-yew when he was accused of corruption). Lines between public and private were also more blurred than we are accustomed to.

I was also impressed by a lot of information which came to light from Chinese sources—I am thinking in particular about information on dealings between the Young Marshal, Zhang Xueliang and the communists before and during the 1936 Xi’an Incident where Zhang kidnapped Chiang Kai-shek. There was also new (to me) material on dealings between Chiang and the Soviets throughout the 1930s.

Finally, let me indulge a personal bête noire. Historically there have been competing systems for transliterating Chinese but now the official Pinyin system is fully established. Despite that, transliteration in this book is inconsistent, varying between the old Wade Giles system and Pinyin without consistency or logic. Sometimes (Shangdong for Shandong!) it’s just wrong. There is no excuse for an editor not taking the trouble to find somebody to proofread with this in mind.

On balance, this is a heavily flawed book, but I would encourage you to read it as a counterfoil to other works about these remarkable women. They are much better and more accomplished people than their critics would have us believe.

How High Can Everest Rise?

Standing Up and Speaking Well

The Measure of God, by Larry Witham